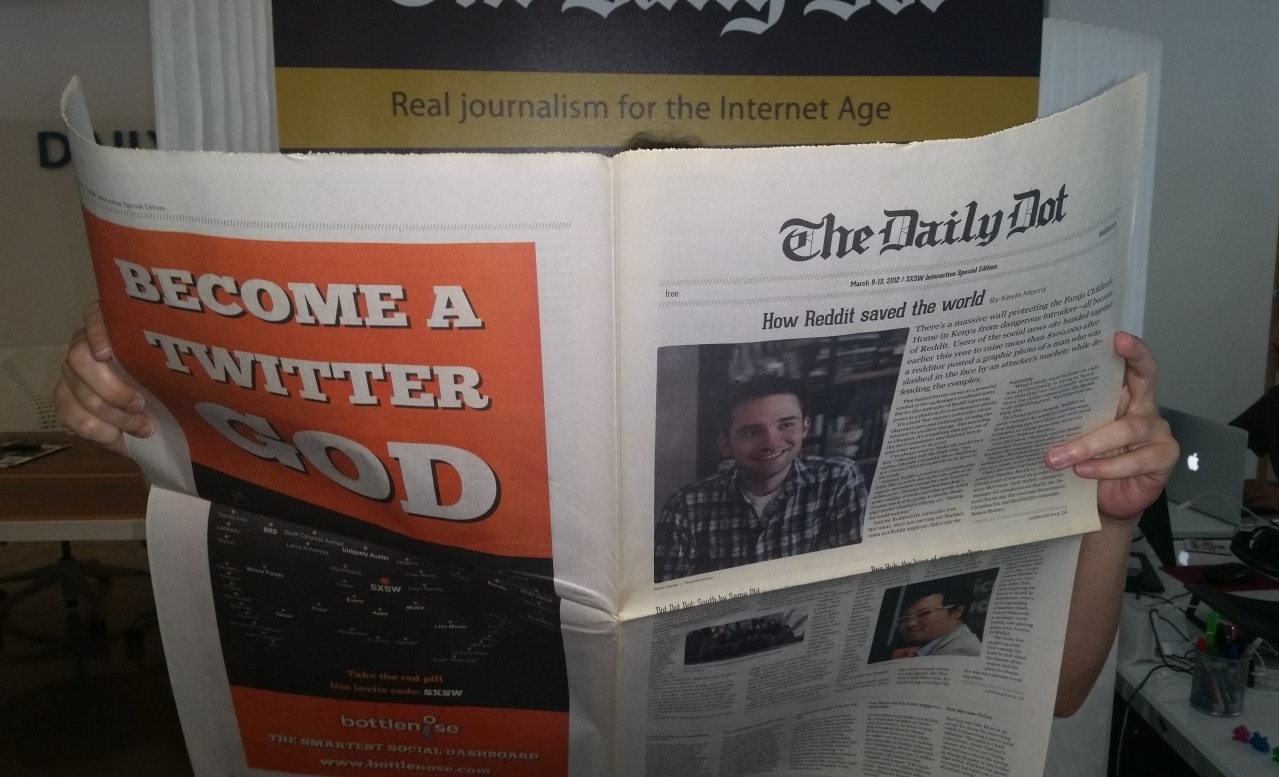 Photo of the author's publication, The Daily Dot, which published a special print edition for the SXSW conference. Courtesy photo.

A few months ago, noted investor Marc Andreessen proclaimed his bullish-ness about the state of the news industry, predicting it would grow 100 times. It was a nervy claim to make, in a time when snackable content is all the rage and virality is the most coveted status in media. So no one was surprised when he personally funded some of that growth; his venture firm Andreessen Horowitz was the sole investor in BuzzFeed’s stunning $50 million round announced last month. The news got the media and tech worlds buzzing (sorry) once again about what constitutes journalism in the digital age and how to best serve audiences growing consistently hungrier for content.

As a sixth-generation journalist and one who has studied, written, and worked in many forms of journalism, I was particularly fond of Andreessen’s prediction — and that he followed it up by putting his money where his mouth is. I’d argue though that the smartest bets in media are going to be companies that fulfill the best values of traditional journalism through the means and necessities of the new digital landscape. The biggest winners will be those who combine old-school news-gathering methods with the distribution technology that makes sites like BuzzFeed such powerhouses.

"Snackable content has its place, no doubt. But so do the full-course meals. Ultimately, the money is going to flow to those who can create those meals for readers at a scale."

I’d make that bet, not on the strength of any idealism or sentimentality about newspapers, but because the values of traditional journalism are product qualities that were developed dynamically in the market over decades. They are, in fact, what people want. As we’ve abandoned those values, readers have experienced a steep drop in trust of journalism over the past 25 years — and the business model has declined right alongside it.

Many forms of online journalism only accelerate that trend. We so often give readers less and less new information, re-packaging content into bite-size pieces that require little thought or analysis, we’re making them more facile with less information. At some point, we assumed the media-consuming public needed to be explained to, because that is what’s easiest to get people to click on. But as we continue following that sharp yaw, it is leading us closer to the news singularity — the perfect future, when we will have just one news story that can be unpacked, and illustrated, and packaged, and re‑packaged. For millennials, for olds, for moms, for dads, for conservatives, for liberals, for libertarians. One perfect story that will serve as the cold fusion for ‘content’ companies.

Ultimately, though it may generate clicks in the short term, pursuing such a strategy will undermine the digital business model as surely as the downgrading of journalism has undermined that of traditional media. If we peer past the oceans of snackable content, we can see clear evidence that people still want the same things from journalism that they always did.

Recent in-depth, carefully crafted articles in Wired and BuzzFeed held readers’ attention for averages of 18 and 25 minutes, respectively. Readers are hungry to be talked up to, for publications to stand shoulder-to-shoulder with them, interesting them in what’s important, and giving them something worthy of reflection. It’s not something they can do every day, but it is something they still want to do.

There’s a significant opportunity to bring analysis and thought back to digital media; yet few of us are attempting to. Publishers continue to chase the ever-elusive virality quotient and their readers reward them — by following the next viral hit to another site. Elevating the reader’s experience past listicles and recycled story bullets, but instead giving them engaging, enriching experiences, should be something we’re all striving for. It is possible to achieve both breadth and depth, qualities newspapers have achieved for over a century (the good ones at least). Snackable content has its place, no doubt. But so do the full-course meals. Ultimately, the money is going to flow to those who can create those meals for readers at a scale.

Nicholas White is the co-founder and CEO of The Daily Dot. Nick is a sixth-generation journalist and it is figuratively true that he has ink running in his veins. A lover of newsrooms everywhere, Nick was formerly with Sandusky Newspapers, where he was most recently vice president of audience for its Midwest division. He still sits on Sandusky’s board of directors. He has two dogs, Hunter and Oscar, named for Hunter S. Thompson and Thompson’s attorney, Oscar Acosta. Follow Nick at twitter.com/desertbunny, facebook.com/desertbunny and http://weblog.nicholaswhite.me.