In Iran, Is the Honeymoon Over for Press Freedom? 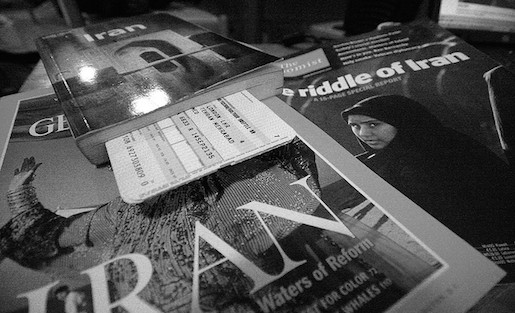 On July 31, a prominent Iranian journalist tweeted, “Saba’s mother has now joined Twitter.” Saba’s mother Akram Mohammadi, had just given an interview about her daughter Saba’s agonizing 65 days of pretrial detention at an unknown location. Unidentified security officials had arrested Saba Azarpaik, a Tehran-based journalist, on May 28.

A few hours later, the Twitter account linked to her posted this message: “Mr. Rouhani, you promised that our children would no longer be arrested for writing articles and reporting … So what happened?”

"The sharp downturn in media freedoms suggests a worrying deterioration of human rights in Iran."

One year after President Hassan Rouhani took office on Aug. 4, 2013, with a popular mandate to bring change, journalism and media freedoms are in a state of disarray. Saba Azarpaik has become one of the victims of a seemingly harsher security environment in the country.

When Rouhani took office, there was cautious optimism that things would get better, even if the process would be slow. Much of this had to do with the media atmosphere that seemed to be opening up, with Rouhani himself several times hinting that he favored a freer media environment. An increasing number of Iranians, including members of the ruling elite such as Rouhani, Supreme Leader Ayatollah Ali Khamenei and Foreign Minister Mohammad Javad Zarif, began accessing and joining popular social sites like Twitter, Facebook, and YouTube — somewhat ironically, given that these sites are blocked in Iran.

More foreign correspondents reported from Iran. Local papers interviewed U.S. government officials, and Iranian journalists began reaching out to colleagues in other countries via Facebook and Twitter. The authorities appeared to be arresting journalists a little less frequently, especially during the first half of Rouhani’s first year as president. Even cabinet ministers began debating the issue of government censorship.

Now, it seems, the honeymoon, such as it was, is over.

Iranian security and intelligence forces have in recent months aggressively targeted journalists and social media activists. Seemingly in lockstep, revolutionary courts are issuing harsh sentences on all-too-familiar vague and “catch all” national security charges, such as “propaganda against the state,” “collusion and assembly against the national security,” “disseminating lies” and “insulting” government officials.

Saba Azarpaik reportedly faces trial on these vague national security charges. Her mother believes she is undergoing harsh interrogations, in part, because she reported on a brutal attack in April by prison guards against political prisoners in Tehran’s notorious Evin prison.

Azarpeik joins at least 10 other journalists who have been summoned for imprisonment, arrested or detained for doing their jobs since May. The list includes two Tehran-based correspondents for foreign-based news outlets — Jason Rezaian, the Washington Post correspondent, and his wife, Yeganeh Salehi, who works for Dubai-based The National. Little is known about why they were arrested, where they are being held and what treatment they are receiving.

The situation is not much better for social media activists. On July 31, the day Mohammadi opened her Twitter account to make a plea for her daughter’s release, the website Saham News, which is close to opposition figure and former presidential candidate Mehdi Karroubi, reported that authorities had arrested seven social media activists in the northeastern city of Mashhad. Karroubi and four other opposition figures were placed under house arrest, where Karroubi remains to this day after the disputed presidential election of 2009. He has faced no charges.

IranWire is just one of the media outlets calling for Saba Azarpeik’s release, according to Twitter.

A month or so earlier, a revolutionary court in Tehran sentenced eight Facebook users to a total of 127 years in prison for allegedly insulting or criticizing government officials and “religious sanctities,” among other crimes. And then there were the seven young people arrested for participating in a video showing them dancing to a popular song on YouTube in May. After being forced to appear on television to “confess” to their crimes, they were released. In what appeared to be a rare showing of support for those arrested, President Rouhani tweeted: “#Happiness is our people’s right. We shouldn’t be too hard on behaviors caused by joy.”

With 65 people behind bars as of July, Reporters Without Borders says that Iran is one of the largest prisons for journalists and “netizens” in the world.

Overall Rights Situation Has Not Improved

The sharp downturn in media freedoms suggests a worrying deterioration of human rights in Iran. There have been a few nods to human rights over the past year, including a half-baked effort by Rouhani’s government to initiate public debate on a draft Citizens Rights Charter, but there has been no substantive and sustained improvement in the country’s rights situation.

In fact, a review of the key areas for rights reform identified in an August 2013 open letter Human Rights Watch issued to then-president Rouhani shows a grim picture. Not much has changed, and in a few areas, things have actually gotten worse. The number of executions, including of people sentenced for offenses committed when they were under 18, and inhumane punishments such as floggings and amputations, continue at a frightening pace. A large number of political prisoners arrested following the 2009 presidential election are still in detention.

The situation for religious minorities also remains dire, with at least 136 Bahais in prison as of December 2013 solely for their peaceful activities. Authorities prevent many independent rights organizations, labor unions and professional bodies such as the Iranian Journalists Association, from operating. And the government appears to be going backward on women’s rights, especially reproductive rights.

So, to echo Mohammadi’s July 31 tweet to Rouhani, what happened to the rights promises Rouhani made during and after his presidential campaign? There are many reasons why the rights crisis in Iran has continued. For one thing, Rouhani’s government decided to spend its political capital on reaching a nuclear deal with the United States and other key states – the P5+1 – which many Iranians, including prominent rights activists, support and consider a priority.

More importantly perhaps, some of the country’s most powerful agencies and institutions, such as the intelligence and security forces, are beyond the immediate control of the president and his appointees, and continue to act as a law unto themselves. These, along with a judiciary that systematically applies laws in an abusive manner, are the agencies and institutions that undoubtedly perpetrate the most serious rights abuses, and do so with impunity. The recent spate of arrests of journalists and social media activists may reflect an intense power struggle behind the scenes — one that pits the president and reformers against hardliners within the security and intelligence sector who are bent on using human rights to sabotage Rouhani’s efforts to reach a nuclear deal and tarnish his image as a moderate.

All of this may be true. But it does little to assuage the pain of Mohammadi and the thousands of Iranians who continue to suffer terrible abuse at the hands of their own government. The reality is that Rouhani is the country’s top elected official. He entered office with a large mandate and swore to uphold the country’s constitution. He and his cabinet should be held to account.

So while the international community, including rights groups, should do more to put direct pressure on those responsible for the vast majority of rights violations in Iran, they should not let President Rouhani and his cabinet off the hook. Until and unless Rouhani speaks out more forcefully, and in more specific terms, against the egregious rights violations happening in the name of his government, Iranian mothers like Mohammadi will continue to ask him: So what happened?

Faraz Sanei is the Iran researcher with Human Rights Watch’s Middle East and North Africa division. Faraz produces detailed reports, news releases and op-eds based on his findings, and conducts local and international advocacy surrounding human rights issues affecting Iran. He was previously at the Iran Human Rights Documentation Center, where he served as interim executive director, program director and senior human rights lawyer from 2008 to 2009. He is also a contributor to Foreign Policy In Focus.

This article was originally posted on Foreign Policy In Focus and also appeared on the IFEX Network.

One response to “In Iran, Is the Honeymoon Over for Press Freedom?”