How Civic Crowdfunding Can Foster Collaboration Between Cities and Citizens 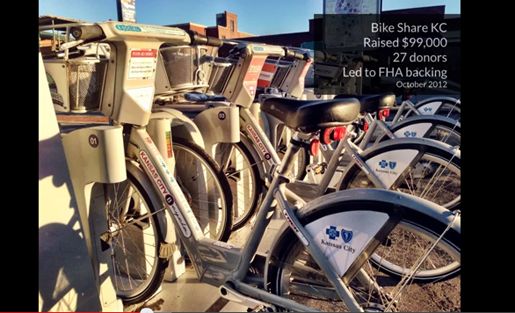 At the Academy of Management’s Annual Meeting in Philadelphia this week some colleagues and I gave a panel titled Towards Government 2.0: Open Data and Innovation through Cross-Sector Collaboration. We talked about open data, building better and more open government services, and how to foster civic collaboration across sectors.

Unfortunately I wasn’t able to be at the meeting in person (I’m in the midst of relocating to San Francisco), so I contributed a video in which I talk about some of the work I’ve done on crowdfunding in cities.

"In civic crowdfunding there's another layer of possible collaboration, between the crowd and cities, because cities are likely to have an interest in almost any project that provides a service to a local community."

how the crowd collaborates

The crowd in a crowdfunding campaign collaborates ambiently – by contributing in the same place, they benefit from mutual awareness and together create a movement that has momentum. But in civic crowdfunding there’s also another layer of possible collaboration, between the crowd and cities, because cities are likely to have an interest in almost any project that provides a service to a local community. That interest could be regulatory (the city regulates the use of a particular kind of space or activity), or it could be participatory (the city wants to know what’s going on and to support good ideas). Those interests could be construed positively or negatively, depending on the relationship between the city and the project participants – the city could be perceived as supportive and welcoming, or heavy-handed and interfering.

Crowdfunding has the potential to help structure those relationships positively, if cities and project owners approach the project in the right way. The substance of my talk, which you can check out below, is to give four suggestions for how cities can frame their involvement in civic crowdfunding projects to deliver the best outcomes. You’ll also be able to read more on this in an upcoming collection I’m contributing to on Smarter Cities, edited by Esteve Almirall and Boyd Cohen.

As ever, your comments and feedback are much appreciated. Now that I’m in the Bay Area, if you’re local and working on similar topics, please reach out.