Want to Come Up With a Good Startup Idea? Throw Away a Bunch of Bad Ones 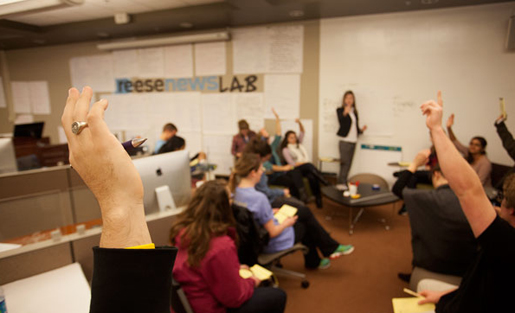 Students vote on ideas for media products to pursue for the spring 2014 semester. Photo: Sara Peach

The startup process is a dramatic roller coaster ride. It’s thrilling when you discover new gold mines, but crushing when you realize that your ideas are not that novel.

My team had to go through the ride four times.

"Before letting go of an idea, you must have at least put up a fight and explored all the possibilities available."

Looking back, the biggest lesson I learned in the past six months is having the courage to admit the fallibility of an idea, letting it go, and moving on to the next idea. But before letting go of an idea, you must have at least put up a fight and explored all the possibilities available.

That’s how we went through four ideas in six months. In the beginning of January, my team was tasked with creating a business model for Powering a Nation, which is a media production team housed within the School of Journalism and Mass Communication that focused on energy issues in the U.S.

We started with the idea of becoming the “cash cow” of Powering a Nation by being an advertising agency. But that idea faded quickly when our research showed that the advertising field is saturated and nothing would differentiate ourselves.

So we let it go and moved on to the next idea. We would be Digital Forest, a creative consulting agency that connects clients with Powering a Nation alumni to produce green-themed commercials. We’re environmentally conscious and we have talented designers. Isn’t that what the market needs now?

Even though the answer is in the affirmative, the people who really need this service can’t afford to pay for it, while the ones who can already have huge advertising agencies up their sleeves. In addition, coordinating with freelancers can be difficult and confusing. The biggest flaw in our idea: companies might approach the freelancers themselves, bypassing us.

Letting go of this idea was a unanimous agreement. We knew deep down that it was a tough feat to pull off that wouldn’t promise enough benefits. So we moved on, again.

The ‘bits and pieces’ plan

This time we came to our “bits and pieces” plan, as we posthumously call it. We planned to fund Powering a Nation by hosting multimedia workshops, selling old footage, and organizing premieres.

It was a doable plan, but we were bored. It felt too forced and it wasn’t sustainable.

So we gave up and went to the meeting table again, ready to rack our brains for the fourth and hopefully, last time.

The last change was the most radical one. Why not change the summer project into a year-long one? Why not turn it from an annual special report to a news desk? We will be an environmental news desk that presents environmental issues through visually attractive media, thus still preserving the strengths of Powering a Nation.

Research kicked off and conversations began. The idea garnered more interest and momentum than any others did. It fit in snugly with the school’s mounting interest in environmental communication. I’m pretty confident that this is our final idea.

Yet arriving at this final stage wasn’t easy. A few weeks ago, we were in the pits when we realized that sustaining a news desk through grants does not solve the problem. But this time, we stuck our foot down with this idea because we really believed it will work.

So six months and four ideas later, we are at this peak. I don’t know what will happen in the future or what other obstacles may surface.

But whatever it is, we won’t give up without a fight.

Zhai Yun Tan(Nat) is a student intern in Reese News Lab, an experimental media and research project based at the School of Journalism and Mass Communication at the University of North Carolina at Chapel Hill. She is junior with a major in journalism and minor in environmental studies. As a transfer from Malaysia, Nat enjoys observing American culture and eating Southern food. Find her on Twitter @Zhainatyun

4 responses to “Want to Come Up With a Good Startup Idea? Throw Away a Bunch of Bad Ones”