Teaching Entrepreneurship? Steps to Setting up a Partnership 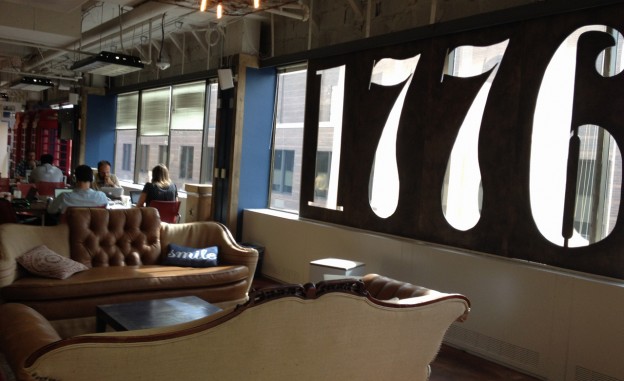 President Obama’s visit earlier this month to 1776, the startup hub in downtown Washington, D.C., shined a spotlight on entrepreneurship and innovative thinking nationwide. It was a good location because the contemporary, well-lit loft that incubates and supports area startups has grown from zero to 215 members in only a year-and-a-half.

"Make sure there is a clear understanding of what the university wants... and what the incubator wants." -Evan Burfield, co-founder of 1776

The president’s visit highlighted two entrepreneurial stories, not only of 1776 but also of the early steps by American University involving its Masters of Arts in Media Entrepreneurship program (MAME) and two campus collaborators. We became the hub’s first university partnership in a fruitful relationship that could be repeated at other campuses across the country.

Students in the first two cohorts of the MA in Media Entrepreneurship mingle at a networking reception at 1776. Photo courtesy of American University.

The partnership has benefited faculty and students, as well as cemented cooperation across schools at our university. It left one MAME graduate particularly pleased, since he later joined 1776 as an entrepreneur, and the day of the presidential visit, he shook Obama’s hand.

We heard about 1776 early on from a well-connected adjunct teaching communication law, Barbara Wall, chief counsel of Gannett. The dean of the School of Communication and the program director visited the then-unopened, unpainted empty facility across the street from The Washington Post.

We next pulled together a coalition of AU schools with entrepreneur-focused academic programs, our own plus the Kogod School of Business and the Social Enterprise program in the School of International Service, and hammered out an agreement for access to space and programming for faculty and students, including discounts. We also have access to space for a number of hours each month, which we’ve used for networking, classes, recruiting, receptions, meetings and a recent workshop on personal and business branding.

What’s in it for 1776? Co-founder Evan Burfield points to several plusses, including one that “young people coming out of grad or undergrad degrees bursting with ideas” are a great source for founders of companies. He also wants to give students exposure to the startup network if they are pursuing this path, and thus he looks to universities as a “great source of building community.”

As we close in on a year of the partnership, we thought we’d share some tips for other campuses, a topic we touched on recently at CUNY’s well-received summit on teaching entrepreneurial journalism.

1. Let your faculty decide how to use the space: Some of our faculty members hold “office hours” at 1776, both for their own students and for startup leaders. This keeps faculty fresh on the startup scene, and allows entrepreneurs to learn directly from AU experts.

Pilar McKay, a public communication professor, has counseled 10 to 12 startups in communication planning during weekly two-hour sessions. She’s also invited startups to speak to her classes, resulting in at least one impressive student being nabbed as an intern.

McKay writes in an email that 1776 has startups at various levels of maturation. Communication challenges range from time management and press strategy to branding. “Sometimes I feel like I am a communication therapist,” says McKay, who loves the relationship. “I listen to their issues, help them prioritize, and explain many of their issues are the same ones communication professionals are challenged by as well.”

Other faculty members hold classes there, meet students or just show up to meet with each other. None of this was planned.

2. Host a media clinic: Three AU faculty members met with Katharine Rust, managing editor of The Trip Tribe, to offer advice in our first “media clinic” last spring. Our group included Andrew Lih to talk about Wikipedia, Scott Talan on social media and Lynne Perri on visual design. Lih also helped 1776 staff work with Wikipedia’s editors to remove inaccuracies from their entry and to improve it.

The faculty looked closely at The Trib Tribe, deconstructing the site’s presentation and language choice. The upshot: The entrepreneurial travel site rewrote sections, including the “about” page, to be more clear and concise than what had been there previously. The new language was straightforward: “Our story” and “How it works” posts now allow people to immediately see that this is not just another travel website, but one that will create trips around shared interests among friends or strangers.

Rust wrote two follow-up emails, thanking us for our 45-minute meeting and showing us the end result. “Since we created the About Us section on our home page, traffic through to the site and conversion for sign-ups has increased upwards of 30 percent, which is fantastic,” Rust wrote.

3. Cast a wide net internally: Anyone who works at a university knows coordinating across schools is not easy. It was worth it. At AU we pooled resources and brainpower and now enjoy a cross-campus camaraderie as we discover common needs across academic programs. Probably the most complicated internal negotiation was about the sign that hangs over our table there, which we’ve already changed once.

It is no surprise that co-founder Burfield suggests incubators and workspaces “have to have patience working with universities,” which are “vastly larger than most people appreciate.” Corporate partners generally move much more quickly.

He advises other universities and partners to go in with an end goal in mind. “Make sure there is a clear understanding of what the university wants to get out of it and what the incubator wants,” he suggests.

4.  Bring students in: Students love being in this space, which resembles an open-newsroom floor plan. They occasionally reserve space to swap knowledge in their own skills-sharing workshops, something else we didn’t predict. They have access to 1776 programs as well. We are working to increase the access.

Travis Dougherty of DeafTV and an AU MAME alum, meets the president at 1776 in early July. Photo by Christine Laccay.

5.  Think of the partnership as a relationship (and take the time to develop it): We’re always looking for opportunities for our students as interns or in entry-level jobs as these entrepreneurial startups take root. But we also have found some surprises in building other relationships between entrepreneurs and faculty.

Jordan Lloyd Bookey and her husband, Felix Brandon Lloyd, started Zoobean, an online service that curates books, apps and other resources for parents and kids. We had talked informally with them — Jordan, a former teacher, also had been head of K-12 education at Google, and Felix is a former DC Teacher of the Year — because we happened to see their cool sign and were curious about what they did.

“I met Amy by serendipity, which happens a lot at 1776,” Bookey said recently of the program director. We’ve all found this to be true: You’re not always sure who you’re sitting next to or what new organization might be around the corner or who might be making a PB&J in the kitchen when you walk in to make tea. Eisman later approached Bookey about judging a pitch session in which MAME students had to present their ideas and business plans, which she gladly did.

A few weeks later, Bookey was looking for help with ideas for a blog post for her site about dads and their influence on their children’s lives through reading. She sought Perri’s advice on how to edit and display the many statistics she had collated. A few email exchanges later, and the results went out to Zoobean’s subscribers as an infographic, showing how often dads read and when; whether they take their kids to the library; and whether fathers being active readers makes a difference.

“A lot of us are pretty far from school right now so it’s really nice to have those in practice or academia or a mix,” Bookey said. “A lot of learning is happening here, not just doing.”

In the interim, Zoobean has gone on to fame and ideally fortune — the husband-and-wife team presented their startup on TV’s entrepreneurial program, “Shark Tank,” and earned Mark Cuban as an investor. They have now moved from 1776 to new space in Arlington, Va., although they are still members in 1776.

6. Don’t worry if you are not in a major metro hub: Not all entrepreneurship programs are near big incubators. Michelle Ferrier is expert at navigating such geographic challenges. Ferrier is the associate dean for innovation, research/creative activity and graduate studies in the Scripps College of Communication at Ohio University. “Geography does place some constraints on what you do,” she said. So at Ohio University, “we built our own infrastructure.”

That means labs to support media entrepreneurship projects for two to three undergrad teams at a time, and then a Digital Media Incubator, in conjunction with the university’s Innovation Center, to support projects by students and the community with funding, office space for rent, mentoring, coaching and connections to regional venture capital.

Ferrier is also developing a new center to support media entrepreneurship activity and faculty capacity.  Meanwhile, external partnerships are still being sought. “One of my goals is to make inroads into the local accelerator programs,” she said, referring to Cincinnati, Columbus and Cleveland.

Likewise, AU’s Kogod School of Business is opening an Entrepreneurship Incubator this summer, offering co-working space, faculty coaches, mentors and other resources for incubator teams. Students from across campus are eligible to apply.

7. Create the entrepreneurial “tone” where you are: Meanwhile, 1776 Co-founder Burfield has additional advice for universities not near major metropolitan areas. Even if you are not interested in partnering with a large-scale incubator or hub, “you should recognize that space and tone really matters,” he said, referring to opportunities closer to or on campus.

“You can’t expect employees to come to the same offices and cubicle farms and fill out the same forms and then say, ‘Go be really innovative.’ You need to create a place with a sense of otherness to it,” he said.

Lynne Perri is a journalist in residence and managing editor of the Investigative Reporting Workshop in the School of Communication at American University. Amy Eisman is the Director of Media Entrepreneurship & Interactive Journalism, also in SOC at AU.