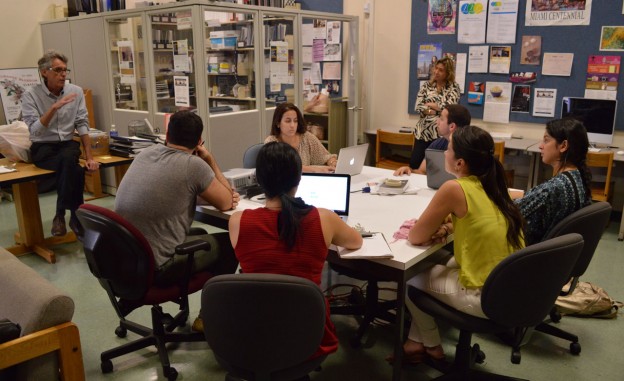 Every now and then I receive a call from a dean or chair of a journalism or communication program. They lament deficiencies in their students’ language skills and writing, and they are calling me because they’ve heard of our school — a multilingual bouillabaisse of an institution with four languages spoken (English, Spanish, Portuguese, and Creole). We’re known for our successful digital English language skills program, including a grammar test that students must pass as a prerequisite to taking our introductory writing course.

Many have also heard that our school has developed a reputation for producing strong writers, increasing our internships, scholarships and job placements in media and mass communication markets, which increasingly want bilingual professionals.

"All the studying taught me grammar, but it didn't teach me to tolerate others ... with bad grammar. Now, I can't stand people who want to jog or run further or keep things between you and I. Kills me.” - Silvana Ordonez

Florida International University (FIU), where I am associate dean in the School of Journalism and Mass Communication (SJMC) and director of our digital language skills program, is a public research university with approximately 50,000 students. The university usually clocks in first or second of all institutions in the United States for graduating Hispanic students with undergraduate and graduate degrees (the 2014 Hispanic Outlook magazine ranks FIU as number two). Our school has 2,000 students, 73 percent of whom are Hispanic, largely from the Caribbean, Central and South America, and 12 percent African-American.

We are not alone in our experience as a communication school grappling with the quality of student writing in general, as well as English as a Second Language (ESL) issues — schools in Texas, Arizona, California and New York have long dealt with the challenges posed by bilingualism. But Miami has perhaps the most complex concentration and mix of Hispanics in the United States.

If the projected 2022 U.S. Census estimates that 26 percent of all teenagers and 23 percent of those between 18 to 34 will be Hispanic hold true, then cities across the United States will look increasingly like Miami, and more schools can learn from our experience.

Almost two decades ago, before our school started digitizing the journalism, broadcasting, public relations and advertising curriculum, we started developing an extensive language skills program based around a digital grammar teaching and testing system meant to strengthen students’ language and writing skills and reduce the ESL issues that came with being a Miami-based institution.

Kevin Hall, a former Miami Herald editor, pioneered this seminal digital program in the mid-1990s. It was a combination of essays and tutorials on writing and quizzes that referenced literature and popular culture to illustrate that all writing and spoken language — from movie dialogue to song lyrics — contained the basic building blocks of grammar and punctuation.

This digital language skills program provided access to the fundamentals of grammar and writing to our students, the majority of whom came from Miami’s Cuban-American population. For many, it was the first time they reviewed English language skills since elementary school — or had arrived in the Miami area.

Instituted in a lock-step approach, the approach tested students before each writing course in their discipline. Each class had a 100-question multiple-choice, self-scoring entrance exam with a passing score five points higher than the previous class as a prerequisite. This take-no-prisoners approach constantly reinforced basic language skills through repetition, with the ultimate goal of helping students untangle Proustian-length Spanglish sentences and develop into capable writers.

The passing score for the introductory writing course, was 65, a D, and roughly 45 percent of the students passed the exam. As a journalist teaching writing for the first time, I was completely overwhelmed trying to teach narrative style writing to students who had great difficulty organizing words into basic declarative sentences in English.

A question arose: Should a professor have to teach the fundamentals of grammar in a journalism and mass communication school?

We faced protestations from students, their parents, even some faculty that “The Dreaded Grammar Test,” as it became known, was more punitive than helpful. The lockstep approach also often caused a bottleneck as students couldn’t keep up with the five-point increases in passing scores, with many forced into retesting (students had four chances to pass the exam) and retaking the writing and grammar course. Despite all this, improvements in the use of language and writing were measurable and often dramatic.

Between 2001 and 2004, recessionary economies and political instability throughout Central and South America drove whole families into South Florida for political asylum the way Cubans had come two decades earlier. The sudden surge of populations from Venezuela, Colombia, Nicaragua and Brazil brought students with widely different levels of English proficiency.

Now the director of our language skills program, I knew we not only had to change to a basic English grammar system and remove cultural bias through reference to Western literature and popular culture, but also start abandoning radical remediation and remove the lock-step approach.

We had to find a way to raise the bar for students and thereby relieve an understaffed faculty, who, like me, spent excessive hours correcting ESL issues while teaching journalism, public relations and advertising. At the same time, we had to figure out how to not abandon what amounted to about 55 percent of the students who failed to pass the language skills entrance exam.

We experimented briefly with non-digital copy editing exams in which students were challenged to read sentences and identify parts of speech and correct grammar, punctuation and spelling errors. But the majority of the students found it too difficult to score higher than 40 percent on the test. I decided we would have to return to the 100-multiple choice test in which students could choose answers from options in a language many were still struggling with.

A grant from the Ethics and Excellence in Journalism Foundation enabled me to gather a team of the school’s top writing and language skills professors and IT professionals, and produce a new, leaner digital program that eliminated lengthy tutorials, focused on the question-and-answer approach, frequently infusing grammar rules with lighthearted or offbeat explanations as a way of making the digital site more user-friendly.

I also believed it was time for the school to raise our entrance score requirement. The 65 passing grade had kept us in the remediation business.

Raising Standards and Impact on Enrollments

Cautiously, we raised the entrance score first from 65 to 68, and then to 70. More, we added a basic writing sample to detect whether students could write clear declarative English sentences.

The percentage of students who passed the exam when we raised the score to 68 plunged from 59 percent to 43 percent. The rate continued to tumble when we raised it to 70. Only 36 percent passed. Enrollments fell from 200 to 160 students in our introductory writing course.

It took several semesters for students to reach the higher bar and score 70 on the exam, and for enrollments to return to previous levels.

In addition, recognizing that language skills require reinforcement and that students could also benefit from in-class training, we developed and conducted Grammar Slammers, three-hour boot camps, several times a semester, and created a three-credit Grammar Workshop refresher course available in person or online.

In summer 2013, we again raised our standards. Where before we gave students multiple chances to score 70, students now have only one shot at passing the exam before being required to take the Grammar Workshop course. The tougher measures have motivated students to take the Grammar Workshop before taking the test for the first time, yielding a higher pass rate, increasing from 48 percent to 62 percent over four semesters. Additionally, I also continue to see vast improvements in the quality of student writing compared to the essays I graded when I first started teaching.

“The test freaks students out, but the truth is I had minimal grammar training prior to the program and the test, and I needed to clean up my grammar,” says Jessica Meszaros, an SJMC graduate interning at the South Florida Sun-Sentinel. “I don’t always remember the grammar terms, but the program was so valuable to me in forming sentences and developing a rhythm in my writing.

“The test does something else: You have to really make up your mind whether you want to improve your writing skills enough to be a journalist, so it kind of weeds out those students who aren’t serious.”

Silvana Ordonez, an SJMC graduate now a producer at CNBC in New York, writes in an email: “That semester of studying and stressing was a good, solid foundation. All the studying taught me grammar, but it didn’t teach me to tolerate others … with bad grammar. Now, I can’t stand people who want to jog or run further or keep things between you and I. Kills me.”

Grammar for a Multicultural Future

Teaching language skills as part of writing programs has long been a conversation in communication schools regardless of whether they’re dealing with bilingual issues. But the changing demographics will make it less of a choice and more a necessity — whether programs use self-tutoring digital models like ours (http://journalism.fiu.edu/#!/Language_Skills) or diagram sentences on a chalkboard the old-fashioned way. Here are a few things to remember if you develop a program:

Allan Richards, associate dean and associate professor, oversees the SJMC’s language skills program. Richards developed the SJMC’s current computerized language skills testing program with a grant from the Ethics and Excellence in Journalism Foundation and the SJMC’s Writing Center with a grant from the Scripps Howard Foundation. Richards began his career as a music journalist in New York and later branched out to cover the environment and health.