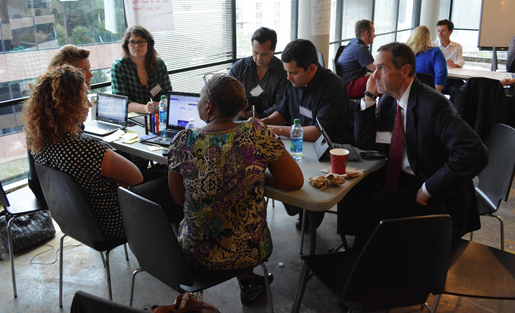 Last October nine media startups came together for a full-day hands-on workshop put on by MediaShift called Collab/Space Atlanta. Each presented lightning-style and then worked with media innovators from across the country to get through challenges and brainstorm ways to work together. Though the projects were all at different stages, there were some common hurdles among them: having clear goals, identifying target audiences and finding funding.

We told you that we’d keep track of how these projects evolved over the next year, and oh, what a difference eight months makes.

Here are some highlights form each startup, all of them still operating:

AdGlue, the system that allows advertisers the ability to place their own ads next to content they like, recently launched on 21st Century Media publications in Philadelphia, according to their website.

“In Philadelphia we are averaging 12,690 additional articles per week. We are indexing an enormous and powerful “long tail.” These are articles where influential audience is landing and that’s the place advertisers should want to be,” co-founder Ben Ilfeld wrote in a recent blog post.

“Carolina Public Press’s award-winning staff will be visiting all 18 westernmost counties of North Carolina in the coming months to host a meetup with readers, donors, volunteers and content-sharing partners during a series of free, public community meetings called The News Exchange,” director and editor Angie Newsome wrote on their website.

One of the challenges that Carolina Public Press expressed at Collab/Space Atlanta was the difficulty of reaching their large, sparsely populated area. They wanted to find out what was most important to the people they were trying to serve. The News Exchange addresses this challenge directly.

“It was one of the things we were hoping to get off the ground last fall. It turned out that we almost won the Health News challenge but came up a bit short, so we asked them for a Prototype Fund Grant and won! We’re live with our crowdsourcing health-prices event in California, with our two stellar partners – KQED public radio and KPCC public radio,” founder and CEO Jeanne Pinder told us via email.

One of Clear Health Costs’ challenges last fall was expanding to cities outside of New York. With some excellent backing, they are doing exactly that.

FlashIssue, the Gmail email newsletter for personal branding, has launched a new Gmail template that provides new features, giving the product more versatility. According to their website, users will be able to “customize what images, texts and links you use to better fit the audience of your newsletters.”

Groundsource, the system for communicating with groups of people through SMS, is still in beta. According to their Twitter profile, they are “seeking inspired users for closed beta.”

One of the major issues that Groundsource faced in October was the challenge of building a network for the service they provide. Through intense beta testing, Groundsource can better understand who their user is and why – creating a better quality product.

“The Public Press will use the INNovation grant to launch a street mobilization pilot program that will employ newspaper hawkers and canvassers as part of a larger initiative to improve the visibility of the organization, expand its audience and increase membership donations,” publisher Lila LaHood wrote on their website.

The grant will be used to directly influence the Public Press’ challenge of growing members and influence in their community.

Plus, SF Public Press recently raised more than $21,000 on a Kickstarter campaign to fund “Pedal-Powered News,” hiring bike riders to deliver print papers around San Francisco. The campaign was also matched by a $10,000 grant from the Knight Foundation.

Meograph, the system that allows users to create rich multimedia with assets that are rights-approved, is currently working on launching an app, CEO Misha Leybovich told us via email.

“We are focused on continuing to build great technology that solves real problems for our clients working in TV/radio/print media. In some cases that means adding to our core SND Dashboard and Apps Management system and in other cases…building new, compatible products,” founder Kim Wilson told us via email.

Voices on the Record, which was essentially an idea last fall aimed at making it easy to store voice recordings of interviews, is now a website. Ana Maria Carrano, who presented the startup at Collab/Space Atlanta, is now a Knight Fellow at Stanford University. She worked with four others to make the project possible.

Ana Maria Carrano worked with four others to create voyz.es.

“There are more than 600 newsrooms managing and monetizing social content using SocialNewsDesk (and growing). It’s important to us to maintain strong customer service standards even as we continue to scale the business. With so many clients, this is certainly a major undertaking — but our team is up to the challenge,” said Wilson.

SocialNewsDesk isn’t alone. Clear Health Costs is also trying to figure out how to manage the same issue.

“We have two big new partnerships and a robust pilot — plus more interested partners. Now our challenge is scaling our business model,” Pinder said.

Growth is a good problem to have, but still something that needs to be managed.

At Collab/Space Atlanta, all nine startups said they struggled with finding funding. John C. Yates helped give some guidelines for funding at the end of our session. Since then, many of the groups have received grants that have allowed them to flourish.

“SND (SocialNewsDesk) is entirely bootstrapped up to this point. To accelerate our growth, we are in the process of raising a seed round of funding. We’ve had great interest from potential investors and are now working through the logistics of that,” Wilson said.

No matter the size of the project, challenges persist. But, as we heard form Yates last fall, funding makes everything a lot easier.

All of the startups we heard from said they would undoubtedly participate in another workshop. Each said they benefitted from the brainstorming and feedback.

Are you interested in participating in Collab/Space? The next workshop, Collab/Space New York, will focus on intrapreneurial innovation at media and tech companies. It takes place tomorrow, July 8, is sponsored by the Donald W. Reynolds Journalism Institute and is hosted by the Ford Foundation. You can still register here.

PBS MediaShift is also putting on Collab/Space Chicago on September 24, 2014, the day before the ONA14 conference. Sponsored by the John S. Knight Journalism Fellowships at Stanford and hosted by TechNexus, it will be an all-day, hands-on workshop focused on media innovation and spotlighting cutting-edge media startups –  in the Chicago area and beyond. You can register for that event here.

Plus, plans are in the works for Collab/Space DC in November, with a focus on civic hacking and data. More details to come!