Advice for Startups: Know Your Goals, Your Audience and Your Money 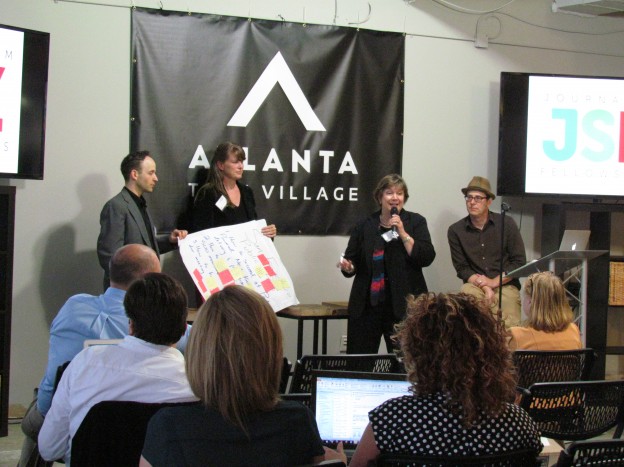 San Francisco Public Press and Carolina Public Press present solutions to the challenges that came from the breakout sessions at Collab/Space Atlanta.

Though they are all at different stages of development, the nine startups presenting at the Collab/Space Atlanta workshop Wednesday have a few main challenges in common: having clear goals, identifying their target audiences and knowing where the money is coming from.

Collab/Space was full-day hands-on workshop (put on by MediaShift) in which nine startups presented lightning-style and then worked with media innovators from across the country to get through challenges and brainstorm ways to work together.

"Dan Grech spelled it out best by saying every goal needs to be SMART -- specific, measurable, aggressive, yet achievable, relevant and time-bound."

The workshop was meant to create a safe environment for these startups to put all their cards on the table. Innovators were able to dissect their business model and suggest fixes on the spot. Here are a few takeaways.

The biggest issue for many of the nine startups was knowing what the core of their venture really was. This was apparent right off the bat during some the presentations. Many groups seemed to try to bite off more than they could chew, which made their business plans seem scattered.

Dan Grech spelled it out best by saying every goal needs to be SMART — specific, measurable, aggressive, yet achievable, relevant and time-bound. This allows startups to be realistic and center their message.

San Francisco Public Press, a print publication focusing on local public interest investigating reporting, was challenged with focusing their goals in preparation for a meeting with potential investors. Participants who brainstormed solutions with them advised that they to go back to their investigative stories that made a real impact in their local community and see why. From there they could establish successful goals and values.

Who are you really targeting and why? This was a hurdle for a lot of the groups. Many wondered who they should tailor their product toward. For Meograph, a company that allows users to create rich multimedia, the challenge was finding the type of community that would benefit most, whether it’s sports fans or people who like doing home improvement projects.

Groundsource also struggled with this. Their product allows groups to target a wide range of people through SMS. It seemed Groundsource was overwhelmed by the idea of identifying their audience because of the global potential of their product. Through the break-out groups, participants helped them looks at the issue more from the idea of who is addressing the users — newsrooms, NGOs, and researchers — and from there they found their audience.

This was a challenge for all nine of the startups, and John C. Yates’ 7 Practical Pointers helped give some guidelines for finding funding.

They are as follows:
1. Be the smartest person in the room
2. Protect the crown jewels
3. Be a star gazer
4. The customer is always right
5. Whistle while you work
6. There is no “I” in team
7. Follow the money

There were two key points that Yates presented: The first was to not waste your time trying to get money out of investors that don’t have it to spend. It’s important to remember to do your research first. Has this person ever invested in a company like yours before? No? Then keep moving. Use common sense.

The second key point was, your team is valuable. Scratch that, your team is everything. If you don’t pick the right people to grow your startup with, you won’t get off the ground. It’s always a collaborative effort and there needs to be enthusiasm. Like Yates pointed out, you need a good team for your product, but you also need a good team for investors. They want to see that there are super-charged people behind what they’re putting their money into. Bring investors into your work environment and let them get energized by your team.

Finding funding was a challenge for Carolina Public Press — an investigative journalism organization in Western North Carolina focused on public interest reporting. Audience members suggested that they hold events and offer training on how to gain access to public files to build revenue. Another suggestion was to partner with other local media to share content and get their name out in the community. The latter would require Carolina Public Press to consider if partnering with another media outlet was really in line with their goals.

One of the biggest takeaways from these nine startups is that not one area of the business can be considered without considering the whole. Goals affect audience, which in turn affects funding. And if you’re not careful, funding can affect goals.

See the day-of coverage with more information about each startup here.