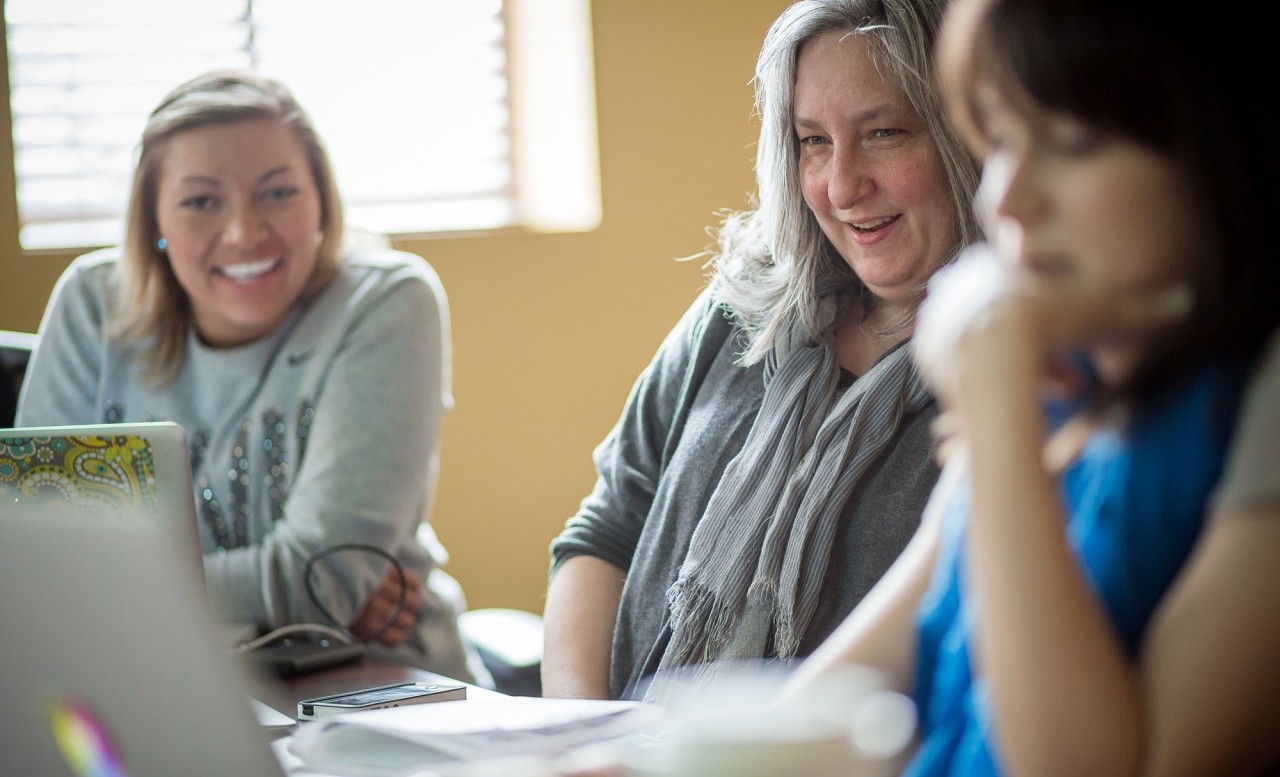 You have infinite resources, no obstacles, a talented startup staff and brilliant students: Now build an experimental venture from scratch. (With a caveat: You can’t replicate any existing models — you have to invent one.)

This was the challenge posed to West Virginia University P.I. Reed School of Journalism faculty in a brainstorming session led by Zach Seward, senior editor of Quartz, and Sarah Slobin, senior graphics editor of the Wall Street Journal and the school’s first Innovator-in-Residence (an experiment she narrates in Touch of Anarchy for EdShift).

Maryanne Reed, dean of the School of Journalism, challenged the faculty to abandon all preconceived notions of what school of journalism publications have been – including discarding the term “publication.”

Seward, who is one of the founding members of Quartz, launched in 2012 as an experimental venture (check out Qz’s inspired mission statement) for Atlantic Media Group, echoed this position.

“As you struggle with this idea of whether you are trying to create a publication, a website or what … It’s exactly the same problem we had at the start. We didn’t want to say we were doing a business ‘website.’ We didn’t know what word to use.”

This exercise is the School of Journalism’s first step to launching a digital news startup that will debut in its Media Innovation Center. Outfitted with a maker space, a hacker space and a device lab, the center will also feature a “digital storytelling hub.” The space is designed to support experimental journalism and serve as a sandbox for industry innovators-in-residence. Slobin and her student team launched a mobile-first reporting experiment, “The Drug Next Door,” which investigated student abuse of study aids, on April 28.

“This venture needs to be a living experiment in news production and distribution.  We are taking inspiration from start-ups like Quartz, Vox, and Syria Deeply,” Reed said. “But our mission has to be to iterate on these industry innovations, not to duplicate them.”

Zach Seward speaks with four teams made up of journalism and strategic communication faculty and program leaders as they confront the opportunities and challenges of a blank slate for a digital start-up. One of Quartz’ directives, he shared, was to “Be bold and creative.” Photo by David Smith.

Reed concedes this is a high mark to hit. Journalism education faces the same obstacles —and fears — that challenge the industry.

“Permission to fail is essential,” Reed said at the outset of the brainstorming session.

“Excellent journalism continues to serve as the backbone for everything we do,” she said. “But we need to do much more than that.”

The “more” includes a call to unite journalists, strategic communicators and technologists in an integrated effort, from start to finish.

“We can’t just declare ‘story is king’ and hope someone else will tend to device or audience or revenue or platform. We have to keep imagining new teams for new ventures that can do it all.”

Seward and Slobin echoed this mandate during the brainstorming session. Seward cautioned faculty to recognize that technologists are fellow storytellers whose language is code while Slobin urged faculty to keep distribution and audience-building in mind as part of the reporting process.

In the spirit of Quartz’s anatomy of “things,” here are four tips that came out of the brainstorming session at WVU for envisioning a new digital news venture from scratch.

Seward orients faculty to the rationale behind the atomization of story at the outset of the brainstorming session in his aptly titled presentation “Things.” Photo by David Smith.

1) Let Outliers Lead.
The school’s innovator-in-residence program is designed to connect faculty and students with outliers who are leading experimental change in their own newsrooms. Engaging industry upstarts connects participants to the behind-the-scenes processes — and trials — of experiments like Quartz. This engagement with external risk takers helps to head off nostalgia for more familiar journalism models — and it sets a tough tone for innovation culture.

When students expressed uncertainty to Slobin about how to proceed in their experimental class, she advised, “If you see failure on the horizon, run toward it!”  And when faculty were asked to envision a start-up “dream team” for their new venture, they asked Seward,  “What did Quartz’s start-up staff look like?”  “Two people,” he replied with a shrug. In less than two years, Quartz has grown from an imaginative “minimum viable product” born of a clean slate to an influential news enterprise with an audience of 4.7 million per month.

The WVU journalism school cites Quartz’ 2012 launch as an influence on the school’s commitment to a digital-first curriculum and to its development of device-based storytelling models, including mobile-first and experiments in wearable technology. Quartz’s niche-centric audience-building model, like other recent startups, such as Syria Deeply, or FiveThiryEight, conveys a global sensibility through precisely articulated “obsessions.” This has paved the way for the School of Journalism to break away from a local coverage model and to envision a hybrid approach that can tackle globally resonant issues (such as politics, energy, health disparities, environment, a transitioning economy) through the sharply defined prism of West Virginia’s own communities.

2) Don’t Be a Prisoner of Experience.
Challenging the status quo also means turning a critical eye to years of practice and accumulated expertise. And this can feel like heresy to some of the most accomplished members of a team. As we learned in the New York Times leaked innovation report, something as self-evident as the decreasing value of “A-1” in the digital ecosystem was a bitter realization for many.

Asking impassioned journalism educators to question the processes, values and rules they hold most dear isn’t easy, but it helps illuminate their perceived obstacles to innovation. For example, in our program, we challenge colleagues to stop relegating technology to the “just-a-tool” bin, and to fully integrate it into teaching as a cultural, economic and narrative force.

Journalism educators, like their counterparts in industry, represent a unique breed of practical thinkers who are not necessarily prone to flights of fancy. One way to overcome the hesitancy for describing something new, is to say what it isn’t, as was the case with Quartz at its inception.

Seward shared the simple rationale behind how Quartz got its name in the early days of envisioning the venture.

“We could have picked any random noun,” Seward said. “We needed a name that conveyed what we weren’t.”

The landscape of competitors in business news featured well-established brands with literal names, he explained: the Wall Street Journal, Business Week, the Financial Times, and The Economist. Seward said that while the Quartz start-up team envied these strongholds of business journalism, they wanted to clearly communicate, “We’re not trying to do what they’re doing. We’re trying to do something different.”

3) Go where your audience is and where they will be.
Experiments in revenue generation and audience-building are critical to a digital start-up. The oft-cited “if the news is important enough, it will find me,” has served as gospel for the past five years for connecting with readers in their natural habitat, namely social media. This tenet has since evolved to become a device-centric mantra with the current emphasis on achieving frictionless mobile consumption.

One of Quartz’s prime directives was to be a mobile- and tablet-first product with a social distribution strategy, Seward said.

Producing for this challenge, he notes, as opposed to creating a cover-to cover-experience, gives rise to a more fragmented reading experience, and Quartz’ stories are designed as discrete bits of content — “things” ­— that travel well in mobile, social feeds.

While these are essential, relevant strategies-of-the-moment, it’s not too soon to build a digital publication for future audience behaviors. And while we’re at it, educating students for jobs that currently don’t exist. This means prioritizing experiments in audience-building and storytelling through anticipated forms, including augmented reality, wearable tech, gesture and sensor devices, even neurotech and other emerging technologies.

4) Have a noble purpose.
During the brainstorming session, faculty were pleased to discover that some of the most popular “things” at Quartz are in-depth reporting pieces.

In envisioning Quartz, Seward said, “We wanted it to be foremost a serious publication, not a cynical play for page views. We tried to find a way for serious, quality journalism to thrive online.”

Reed concurred and reaffirmed that the school’s new venture must be first-and-foremost a journalistic venture with a “noble purpose.”

“There is no reason to invest our time, resources and human capital in an initiative that isn’t advancing the cause of journalism,” Reed said.

“Our students need to do a deep-dive into important stories that matter to this region, while also experimenting with how to build audience and revenue through a digital-first, highly social, and device-driven approach.”

Dana Coester is an Assistant Professor at the PI Reed School of Journalism, West Virginia University, and also serves as creative director for the school’s media innovation center. Coester’s work focuses on community media and the economic development potential in technology disruption. Her research examines the future of storytelling with special interests in mobile, augmented reality and wearable technology at the intersection of narrative and neuroscience. Coester earned her master’s degree in Journalism from the University of Missouri-Columbia in 1993.