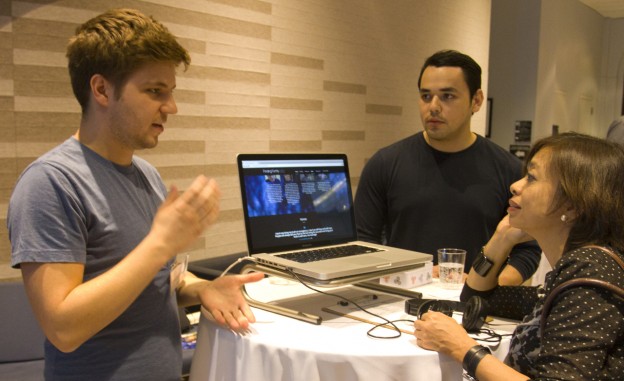 As data journalists and computational journalism become key elements in newsrooms, Columbia University’s Tow Center for Digital Journalism has been tracking the trend and examining its impact on post-industrial journalism. Columbia students have been practicing data-driven journalism as part of their coursework since 2012. The Tow Center’s annual Innovation Showcase, a public two-day event in May, highlights students’ transformation of their efforts into compelling and powerful digital journalism projects.

The Innovation Showcase provides a unique opportunity to see and explore students’ inventive original work, but it also allows the audience to interact with the makers of each project to learn the thinking behind their work.

“We want journalists here to think in a more radical way about breaking out of the set formats of journalism which are being superseded by digital practice." - Emily Bell

The third installment of the Tow Center’s Innovation Showcase, co-sponsored with the David and Helen Gurley Brown Institute for Media Innovation at Columbia’s journalism school, is reflective of how far journalists have come in embracing data journalism to cover a broad range of stories. It also shows the momentum computational journalism has gained in newsrooms large and small in the last decade.

“We want journalists here to think in a more radical way about breaking out of the set formats of journalism which are being superseded by digital practice,” said Tow Center director Emily Bell.

This year’s Innovation Showcase featured projects and processes from across the spectrum of digital journalism: from data scraping to document-transcription to photography to FOIA requests. Projects included intimate video narratives as well as news-analysis applications and data-driven websites that have been created by participants from across the school’s media specialties and research centers.

Students show off digital journalism projects at the Innovation Showcase, hosted by the Tow Center for Digital Journalism. Photo by Rebecca Castillo

While most of the 16 projects featured collaboration among disciplines, some, like IRIS, came solely from one department.

Computer science students Sahil Ansari, Shensi Ding, Robert Kuykendall and Bo Xu have built IRIS, a web-based app they hope will help journalists. IRIS is a free web application that provides a map of global news of positive or negative sentiment. Users can search for top recent news by country or word phrases and visualize its geopolitical sentiment.

Coincidentally, many of this year’s projects complement current research topics being explored at the Tow Center, including metrics, data journalism, single-subject websites and sensor journalism.

Audience members had the opportunity to interact with makers of each project and learn more about the process behind each work. Photo by Rebecca Castillo.

Journalism students Olivia Feld, Robert Hackett and Julien Gathelier created and curate Drones At Home, a blog that covers the latest in drone news — from videos taken in Alaskan glaciers and erupting volcanoes in the South Pacific to recent dogfights between hobbyists, businesses and the Federal Aviation Administration. The blog also features the series #meandmydrone which showcases drone pilots and their drones.

Demonstrating the uptick in niche news, two groups presented single-subject websites. Recent Columbia journalism grads Shiwani Neupane and Isheta Salgaocar, along with photographer and documentary filmmaker Roshan Ghimire, run Story South Asia, which seeks to fill the gap in in-depth analysis of that region. Similarly, The 545, is the first dedicated online news platform on the 2014 general elections in India. The 545 features sharp 300- to 400-word pieces with data-driven graphics and visuals, tailored for online consumption.

Lauren Mack is a research associate at the Tow Center and a freelance journalist. Learn more about the Tow Center by visiting www.towcenter.org or on Twitter @TowCenter.