The Pros and Cons of 6 Key Social Media Tools 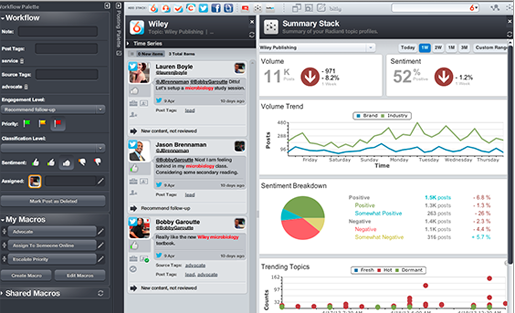 Radian6 aims to give you insight into social media conversations.

Editor’s note: This is the third post in a series highlighting research and possible new directions for Knight Lab’s Twitter search tool, twXplorer.

"For journalists [social media] platforms can make for invaluable resources -- that is, if they know how to use them."

Social media platforms such as Facebook and Twitter are bursting with information thanks to people and organizations the world over ready and willing to share. For journalists, these platforms can make for invaluable resources — that is, if they know how to use them. In my work researching possible future directions for twXplorer, I came across countless social media tools. But here are some of the key products journalists use to get the most out of the social web and the pros and cons of each.

Topsy is one of the only services able to search through every tweet ever posted, a result of the company’s “firehose” access. This, along with a wealth of search filters, makes their service an outstanding resource if you need to find tweets from a specific time or on a specific topic. Their “influencer” highlight is a great resource for those looking to get familiar with the biggest voices on their beat, or for social media managers who want to get people with a lot of social reach to spread the word about a story. Unfortunately, all that data can be hard to search through, and it’s difficult to get much graphical analyses in the free version. If you want analysis, you’ll have to pay up or be happy with a line chart of the number of tweets related to a term in the past 30 days. It’s also not the best way to get an overview of a conversation, twXplorer’s histograms are much better if you’re just trying to see the key hashtags and terms related to your search.

They said: “Topsy is my primary tool for gauging sentiment around a Twitter hashtag. Still, getting down to an individual tweet can be painful.” –Anika Gupta, CNN-IBN, product manager for CJ online.

For those looking to get a quick understanding of what’s going on on Twitter right now, or in the past week, Tame.It is a great option. There’s no hard limit on the number of tweets you’ll come across, and results are updated live as more tweets pour in — meaning you can leave it open in the background while it continues to analyze what’s going on with a term. However, if you’re looking to find a specific tweet, learn about something that isn’t very popular or find information more than seven days old you’re probably going to be out of luck here. TwXplorer can be more useful for less popular topics, since it calls the last 500 tweets which include the searched term, even if they took place outside of the last week.

They said: “It’s sort of like Twitter’s trending hashtag section, but personalized to the people you follow.” –Carmel Deamicis of Pando.com

If you’re working as a social media manager, odds are you’re trying to drive clicks to to your stories by interacting with key influencers, framing things just right for your audience and sharing conversations your audience might be interested in. Tools such as Radian6 and Hootsuite’s analytics can make this a lot easier by giving context to who’s talking and what they’re saying. They’re also useful for creating quick graphical summaries and sharing information with your team to make sure they’re best serving the audience, and understanding what is being said about their stories.

Marketers use these tools to make sales over social media, spot changes in sentiment around their products, pinpoint where and why there’s a problem, and react before the press in a technique called “intercept marketing.” Utilizing the speed of social could have huge implications for journalists trying to get ahead of the curve.

WeFollow shows users the most prominent voices speaking on a given topic.

WeFollow is a service designed to recognize the most prominent voices speaking on a given topic. It uses an algorithm that takes into account not just how many people are following an account, but also how prominent those voices are as related to a given topic. The result is a system which recognizes not only well-established voices, but also up and comers. Unfortunately, this service requires accounts to sign up, or tweet hashtags of their interests at WeFollow to be included in the rankings, meaning thousands of voices aren’t taken into account in the rankings.

They said: “Several big names have voluntarily joined the directory including companies such as Google and celebrities like Ashton Kutcher.” –Ben Parr of Mashable.com

Socialmention tracks sentiment across a variety of social networks.

Social Mention might be the best free resource for journalists looking to toy with how they can use sentiment and other novel measures in their reporting. This site allows users to search for any term; in return they’re given links to mentions on a wide variety of blogs and microblogs, and some curious stats called “strength,” “passion,” “reach,” and “sentiment” designed to help you understand the larger conversation going on at that instant. The drawback is that searches don’t return much in the way of results, usually coming back with less than 500 mentions for any term.

Ah, the old standby, Twitter’s advanced search still has a big place in the search and analysis landscape. In my research I never found a better tool for finding tweets by location or by sentiment. If you want to find individual positive tweets about, say, Lyft near you right now, this is the tool to do it. The same rules as regular Twitter search apply though, and this isn’t necessarily going to tell you the most important people talking about Obama or the key trends related to the NBA, as Topsy or twXplorer might, if you you’re looking for a more holistic view of the service.

The social search landscape is filled with great tools — Topsy is great for finding older tweets and key influencers, Radian6 and others are powerful marketing forces, and even Twitter’s advanced search is useful everyday. But even with so many competitors it’s clear that twXplorer has a niche. There’s no better free tool for understanding the conversation around an individual search quickly, thanks to the way the search functions and the way the results are graphically displayed. Tame.it comes closest, and it certainly has its strong points with its ability to call up thousands of tweets, but if you’re interested in less popular topics or in easy, visual digestion, twXplorer is the best option. That’s not to say twXplorer is perfect, and I’m hopefully we can make twXplorer even better at filling its niche with future iterations.

Neil Holt leads a team of students at Northwestern’s Medill School of Journalism to design and develop an iPad app to showcase Medill’s best work. The app is aimed at future students and alumni, is easily monetized and was produced with a strong focus on creating a clean, easy and cutting-edge experience for the user. We believe that design will be more important than ever for the future of journalism, and that the leading journalism school should be a leader in the future of interactive storytelling. You can follow him on Twitter at @NeilTHolt.