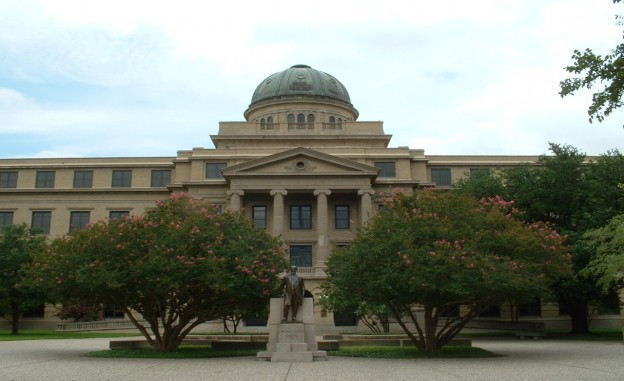 Texas A&M University enrolls more than 53,000 students on its College Station campus, but hasn't had a journalism major for a decade. Photo by Stephanie on Flickr and used here with Creative Commons license.

A little over 10 years ago, journalism students at Texas A&M learned their major was being cut because of a lack of funding. Budget constraints loomed over the department, and they didn’t have the resources to keep up the program. The news came as a shock to many. Although the institution is widely known for its science and engineering programs, Texas A&M, with more than 53,000 students, should surely be raising up future generations of storytellers through a competitive major, according to students and faculty who protested the shutdown of the major.

But this fall, the journalism major is coming back to the flagship university after a long bout as a “minor” offering, thanks to the persistence of professors and a fresh perspective on preparing students for careers in communication during the digital age.

"If you don’t know how to work within a database or how to find reliable sources and digital information, it doesn’t do a lot of good to be able to operate a drone." - Dale Rice

After the then-dean of A&M’s College of Liberal Arts decided he couldn’t sustain the operation any longer, the journalism “department,” as it was, disbanded. The department became a “program” under the Department of Communication umbrella, only available to students as an 18-credit minor. During the last decade, though, the program has done its best to keep aspiring young journalists engaged through its academic coursework and media internship requirement on a limited budget, while trying to adapt to the ever-changing news landscape. To call it a “challenge” would be a vast understatement, but as Director of Journalism Studies Dale Rice told me, resurrecting the journalism major is an exciting new start for the school itself.

BRINGING THE MAJOR BACK FROM THE DEAD

Beginning in August 2014, Texas A&M journalism majors will pursue what is being called a “Liberal Arts Degree in Journalism” through the university’s College of Liberal Arts. As part of the program, students will be required to earn two minors – one within Liberal Arts and one outside the college, in addition to their comprehensive journalism education.

“We looked at the avenues that were available to us that made sense for where journalism is headed in the 21st century, so we decided that we would bring journalism back to the College of Liberal Arts through the university studies program,” Rice said.

Though the Journalism Studies program had been adding more digitally focused courses in recent years, the re-imagined major is a substantial departure from what was being taught in the old major, Rice said.

“In some ways, we started from scratch because we are not replicating in any way, shape or form the old journalism program. It’s very much a new journalism program in a new format. It restores the journalism major, but it has allowed us to do it in such a way that meets the requirements of the way journalism is practiced today,” he said.

“It’s a modern-oriented program that is reflective of the way journalism is being practiced today, but for students who want a broad educational background,” Rice said.

But despite all the buzz around the budding program, the major will stay small, at least for a little while, with a cap of 100 students total and only 25 freshmen accepted each year.

A TRADITIONAL, NOT “DIGITAL-FIRST” PROGRAM

A&M is known for its traditions, and though the journalism major focuses some on the digital realm, the concepts taught will remain traditional in nature. In other words, you won’t see students enrolling in any Google Glass classes or drone journalism experimentation courses. When asked how the department would help prepare students for the digital world and the technology-laden direction journalism is inevitably headed, Rice said, “I think that’s making a big assumption.”

“Look at what is happening in the journalism industry. I’ll use Texas as an example: weekly and small daily newspapers are doing very well. I know two weeklies that hired within the past month all because we had students who were finalists for those jobs,” Rice said.  “I know that right now they are looking for people who can report and write and who have an understanding of the additional sorts of things they can do for the web.”

It’s not that he doesn’t see value in teaching journalism students how to use new digital tools for reporting. He just thinks mastering the foundations of journalism are paramount.

“For the most part, the kind of skills you need to be a web-based journalist, you first need to be a journalist – that ability to collect information, sift through it, determine what’s important and put it in an understandable way. Only at the end might that format be print or digital,” he said.

Kathleen McElroy, who graduated from Texas A&M with a broadcast journalism degree in 1981, is one of the most decorated journalists to have ever gone through the program. Currently a Ph.D student at the University of Texas at Austin, McElroy was an editor at the New York Times from 1991 to 2011, and her father, George McElroy, was a pioneering African-American journalist.

She said it’s important to remember that for nearly a century, “students entered print journalism programs already knowing how to read, write, listen and ask questions — yet schools spent four years teaching them how to report and write in a particular ‘professional’ fashion … I would agree that executing the basic tenets of reporting and writing (which includes thinking critically) are crucial tools for the aspiring journalist.”

But perhaps the breadth of journalistic writing curriculum should be widened for the times.

“Let’s say that ‘writing’ can be a blanket term for the actual production of news content — writing for the web, mobile, and social media, television and print, as well as writing code that produces journalism and actual web production, handling audio and video and producing graphics for a variety of media,” McElroy said.

Dale Rice spent a 35-year career in journalism, including a stint as the Austin American-Stateman’s restaurant critic.

Cindy Royal, associate professor in the School of Journalism and Mass Communication at Texas State University, has documented extensively her thoughts on the future of J-school education. She said journalism educators should teach students an “understanding of the scale and economics that digital introduces.”

“Students need to graduate with an understanding of the role of user engagement and interaction in a mobile and data-driven environment,” she said. “They need to have experience with a range of storytelling techniques that include visual and interactive elements.”

But Rice said there’s a danger in training young people too much on the means by which they’re reporting, rather than the intricacies of reporting itself: gathering necessary and accurate facts, talking to the right people and doing it ethically.

“If you assume that the means of communicating becomes so important that you concentrate on the means and the way to operate those means, I think you may end up doing journalism students a disservice in the long run,” Rice told me. “If you don’t know how to work within a database or how to find reliable sources and digital information, it doesn’t do a lot of good to be able to operate a drone somewhere with a camera onboard or Google glasses or other kinds of cutting-edge technology.”

Royal says classes don’t need to be constructed solely around Glass, the use of drones or a particular news app to be effective.

“[Digital curriculum] should mean being curious about the role of new technology and encouraging students to experiment with and explore their possibilities,” she said. “While I applaud the efforts of Texas A&M in developing a program that is strong on critical thinking and liberal arts, I don’t feel that this approach needs to preclude teaching those elements in a digital context. I think they have a unique opportunity in starting a new program to introduce some more progressive elements.”

Getting an Ethical Grounding

Most students are more comfortable with social media and digital tools than we give them credit for when they show up to Journalism 101, Rice told me.

“The typical 18-, 19-, 20-year-old person coming into a basic journalism class is so incredibly familiar with various types of social media, you don’t have to literally teach them how to use it,” Rice said. “What you do is talk to them: ‘How as a journalist would you use this?’ ‘What is appropriate for various types of communication?’ Digital is not one single means of communication.”

It’s more important that journalism students are ingrained with a good ethical background and the ability to pursue proper verification processes when using content from the web or crowd-sourced material, he said.

“That is something that we teach throughout our journalism classes now.”

Through her experience at Texas State and as a Stanford Knight Fellow, Royal sees three main types of job opportunities for students in the digital age: newsroom jobs heavy on digital skills like data interpretation, roles within tech companies like Google or Facebook, and entrepreneurial positions at media startups. These are the genres of jobs J-majors should prepare students for, she says.

“Academic institutions should embrace the startup mentality and experiment with new models in developing media curriculum. This could include new types of courses, faculty who can introduce new concepts, non-traditional formats (like shorter workshops or online and hybrid offerings) and experiential projects that emphasize digital approaches,” she said. “There’s more work to be done across our discipline if we want to truly embrace the potential – and address the challenges — that digital has to offer in the ways that we tell stories that support the needs and interests of our communities.

As for Rice, he has received countless emails and phone calls from students with a newfound interest in attending A&M, now that the major is returning. “It will get more and more competitive,” he said.

8 responses to “Texas A&M Resurrects Journalism Major, But Focuses on Tradition Over Digital”