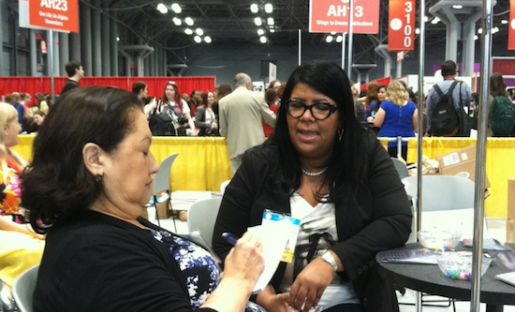 I don’t know when or why I started doing it, but every time I go to a conference I almost always do a minority report and grade the diversity of the attendants that the conference brings in my head. Perhaps it’s because I’m not just a woman, but a woman of color, usually a minority group at most publishing conferences I attend or speak at.

So, it’s no surprise that Book Expo America, the publishing industry’s largest conference, has come under fire from PBS host Tavis Smiley for the lack of diversity in the industry.

"Hopefully, when my daughter grows up the odds and ratios will be a little better. I am convinced though that the balance will come from the rise of indie/self-publishing."

During his panel, Smiley told attendants that the “publishing industry should work a little harder, dig a little deeper to help citizens of color get their stories told.”

Smiley’s comments hit home. I grew up in a Pakistani-American home in Queens and New Jersey reading stories that focused on blond, blue-eyed children, which left me with a sense of not belonging and disconnected from my peers.

Living in a White-Washed World

A lot of women like myself — dark-skinned, South Asian-American women — were brought up on the idea that fair skin always triumphs over darker skin. We’re conditioned to think that our Instagram, Facebook and Twitter photos need to “lighten up.” Every day lovely dark-skinned women are Photoshopped to look lighter, because they’re conceived to be more beautiful that way. The light is better idealogy always creeps into the books we read, the toys we let our girls play with, and other parts of lives.

Ever since the birth of my daughter last fall I’ve become more acute to the fact that we live in a whitewashed world, and I don’t want her to go through the same experiences that I did as a child. I became more conscious about buying books that tell stories with characters from varying backgrounds. It’s hard to come by these books from traditional publishers since less than 6 percent of books published in 2012 had diverse characters. You have to look really really really hard or resort to buying books that have talking animals.

I perused and browsed the booths and tables in search of authors and books that had characters and “real people” that represented the diversity of NYC or America. I was thrilled that BookCon had at least ONE #WeNeedDiverseBooks panel. I connected with the lovely Aisha Saeed, who spearheaded the Twitter campaign, and has a book about a young Pakistani American girl titled “Written in the Stars.”

AuthorHub an Exception to the Rule

I was surprised that the most diverse section at Book Expo America was the UpublishU AuthorHub which I’d say had over 50 percent diversity rating. I reconnected with the fabulous CJ Lyons, Orna Ross of Alli, Lara Nance, and HM Ward plus a rainbow of attendees who I was delighted to discover had wonderful books out.

I made a list of some of the fabulous authors:

Were the authors curated by publishers? Nope. They were the indie authors of BookCon/Book Expo America who had decided their own publishing fates for themselves.

It’s no surprise that the section which had the most diversity was where indie and self-published authors hung out. They didn’t have to go through self-selected publishing agents and the usual whitewashed gatekeepers to get out a book. Indie authors are growing in popularity among younger readers too, as Orna Ross mused about in a blog post.

I was largely disappointed by the general diversity of Book Expo America and BookCon, but the AuthorHub gave me hope. Hopefully, when my daughter grows up the odds and ratios will be a little better. I am convinced though that the balance will come from the rise of indie/self-publishing. Until then, I’ll leave you with a list from NPR: a Diverse Summer Reading List for Kids.