Newsrooms School Teachers on What Students Should Learn 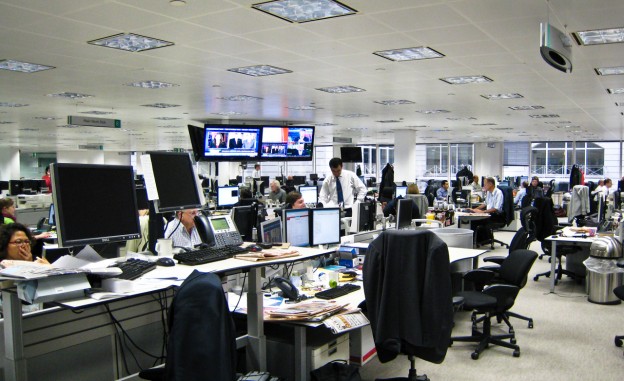 Journalism changes at a rapid speed, and universities struggle to keep pace. The system for updating curricula is often so bureaucracy-laden that by the time a new journalism tool or skill makes it into the classroom, the next big thing has already been trending on Twitter for months.

In an effort to bridge this gap, the International Center for Journalists is placing journalism professors from universities with large minority student populations back in the newsroom to help them build their digital journalism skills.

"You have to be good at writing, coding, video, photo -- but you still have to be an expert in one of those." -Corrine Chin

Five educators are spending the summer at top news outlets — the Los Angeles Times, CNBC, USA Today, the Wall Street Journal and Washington Post — to learn the latest skills needed for their students to thrive after graduation.

In preparation for their “internships,” the teachers chatted with professional journalists, as well as recent grads, to find out what’s missing from journalism education. They honed in on a few key areas that need nourishing in the classroom.

As the definition of journalism expands, it’s easy to think you need to be expert at photo, video, text, coding and more to make it. University programs push students to learn a range of skills and to be as versatile as possible, but that may leave grads without a marketable specialization.

Corrine Chin, a graduate of Northwestern University’s Medill School of Journalism, said the pressure persists in school to know how to do everything, causing many of her peers to graduate without a clear focus.

“They knew the basics of how to do everything but they didn’t get far enough into any one of those mediums to really know what they wanted to pursue,” she said. “You have to be good at writing, coding, video, photo, but you still have to be an expert in one of those in order to market yourself to get a job that you like doing.”

Whether you’re specializing by medium or topic, mastering a niche can help you stand out.

“Being this great generalist is not as effective anymore,” said Beryl Love, editor of the USA Today Network National News Desk. “From a local news organization standpoint, there’s been a big shift in focusing on issues that matter most to that community and letting other sources provide the commodity information. So a lot of people coming in, especially from J-schools, they have no topic area of expertise, and that’s what a lot of newsrooms are looking for right now.”

“With all the bells and whistles [students are] expected to learn these days, I don’t want them to forget to focus on the core of what journalism is,” said Tracy Boucher, director of news development at the Los Angeles Times. “I’m finding a lot of these students who want to be reporters forget to learn how to write, do the basic reporting and get the ethics down.”

Now that long-form, multimedia-packed narratives are proliferating, it’s vital to put storytelling first to take full advantage of the format. “It requires a storyboarding approach to conveying the information in the best way possible,” said Love, who hasn’t found many new hires with that skill. “The technology leapt beyond where we are as storytellers.”

Don’t wear your rose-colored glasses to graduation. Be prepared to work your way up if you want to be at a large news organization.

“[Students] walk in and think they’re going to become a star,” said program fellow Jerry Bembry, assistant professor at Morgan State University. “But they don’t know they have to go into small markets [for a few years] to get to that level.”

This comes from a lack of understanding of what the market sizes mean, said fellow B. Da’Vida Plummer, assistant professor at Hampton University. “They don’t understand the national platform versus a local station. You have to sort of break [their expectations].”

Joshua Hatch, senior editor at The Chronicle of Higher Education and adjunct instructor at American University, said going to a smaller market at first isn’t “a reality check; it’s actually a better thing for you,” since as a journalist you will be able to do more from the get-go.

Take an internship or make something of your own

Hands-on experience is key to getting hired by newsrooms.

“There’s no reason why you should only be creating content as an intern,” Hatch said. The tools are available to create content on your own. Even if it’s a personal blog or other project, “it’s still practice, it’s still learning, it shows a passion and an entrepreneurial spirit and it can be a difference between getting something or not.”

Tagged: back in the newsroom ijnet skills specialization storytelling