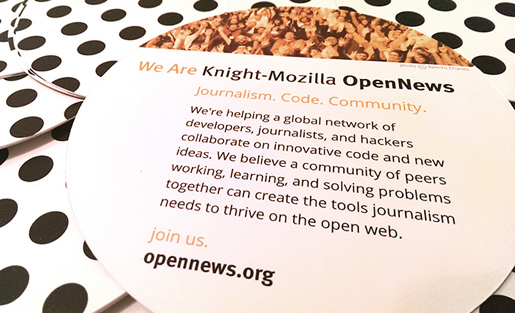 OpenNews, the New York Times and the Washington Post are teaming up to create an online community platform for reader comments and contributions.

Community is at the core of what we do at Knight-Mozilla OpenNews—helping to build and strengthen the community of people writing code in journalism. And community is a big part of what has made Mozilla successful—the global community of contributors that has helped to build the Firefox web browser.

Community is also at the core of journalism: whether it’s geographic communities that form the bedrock of local news or the communities of interest that form around subjects as broad as basketball and politics, journalism has always had community at its core.

"Whether it’s geographic communities that form the bedrock of local news or the communities of interest that form around subjects as broad as basketball and politics, journalism has always had community at its core."

Which is why it’s exciting to announce that today, Knight-Mozilla OpenNews, the New York Times, and the Washington Post are joining forces to create a next-generation community platform for journalism. The web offers all sorts of new and exciting ways of engaging with communities far beyond the ubiquitous (and often terrible) comments sections at the bottom of articles. We’re looking forward to writing code together to enable them.

We don’t see this project as a single product, but instead as building blocks for engaging communities throughout the web. Open source at its core, and focused on giving users unprecedented control over their identity and contributions, this is a project we believe in.

It’s also a unique collaboration between two of the largest and most respected news organizations in the world. Enabling that kind of collaboration is something that we’ve worked on for from the beginning at OpenNews. While this is a huge project — the grant is equal to the one that enables us to do our core work at OpenNews — it also feels like a natural extension of what we do.

Finally, this is a project that has the opportunity not only to improve community engagement in journalism, but to strengthen the web itself. Technologies like Backbone.js, D3, and Django have all been forged and tested in the demanding environment of the newsroom, and then gone on to transform the way people build on the web. We don’t know that there’s a Backbone lurking inside this project, but we’re sure as hell going to find out.

There’s much more to come, and we’ll be getting down to work soon. But for now, here’s to new experiments, to thinking big, and to communities, new and old—and all the the things we can accomplish, together.