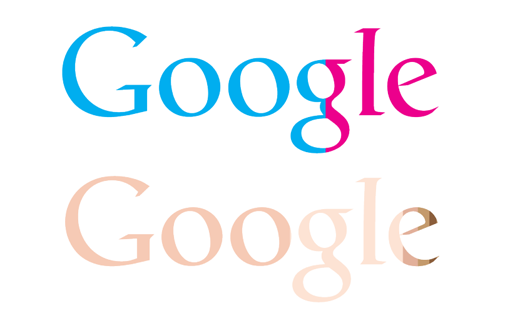 Disclaimer: I’ve been a contractor with Google’s civic research team this year. I also bought two shares of Google stock a few years ago. This post has nothing to do with either of those two things.

In a surprising gesture of transparency, Google has released their internal figures on employee diversity. The very first sentence from Google’s Laszlo Block gets to the point: “We’re not where we want to be when it comes to diversity.” The numbers aren’t great, but then again, it’s hard to compare Google to other tech companies of their size and stature because they’re the first to release this information.

“We’re not where we want to be when it comes to diversity.” -Google's Laszlo Block

I’ve created two Google Doodles of my own to visualize these statistics:

It’s apparent in these figures that whites and Asians are doing relatively well in the technology economy, whereas blacks and Hispanics are significantly underrepresented:

Helpfully, Google’s interactive charts let you filter the diversity figures by “tech” and “leadership.” These numbers are even less flattering than the overall picture. A full 79 percent of Google’s leadership are men, and 72 percent of its leadership is white. (Here’s Google’s official U.S. government form, where they report that they employ zero “craft workers” and not one “operative.”)

Easter egg: It’s not super obvious, but Google suggests some ways they might help improve these numbers if you click the charts:

“Women are half the world’s population. We’ve got to increase their participation in computer science and keep women at Google on the path to leadership.”

“Minority groups are underrepresented in tech and in the U.S. education system. We’ve got to increase early access to computer science and expand our search for the world’s most talented people.”

Matt Stempeck researches and designs technologies for civic impact and blogs about it at PBS and elsewhere. He has a Master’s of Science from the MIT Media Lab, where he was one of the first two students admitted to the Center for Civic Media. At the Media Lab, Matt quantified media attention to stories like Trayvon Martin, studied the emerging field of peer-to-peer aid, and built creative tools to fight misinformation online. Prior to MIT, Matt led online campaigns, communications, and tech trainings for the New Organizing Institute, Americans for Campaign Reform, and EchoDitto. He graduated with high honors from the University of Maryland, College Park, where he wrote a thesis on the impact of political blogs on mainstream journalism. You can follow him on Twitter at @mstem

This post originally appeared on the author’s mstem blog.