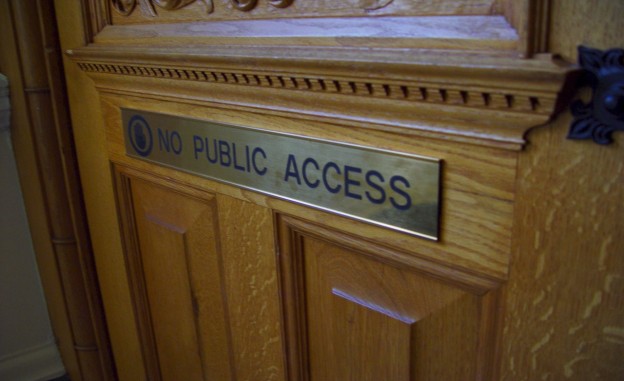 Photo available under a Creative Commons license by jmv of Flickr.

“Former,” because in January 2014 she resigned from her position at OSU after a three-month battle over an open records request she made under Oregon’s Open Records Law. Willson requested campus crime statistics and employee compensation information to share with her students as part of a data journalism exercise.

"The CMA code says student media should be student media. But she [Willson] was looking to provide her students with a shortcut to get the information, so she could teach them. She was doing her job." - Mike Hiestand

The first “no” she received cited a statutory exemption that protected proprietary information such as the data dictionaries and record layouts containing the statistics she sought. Willson amended her request to avoid the concerns raised in the denial, only to be told she lacked the legal right to request the records in the first place.

“They said, ‘You’re not a person under Oregon law,’” Willson said in a phone interview. “I kind of chuckled and said that’s fine, I’m also a journalist and a private citizen, so I’ll ask for it that way.“

Willson filed a new request, this time in her role as a freelance journalist and in partnership with another journalist and one of her students. That’s when she was called to speak with OSU’s Director of Human Resources and told her continued actions were not only a violation of her contract, but also of the College Media Advisers’ (CMA) code of ethics.

If this were a movie, the plucky adviser would stand up to the university, establish her legal rights, defend them with vigor and eventually win. Unfortunately, the more likely scenario is that the intimidation forces the adviser to back down from the issue or, as in Willson’s case, from the job itself.

There are bad and ugly aspects of this story, but there is good too – and valuable lessons for journalism educators and advisers alike.

The ugly: It depends on what the definition of “is” is

The College Media Association (CMA)’s personal code for advisers states: “Faculty, staff and other non-students who assume advisory roles with student media must remain aware of their obligation to defend and teach without censoring, editing, directing or producing. It should not be the media adviser’s role to modify student writing or broadcasts, for it robs student journalists of educational opportunity and could severely damage their rights to free expression.”

Willson’s specific violation, she was told, was “denying a student the opportunity to excel” by personally requesting the information rather than having her students do so, even if doing so would, in Willson’s words, “set them up to fail.”

Mike Hiestand, founder of Zenger Consulting and the Special Project Attorney with the Student

Press Law Center, said such an approach bends the CMA policy in a way it was never intended.

“The CMA code says student media should be student media,” Hiestand said in an interview. “But in this case, she [Willson] was looking to provide her students with a shortcut to get the information, so she could teach them. She was doing her job.”

This situation reminds us that when interpretations clash, the higher authority tends to have the upper hand. The challenge, then, is in knowing what higher authorities exist for appeals or reconsideration.

The bad: Public employees aren’t “people” under the law

When is a door not a door? When it’s “ajar.” So when is a “person” not a “person?” Apparently, in the state of Oregon, it’s when she works for the government and seeks an open record, although such an interpretation not readily evident:

As a journalist, Willson said she knew the open records process and her rights as a citizen. The idea that she wouldn’t be considered a “person” under the law in her capacity as a journalism adviser at a public university was bewildering.

According to Hiestand, she had reason to be confused – he said few states place any kind of specific restrictions on which “people” may request an open record. For example, Louisiana requires requesters to be “of the age of majority,” and open records laws in Georgia, Tennessee and Virginia only allow citizens of those states to request records.

There is, however, precedent for the idea that a public employee surrenders some of the speech rights of a citizen. A handful of U.S. Supreme Court cases have determined the breadth and limits of First Amendment protections for public employee speech. Most recently, in Garcetti v. Ceballos, the Court determined that the government-as-employer could punish an employee for speech, up to and including termination, if the speech was made in the course of the employee’s official duties. While the Supreme Court declined to address the implications of Garcetti on academic freedom (and a recent Ninth Circuit decision has flatly rejected application of the precedent to an academic writing), Hiestand said the case and situations like Willson’s represent a disturbing trend.

“The people who know most what’s going on, and the people in the best position to fix things and make them work – we’re cutting them off at the source.”

The good: Journalism educators don’t need to know everything

Now working for the Willamette Week, Willson said she has not given up on journalism education and plans to stay connected to student media. Her message to other journalism educators and advisers about open records laws? There’s good news: You don’t have to be the expert.

“This is the coolest thing about being in journalism. You don’t have to know how to do everything. You just need to know how to contact the people who do,” she said. “I’ve filed thousands of public records requests, but if I didn’t know how to do it, I could bring in a media lawyer or another journalist to show us all how.”

And as for the question of “personhood” for public employees?

“It’s an argument only a lawyer could love,” Hiestand said.