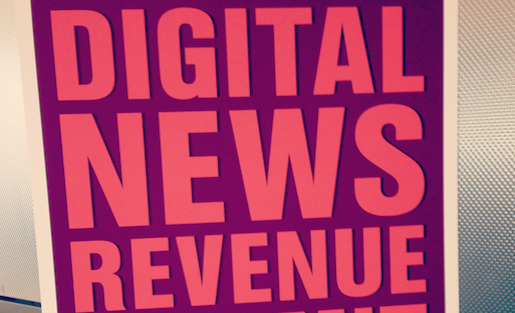 AUSTIN, TEXAS — On Thursday, media professionals, researchers and academics gathered to address the increasingly tricky, ever-present question looming over the journalism industry: in the digital era, what are the best revenue sources for news? The workshop was organized by Jake Batsell, a Texas Tribune fellow who was tasked with studying the non-profit success of the Tribune and sharing it with smaller non-profit outfits.

Many of those outlets were on hand at the Belo Center for New Media at the University of Texas for the day-long “Digital News Revenue Summit,” which took place the day before the 15th Annual International Symposium on Online Journalism. Through panel talks and expert conversations on funding possibilities like corporate sponsorships, membership and less traditional rev streams like events and training workshops, we took away these nuggets of wisdom on revenue streams.

As Pew Research Center Journalism Project’s Senior Researcher Jesse Holcomb told nearly 100 international press members in a more detailed look at Pew’s State of the News Media 2014 report on April 3, $300 million of venture capital was invested in digital journalism last year, according to his team’s calculations. While Pew only reported private capital as one percent of the overall (approximately) $65 billion industry, that figure isn’t insignificant — and it’s likely that media organizations will begin working harder to seek out venture capital in the future.

“Feed and love” your crowdsourcing campaign, Texas Tribune Chief Innovation Officer Rodney Gibbs told the crowd. Using the Trib’s example of a recent successful Kickstarter experiment, during which they rode on the coattails of Texas State Sen. Wendy Davis’ filibuster last summer to set up the ask; since the Texas Tribune gained so much attention state-, nation- and even worldwide with its C-SPAN-esque coverage of the filibuster, they figured they could do it again for the entire 2014 governor’s race.

But Gibbs said the only reason they were able to raise the necessary $60,000 for livestreaming equipment and capabilities was because of their preparation, execution and followup. They started out with a simple idea that could be sold like an “elevator pitch”; “Help the Tribune do more livestreaming” was the campaign, and it was easy to explain. “You can’t prep enough before the launch,” he said — that is, if you’re going to dabble in crowdsourcing. Secondly, “love” your Kickstarter campaign by promoting it relentlessly on social media (hourly), thanking backers (even the small ones) and approaching influential media members, bloggers and people with a vested interest in your project. The Tribune used a website called Socialbro, which helps you filter Twitter users down to who might have a unique interest in your cause, to target those who are willing to tweet and retweet about your campaign. While they had success with Kickstarter, Gibbs said many publishers these days are going with Indiegogo or BackerKit for mass support of a particular project. Though news companies run the risk of fatiguing their readers with the constant stream of asking for money, the risk is lowered if you make the campaign short (the Trib’s was 3 weeks, which Gibbs said was almost enough to completely exhaust him given the all-or-nothing nature of the Kickstarter model). Gibbs also said it’s vital to give contributors updates after the campaign and, of course, fulfill their rewards promptly. Finally, he said not to hesitate to “be a stalker” — watch successful campaigns and take what you can away from them.

Agnes Varnum is the director of events at the Texas Tribune, which has become a sort of paradigm for digital news revenue diversification, but more specifically for their sustained success in event production. One of her most valuable points was to keep production costs as low as possible without sacrificing quality. “I’ve never once had someone say ‘Gee, that free lunch sucked.'” “It’s okay if it’s on paper plates … you only want to spend as much as you have to,” Varnum said. If the coffee and pastries are breaking the bank, and if you can nix it without attendance being affected, it may be work it to get rid of the extraneous cost. If you have coordinated an exceptional program with good speakers, the rest shouldn’t matter much at all, said Varnum.

4. Take advantage of the moment to gain members

It’s clear how much the Texas Tribune has risen in the ranks just since its inception in late 2009. One reason for that esteem across the street is sheer reach, which they couldn’t have achieved without taking advantage of powerful moments. Said assistant director of development Natalie Choate, sometimes a “non-campaign” season is more meaningful for a non-profit news organization than a concentrated funding drive. During the Davis filibuster, Choate tweeted constantly (every five seconds, she said jokingly) about how to become a Tribune member and therefore support the live-streaming work they were doing). The $43,000 in revenue she helped bring in the door just during the political event (which all happened in a four hour period) led the news operation to cancel their next planned drive. By taking advantage of a relevant, current event and communicating the value of its coverage to potential Tribune readers, the pub reached hundreds of new readers — 87 percent of which had never given to the operation before.

“Free money” is already extremely difficult to obtain, and it’s even more of a bear when you must reapply for foundational grants annually. So, it’s more efficient to secure multi-year commitments, said the Trib’s Director of Development Maggie Gilburg. They’re a “win-win” because it’s less work for both sides. The media company developed a “circle membership program” for bigger givers who will commit to three years, which has become a nice source of income. Texas Tribune Fellow, Digital News Revenue Summit coordinator and PBS Idea Lab contributor Jake Batsell writes more in-depth here about how nonprofit media can build up its membership base, using the Tribune as a case study.

“Philanthropy is our bridge to the future right now,” said Brant Houston, board chair at the Investigative News Network and Knight Chair at the University of Illinois, referring to the work public interest journalism operations do. Ideally, nonprofit media enterprises would work with budgets halving earned income and philanthropic gifts, Houston said. “But we need to be a little bit more accurate about what earned income is.”

6. Decide what success is before you start

With no standards across the board on engagement and so many single-topic news sites popping up, it’s often difficult for upstarts to determine their success. Tow Center fellows Lara Setrakian and Kristin Nolan studied 20 startup newsrooms and found that many of the editorial teams weren’t tracking their engagement over time. While they all built their sites around a particular cause with a strong community — Setrakian called these consumers “super users” — some were held back by a lack of technology skills. But how do they decide if it’s worth the time and resources to continue in their quest for reporting?

In the case of InsideClimate News, a prestigious award (a Pulitzer in National Reporting) helped with the decision. Noted Setrakian, accolades of this caliber give operations like InsideClimate News the power to continue. Arguing that a single subject news website’s existence from year to year equals success, too, the creator of Syria Deeply said “reach and impact” were also measurements of success. Nolan believes these kinds of operations must have strong marketing to last. If you’re doing the best journalism within your subject area but no one is reading, you have a PR problem — which won’t make your reporting very successful long-term.

The 15th International Symposium on Online Journalism is April 4-5. Stay tuned for our report from the event.