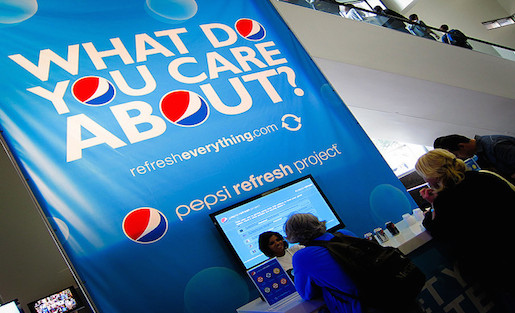 Brands are all over SXSW, whether they're being featured in venue displays or in documentaries shown at the festival. Photo by Nan Palmero on Flickr and used here with Creative Commons license.

Branded content, from advertising to sponsored work, has long used the skills of filmmakers and (often ex-) journalists. At SXSW 2014, unbranded content — sponsored but without an obvious pitch for product or even necessarily a direct link to the sponsor — was in full flourish, with companies recruiting for talent. The biggest question for recruits may be ethics.

Unbranded content showcased at SXSW featured short and longish documentaries, as well as journalistic work ranging from blog posts to features. For instance, Whole Foods’ Dark Rye produces a quarterly web magazine that features in-house-produced, short-to-medium-length video storytelling. Topics range from feral pigs to biking as meditation to bottle exchange. With help from Participant Production’s TAG unit, American Express developed a campaign for financial inclusion that features a film by big shiny name Davis Guggenheim (“Waiting for Superman,” “Inconvenient Truth”), to be released in June. Dick’s Sporting Goods is promoting a new initiative to leverage community investment in youth sports with a documentary, a preview of which showcased at SXSW at both a panel and a party. GOOD/Corps, which is working with the company, has also done similar projects with Pepsi, Starbucks, The Nature Conservancy and others. Yet another SXSW debut was the announcement that Vice Media is producing documentaries for an AT&T Tumblr page and YouTube channel, chronicling how mobile phones feature in youth culture. Two webisode series are also planned.

"The challenge of figuring out how to decide which jobs can be executed with integrity, even with a direct sponsor, is a real one."

David Marshall made “Beginning with the End” with proceeds from branded-content production.

Journalists are increasingly finding their services useful both to companies and to information providers. Just try to sort out the unbranded content from non-sponsored journalism at, say, BuzzFeed or Gawker. You can work as a journalist for Twitter. The practice has grown more quickly than anyone expected, and everyone’s scrambling. As the Global Poverty Project’s Hugh Evans said at a SXSW panel, “Let’s face it, we’re all now media and tech companies too.”

At SXSW, the company Contently was selling journalists hard on its intermediary services, as a platform for freelance journalists and companies to find each other for the responsible production of branded and unbranded content. From a booth at the annual Knight Foundation-funded journalism party, you could get not only a pretty nice T-shirt and other swag but a copy of Contently Quarterly, which along with online resources such as the Contently Strategist, showcases trends and strategies in the field. One of the current takeaways: visual is king, because people love to share images and videos. Another: Journalists are in hot demand by brands and their reputations are surviving the experience.

The ethical questions raised by the ravenous appetite of brands for storytellers are familiar ones to documentary filmmakers, who also compose stories from facts garnered in their research. Many of them work as small companies on a contract basis, both taking sponsored work and doing their own projects—some of which are self-funded with sponsored-work profits. At SXSW, for instance, David Marshall had “Beginning with the End” in competition. The small, well-crafted film, which tells the story of high schoolers doing an internship in a hospice, was funded in part with proceeds from Marshall’s other job for an advertising agency, and is part of the Blue Sky Project, which incubates “documentary films focused on underreported social issues that shape an open and enlightened society.”

His work at the ad agency focuses on long-form storytelling with integrity: “These long stories are becoming more and more important to the corporate and advertising film world. As a result of how we access media, people want more rich stories about their buying choices. It’s not just today’s marketing story. The stories have to be rich and true.” For him, the work has to have integrity, whatever the sponsor.

How Contently solves the ethics problem

Dick’s Sporting Goods launched the “Sports Matter” campaign to leverage community investment in youth sports with a documentary, a preview of which showcased at SXSW.

For journalists nervous about the prospect of compromising their craft or reputations, Contently has an extensive code of ethics, which also links to and endorses more traditional codes of journalistic ethics. It includes ethical guidelines not only for journalists, but also for clients (including: give credit, pay on time, fully disclose to the writer, don’t ask them to do anything unethical), and for itself. Transparency is a critical value in the mix.

The challenge of figuring out how to decide which jobs can be executed with integrity, even with a direct sponsor, is a real one. Doc filmmakers face those challenges without doc-specific codes of ethics that have been so important in legitimating the social role of the journalist as a truth-teller in society, but with lots of experience. Meanwhile, many journalists who have been able in the past simply to lean on the standards of their organization now find themselves contract workers on a more confusing landscape, even though their ethics codes still apply. Journalists and documentarians, now increasingly working in the same ethically complex environment, may find common ground in the challenge of telling meaningful stories with integrity.