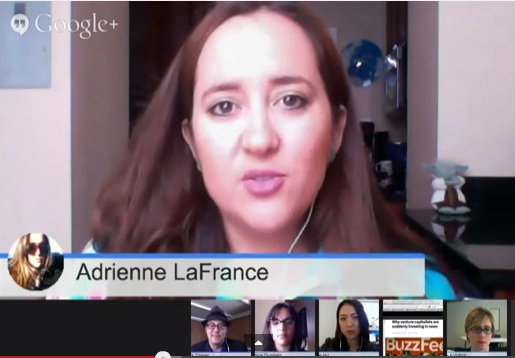 On this episode of the Mediatwits, panelists discussed Pew's 2014 State of the Media report, with special guest Adrienne LaFrance.

On Wednesday, Pew released its eleventh annual State of the News Media report, featuring a wealth of data and analysis for journalists to chew over. The report underscored the optimism present in media this year, especially with the growth of serious digital reporting outfits. A crop of new digital outlets, such as those created by Pierre Omidyar with First Look Media and Ezra Klein with Vox spelled good news for the future. But while this dynamism is encouraging, the question of creating a sustainable financial model for journalism seems to remain elusive. Other encouraging signs included the growth of mobile ad revenues as well as video content at various news outlets. This week, we’re joined by special guests Amy Mitchell from Pew to discuss the report, as well as Adrienne LaFrance, who wrote an article about it for Quartz. We’ll also be joined by regulars Monica Guzman of the Seattle Times and Geekwire and NPR’s Elise Hu, with PBS MediaShift’s Mark Glaser hosting.

Adrienne LaFrance is a reporter and freelance writer focusing on tech, media and other topics based in Washington, D.C. You can follow her on Twitter @AdrienneLaF.

Amy Mitchell is director of Journalism Research for the Pew Research Center and oversees the center’s Journalism Project. She has expertise in research design, methods evaluation, analysis and writing, including for the annual report on the State of the News Media, research into how technology is changing the flow of news information today and what this all means for the way news outlets gather and report the news. Prior to joining Pew Research Center, Mitchell was a congressional research associate at the American Enterprise Institute, where she researched public policy and the relationship of the press, the public and government.

Recently, digital-native media outlets have seen increased interest from venture capitalists who believe in a growing digital news business — a boon for sites such as BuzzFeed, Business Insider and Upworthy. But data from the Pew report checks those who have viewed these investments with too much optimism. Despite these headline-winning capital infusions, venture capital and philanthropy only account for 1 percent of total news revenue. Old school revenue streams like advertising and pay walls continue to serve as the main revenue source for news media. But revenue was only a small part of the large report’s findings, which also found that consumers are spending more time in front of screens, online video is on the rise, and social media is playing an increasingly important role in journalism. And while there still continue to be cuts at legacy newspaper operations, the report outlines new jobs created by digital upstarts such as Vice, HuffPo and Politico.