How First Look Pushes Verticals Ahead of Overarching ‘Magazine’ Brand 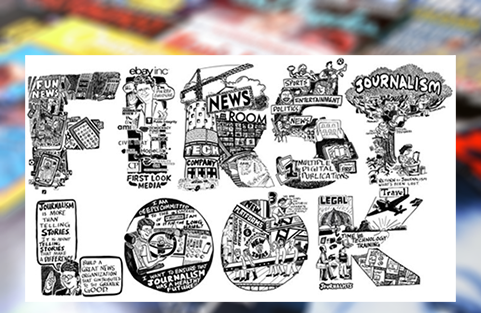 Background image of magazine covers by FontShop on Flickr.

First Look Media has gotten plenty of coverage for its strategy of creating “digital magazines” based on the work of specific journalists with unique voices who will dive deeply into focused topics. Its first magazine, The Intercept, went live on Feb. 10 and features reporting by Glenn Greenwald, Laura Poitras and Jeremy Scahill.

"Magazines were doing a lot of what the Internet does, before the Internet was around. If you wanted deep expertise, if you wanted to be around people who shared a passion, you’d go to magazines."

But according to Executive Editor Eric Bates, a print magazine veteran formerly at Rolling Stone, the term makes sense, not so much because of First Look publications’ physical format, but because he feels they have other qualities of magazines: sharing their readers’ passions, offering distinctive voices, and engaging with readers.

“I was surprised when people started raising that question,” he said. “To me, ‘magazine’ is a very clear term. It helps you get instant ideas of what we’re doing.”

From Verticals to Brand

First Look’s sites/magazines will each be distinct publications that share First Look as their publisher. Bates said its position will be like that of major magazine publishers like Time Inc., which publishes multiple magazines without drawing attention to the connection among the titles. Readers of Time’s Entertainment Weekly, for example, may not know that Time also publishes Real Simple. Readers who go directly to The Intercept may not be aware of the other First Look magazines when they arrive at the site.

“What we’re trying to distinguish is the idea of separate publications that have a life of their own,” he explained.

There will be one important link among First Look’s digital magazines: The First Look flagship site, not yet revealed, will be a hub for their content and will link to the magazines’ sites. In a way, the flagship site itself will be like a “general interest” publication.

Bates says readers will find First Look content either by going directly to the specialized site that interests them, or by finding their way into those specific topics through the flagship site.

The flagship site sounds like the websites of many journalism organizations that feature specialized content areas, or “verticals,” but First Look is working in the opposite direction: not from general interest to verticals, but from verticals to general interest.

“We could have taken the traditional route and built our own verticals, then go get an editor to oversee each of those and say, ‘We’ll stamp all of the content with our unique brand.’ … That’s how people build websites right now,” Bates said. “What happens if, instead of centrally managing all those verticals, we approach it in a different way? We set them up with a high degree of editorial independence, and it’s an entirely different proposition.”

Bates says the kinds of journalists who are interested in managing their own magazines, like The Intercept, under the First Look umbrella will create better work.

“There’s a different level of talent that would be interested in that proposition. It changes the quality of the journalism you can produce and diversifies it,” he said. “It makes the journalism more deeply informed and deeply engaging to an audience.”

These journalists will also be able to share their knowledge of and enthusiasm for their subject with a greater intensity than they could at an organization where the overarching brand was the first consideration, and the individual journalist’s voice was secondary.

As Bates says, editors’ and writers’ shared interest in a topic has always been a characteristic of magazines, in all their formats.

“Magazines were doing a lot of what the Internet does, before the Internet was around. If you wanted deep expertise, if you wanted to be around people who shared a passion, you’d go to magazines,” Bates said. He sees First Look’s digital magazines as following in this tradition. “The idea that there’s a publication that exists for multiple devices and multiple platforms, with a strong editorial vision and voice, is really reminiscent of what magazines do.”

And First Look is ambitious about the power of these passionate voices. As the company launches more digital magazines, its aggregation of all of these journalists’ unique perspectives will make the company a place “people can come to find anything they’re interested in in the world,” Bates said.