The Shape of Learning: How Media Consumers Become Media Producers 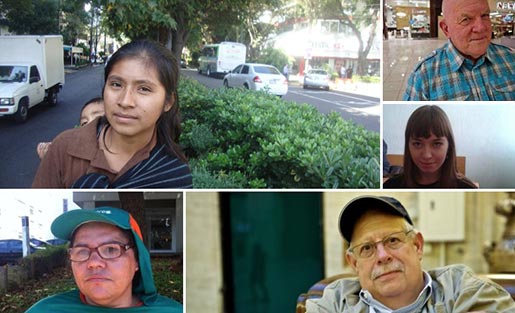 Imagine an online environment for learning the art and craft of multimedia journalism, a place for media consumers to become media producers. We think this goal realizable because … we’re doing it.

In the Transom Online Workshop (TOW) a bunch of wanna-be producers come together as a group on Facebook, where a couple of instructors lead them through four basic exercises that require the students learn to use the tools and software involved in photo journalism, radio, and video production. It’s not easy, but they figure it out, with help from each other.

"Every smartphone puts a complete journalists’ field-recording kit in peoples’ pockets. Every computer puts a multimedia production suite on their desktop."

It’s a prototype and we’ve made some mistakes, learned a lot. This is where we are now, starting the second beta test (Knight Prototype Fund-ed). We designed the workshops so people could quickly become better storytellers, and so we, the designers, could observe the way someone acquires a creative skill, such as storytelling.

This video from our alpha-test workshop is the first story learner Emile B. Klein ever produced:

Learning has a shape; it has a rhythm. By watching learning happen, we could see where to add structure, or adjust schedule, or just let the course find its own flow (“paving cowpaths”). Here’s what we’ve found so far.

There’s a divide between those who know how to use technology to reimagine learning and those who simply use technology to digitize traditional learning. We take a chalkboard and we digitize it. We take a text book we digitize it. We take a boring linear lecture and we make digital boring linear lectures. And my fear is that if we continue on this trajectory, very soon we will have successfully replicated in digital format exactly all the traditional teaching methods that we use today. What we should be doing using technology to do entirely new things that simply were not possible before.
—Richard Culatta, “Reimagining Learning” TEDxBeaconStreet
Director, Office of Educational Technology, U.S. Department of Education

We know most online students are not college students. Most already have a degree and a job. Most take online classes to enhance their job skills or they just have an interest in the topic. Few are seeking a degree.

So why do we design online courses like college courses? In the TOW we quickly realized we needed no quizzes or tests. We didn’t need to talk to the learners like college kids, because in many ways they’re our peers, already professionally proficient in their respective fields.

We began to understand all that mattered was how well they learned to tell a story. In education theory this is called Project-Based Learning. Their work assignments were the course, would become their portfolio, and would provide us with assignment examples for future TOWs.

The Lean Startup: Minimize total time through the MVP loop

The minimum viable product is that version of a new product which allows a team to collect the maximum amount of validated learning about customers with the least effort.
—Eric Ries, “Minimum Viable Product: a guide”

We had neither institutions nor multimillions, yet by clearly defining our educational goals, then applying MVP techniques, our first workshop was up in a month.

From Classroom to Chatroom

Conversation is king. We knew the TOW’s success was dependent upon active learner-to-learner discussions. What we got was a quantity and quality of discussion that equalled most face-to-face classrooms. We think this mostly due to our choice of “learning platform.”

We’d taken dozens of online classes and tested dozens of LMSes. All suffered the same problem: each forum topic was silo-ed, bound to a single assignment. When that assignment passed, the ideas in that discussion were essentially abandoned. The continuity found in normal human dialogue was lost.

And the LMS forums segregated discussions from assignments from learning materials from student work submissions. Navigating the course required constant clicking between all the places the course materials were kept.

So we opted for a free, billion-dollar tool that could handle images, audio/video embeds, links, and robust conversation: Facebook. We can’t easily dictate the direction of learner discussions, as we could in an LMS. But what we lose in dictatorial powers we gain in participation, a free flow of ideas, and the ability to quickly read/scroll through all the latest posts and comments. It’s a bit chaotic and free-form, without a lot of structure, just like a real conversation.

Perhaps this explains study results showing high retention of Facebook content: “Participants’ memory for Facebook posts was found to be strikingly stronger than their memory for human faces or sentences from books — a magnitude comparable to the difference in memory strength between amnesiacs and healthy controls.” The study, “Major memory for microblogs” (Memory & Cognition, May 2013), postulated, “[This] remarkable memory for microblogs may be [due to] their being the largely spontaneous and natural emanations of the human mind.”

What’s interesting about the increasingly digital nature of our students is that they can be found actively participating almost everywhere else on the web outside the LMS. We’ve heard online teachers talk about how difficult it is to get their students to join in, usually citing their lack of preparation for online work; but the truth is most students, no matter how diverse, are already online, using the tools familiar and relevant to them, tools connecting them to communities that compel them to engage. Discussion forums, as they’re often used, do not encourage, or in some cases do not allow, students to meet, greet, challenge, question, and collaborate in the dynamic ways they do elsewhere on the web.…

The vast majority of students are already living their lives in the open, and so an open platform for discussion amplifies the presence of learning in their day-to-day lives. Instead of entering a virtual space and “putting on their student hat”, learning becomes integrated into students’ other activities online. The open discussion environment is germane to, persistent within, and contiguous with student lives.
Hybrid Pedagogy, “The Discussion Forum is Dead; Long Live the Discussion Forum”

We chose not to spend substantial time and money building a new tool or cobbling together existing tools, then teaching learners how it all works. People are already on Facebook; rather than make them come to us, we went to them. The service’s 1 billion users have rigorously tested the interface, and find it relatively easy to post all manner of multimedia.

Teachers should prepare the student for the student’s future, not for the teacher’s past. Learning to Learn is the main solution I offer to help students cope with the rapid changes they will have to endure in their fields.
—“The Art of Doing Science and Engineering: Learning to Learn” (PDF)
Richard W.Hamming (© 1997), U.S. Naval Postgraduate School, Monterey, California

So when a learner asks a question, we wait before responding, to see if other learners help. They usually do. It’s so much more satisfying to see learners reach aha moments on their own.

TOW 0.2 had 24 learners on six continents spanning 20 timezones — making real-time meetings impractical. But witness their cohesion in this asynchronous exchange about the TOW’s first assignment, to interview seven strangers, asking the same question, “What are you afraid of?”:

Honestly, this assignment shows and reflects one of the fears we have. We could have interviewed ourselves and answered: “I am afraid of reaching out to people and interviewing them.”

Every smartphone puts a complete journalists’ field-recording kit in peoples’ pockets. Every computer puts a multimedia production suite on their desktop. From Rodney King’s beating to the Russian meteor, citizens have been first to document major news events.

Every day people record millions of documentary elements. The TOW’s goal is to teach as many people as possible how to fashion those elements into cohesive, entertaining, moving, and informative multimedia stories.

A journalist can be anyone. A story can be a database. It can be available anytime, anywhere in any medium. It can include commentary and analysis from the community itself. If the news community doesn’t adapt, we may lose an entire century of professional journalism development.
—Eric Newton, Searchlights and Sunglasses

In the TOW audio assignment, learners ask strangers “What are you afraid of?”:

Barrett Golding is Lead Dev of the (Knight Prototype Fund-ed) Transom Online Workshop. He is Fearless Leader of the Peabody Award-winning pubradio series Hearing Voices from NPR and a United States Artists Rasmuson Fellow in Media. He was General Manager of KGLT-Bozeman and an NPR Audio Engineer in DC. Other accolades include: the NFCB Silver Reel, the Scripps Howard Award for Journalism Excellence, the ABA Gavel Award, Harvestworks Artist-in-Residence, Montana Arts Council Fellowship, and grants from CPB, NEA, Rockefeller and Andy Warhol Foundations. He is a 35-year volunteer DJ/producer at kick-ass KGLT.

2 responses to “The Shape of Learning: How Media Consumers Become Media Producers”