The J-School Scrum: Bringing Agile Development Into the Classroom 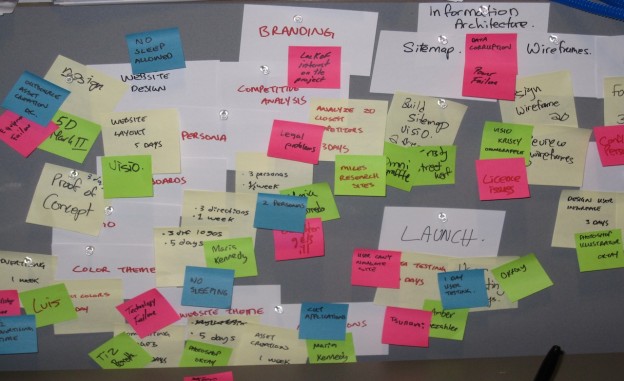 Making an introvert and an extrovert collaborate can be like plugging an extension cord into itself.

Journalism professors see this in the classroom all the time: When an outgoing student gets paired with a shy student for a group assignment, the two students frequently don’t know how to talk to each other. They rush through the assignment and then sit there quietly next to each other. At best, they use the group time to work independently. At worst, they start texting or daydreaming.

I’ve seen this same breakdown in social interaction happen when journalists and coders try to work together.

In the classroom, we prevent the problem by giving students rules for group work. Professors know that even the loosest instructions, like “spend exactly 5 minutes discussing this and that with your partner,” will help wildly different personalities collaborate successfully and learn from each other.

In the coding world, we prevent the problem by using a software development methodology, a set of rules for working together that governs the process of making software.

As more journalism schools teach advanced digital skills, some j-school professors are borrowing from software development methodologies to guide projects in the classroom.

The most common variant is agile, a development methodology popular among web developers. Agile is based on the idea of iterative, incremental development. Every large software project is broken down into small, achievable components. The components are ranked in importance (usually features are categorized as “must-have” or “nice to have”) and are grouped into time periods called sprints. During a sprint, each team member works intensely on her part of the project and completes something that works. The team reconvenes at the end of the sprint to compare notes, see what has been accomplished and adjust the list of remaining tasks.

In the classroom, every semester feels like a sprint, so some professors feel immediately comfortable with agile terminology. Sasha Anawalt, associate professor at USC Annenberg School for Communication & Journalism and director of the USC Arts Journalism Programs, now uses sprints to organize her students’ semester-long independent arts journalism projects. Each student reports her progress in a “scrum,” a short meeting where every participant says what she did that week, what she plans to do next and what the obstacles are in her way. “We scrum at the beginning of every class now,” says Anawalt. “It really works.”

The term scrum is derived from rugby, where a scrum restarts the game after the ball has gone out of play. A software (or journalism) scrum gets the team back together and gets everyone moving in the appropriate direction.

Jacqueline Marino, an associate professor of journalism at Kent State University’s School of Journalism and Mass Communication, uses scrums and agile-like processes in a course that brings together journalists and programmers. She learned about agile from Jeremy Gilbert, an associate professor at Northwestern University’s Medill School of Journalism, Media, and Integrated Marketing Communications. Gilbert has used agile as a way to organize his journalism and technology class, in which the students collaborate on a single project for multiple weeks. Gilbert’s students typically scrum a few times over the course of the semester. Agile helps the whole group move forward as a unit without fracturing. “People in newsrooms need digital tools, and we need a process by which we can make things quickly and evaluate them and use them,” says Gilbert. “Sometimes stealing from software processes is the best way to do it, sometimes stealing from manufacturing processes.”

Even though it is a methodology that governs high-tech projects, the idea of the classroom scrum has spread because of a handful of personal networks. I plan to scrum once a week in my Spring 2014 data journalism class at Temple University, in part because it worked well in Anawalt’s classroom. She and I learned agile at the same time, from developer Miles Lightwood, who was (like me) a 2012 USC Annenberg/Getty Arts Journalism Fellow.

Journalism students uniformly see their introduction to agile as a positive experience in their development as technologically literate journalists. “Using agile means that we only build things that work. That’s pretty critical,” says Gilbert. “Let’s say you have 10 things you want to build. With agile, you build them in the order of importance. At the end of a 10-week semester, you may have two of those things built, or 10. Either way, you have a success. If we have 10 weeks in the semester, and we do one thing every week, we’ll be fine.”

His students are also introduced to the idea of waterfall development, which is in some ways the opposite of agile. In waterfall, lots of requirements are created up front, and each project follows a very linear path. Gilbert contrasts agile to waterfall: “If we used a waterfall method, we would always come out with a failure.”

Agile in the classroom does more than just provide a framework for introverts and extroverts to work together on tech projects. It also introduces students to the workflow that is the de facto development standard in the few newsrooms that have full-fledged news development teams. The data journalism teams at NPR, Chicago Tribune, Washington Post, ProPublica, and the New York Times all use agile (or agile-ish) processes.

Brian Boyer at NPR may be the #newsnerd community’s most vocal agile evangelist. “Agile is a rigorous and disciplined approach to software project management, when implemented correctly. I believe that it’s essential to development on news deadlines,” Boyer wrote recently.

It all comes back to the academy, however. The first place Boyer used agile on a news project, not just in software development? In Jeremy Gilbert’s classroom at Medill.

4 responses to “The J-School Scrum: Bringing Agile Development Into the Classroom”