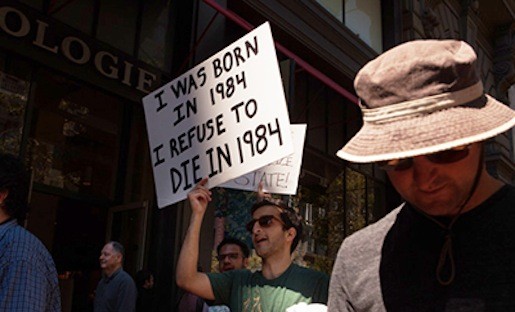 When President Obama takes the lectern to discuss U.S. surveillance policy, as he is expected to do Friday, those hoping for sweeping reform are likely to be disappointed. As reported in The New York Times, the president appears poised to reject many of the recommendations of his Review Group on Intelligence and Communications Technologies, a brain trust of five experts he handpicked to study U.S. intelligence practices in the wake of disclosures by former NSA contractor Edward Snowden.

"Rather than allow the U.S. to hurtle toward global Hobbesian cyber-anarchy, the review group recommends the U.S. lead by moral example."

This would be a mistake.

The White House review group examined the issues soberly and carefully, producing a 308-page report that includes 46 recommendations for surveillance reform. Its members published an opinion piece in The New York Times publicly highlighting what they felt were the most important recommendations, and yesterday each of them appeared before the Senate Judiciary Committee to present testimony. Nonetheless, the president appears unconvinced, and instead seems willing to “give up essential Liberty, to purchase a little temporary Safety,” as Benjamin Franklin put it. (Franklin, famously, said those who make such a tradeoff “deserve neither Liberty nor Safety.”)

The White House review group, a federal judge, and independent experts agree: the NSA’s mass call records program invades legitimate privacy interests, and it does not work. Even the government tacitly admits this latter point: having claimed that the program foiled 54 attacks in June of 2013, as of last week the NSA has resigned itself to describing the program as an “insurance policy.” (When asked about the program in December, even Obama could not identify a single thwarted attack.)

By contrast, like a nightmarish version of the Associated Press call records subpoena, bulk data collection of this sort could easily link journalists with their sources, as Foreign Policy pointed out in September.

The White House review group urged strict curbs on bulk data collection more broadly, recommending that it be “narrowly tailored to serve an important government interest,” and subject to senior policy review. This is crucial, as there are many ways in which even “non-content” metadata can constitute extraordinarily revealing surveillance.

Finally, it is important to note that the review group suggested mandatory data retention by private parties as a possible alternative to the current paradigm, a suggestion Obama floated in a recent press conference. This “solution,” while somewhat better than unfettered government access to communications records, is dangerous and should be rejected.

Transparency is fundamental to reform. Just as the public would not know about the extent of the NSA’s spying but for Edward Snowden, the FBI’s COINTELPRO dirty tricks but for a group of idealistic burglars, or the secret history of the Vietnam War but for whistleblower Daniel Ellsberg, many of the most egregious abuses will likely only come to light when sources share information with reporters. Nonetheless, the government serves both the public and its own interests by showing that it is operating openly and in good faith to the greatest extent possible.

The review group’s recommendations to enhance transparency include: reforming “gag orders” placed on the recipients of national security orders; lifting restrictions on the publication of general information about secret data-production orders by third-party recipients such as ICT companies; increased reporting of similar statistics by the government; and a shift away from secret programs and law. As James Madison observed, “A popular Government, without popular information, or the means of acquiring it, is but a Prologue to a Farce or a Tragedy; or, perhaps both.”

At present, the gathering of information on non-U.S. persons located outside of the U.S. is subject to very little oversight. As NSA Director Gen. Keith Alexander is reportedly known to say, the agency prefers to “collect it all.” Although data collection on U.S. persons is subject to more restrictions, the NSA nonetheless searches vast amounts of Americans’ private information. This “incidentally” collected information can be stored for years — in some cases indefinitely — and can also be shared with law enforcement.

The changes proposed by the review group would serve journalists by eliminating many of the “back doors” the NSA uses to get around restrictions that would prevent it from spying on reporters in the U.S., which the agency did during the Cold War and is alleged to have done more recently. Specifically, the recommendations would require that incidentally-acquired information about U.S. persons must be purged immediately unless it has foreign intelligence value or is necessary to prevent “serious harm” to others; information obtained about a U.S. person could not be used in any proceeding against him or her; and data collected could not be searched to identify U.S. persons unless necessary to prevent death or serious bodily harm, or based on a probable cause warrant that the person is planning or engaged in acts of international terrorism.

Non-U.S. persons would also see major privacy gains, including restrictions on the purpose for which surveillance may be conducted, as well as the extension of certain statutory protections. Though less robust, the reforms would provide significant additional oversight and privacy checks both before and after information could be gathered on international journalists.

Edward Snowden was quoted in The New York Times last year as stating, “unencrypted journalist-source communication is unforgivably reckless.” Encryption is vital for journalists, as it represents the kind of preparedness that might even make the difference between freedom and incarceration, or life and death. Yet the NSA has engaged in efforts — reportedly ranging from bribery, to hacking, to the perversion of technical standards-setting processes — all to undermine encryption standards.

It is clear that the White House review group members recognize the turning point at which the world finds itself. Rather than allow the U.S. to hurtle toward global Hobbesian cyber-anarchy, the review group recommends the U.S. lead by moral example.

The most important of its recommendations include a policy of addressing, not exploiting, so-called “Zero-Day,” or undiscovered, vulnerabilities, other than in rare circumstances subject to high-level, interagency review. Secure, reliable digital tools are necessary if journalists are to do their jobs, which necessarily includes handling sensitive information.

Additionally, as CPJ has documented, and as the review group notes, efforts to place Internet resources under localized government control threaten the open nature of the Internet itself. This openness is vital to the free flow of journalism and other information; once lost, it may be irretrievable.

In October, CPJ issued a special report on press freedom in the U.S. — the first such report in our 33-year history — which found Obama’s record on press freedom to be dismal. If he is concerned about his legacy as he puts the finishing touches on Friday’s remarks, perhaps he will be mindful of the words of his one-time colleague, Geoffrey R. Stone, who hired a young Obama to teach constitutional law at the University of Chicago. As Professor Stone, one of the White House review group members, wrote in his 2004 book chronicling more than 200 years of free speech in wartime,

It is, of course, much easier to look back on past crises and find our predecessors wanting than to make wise judgments when we ourselves are in the eye of the storm. But that challenge now falls to this generation of Americans … As Justice Louis Brandeis explained in 1927, “Those who won our independence … knew that … fear breeds repression” and that “courage is the secret of liberty.” Those are the two most central lessons for Americans to bear in mind.

This is a moment that calls for such courage.

One response to “Surveillance Puts Obama’s Legacy In Question”