Lessons from Justine Sacco’s Tweet Heard ‘Round the World 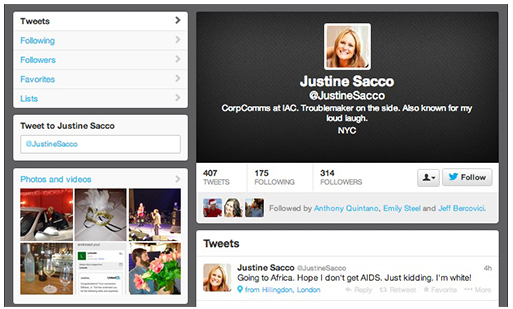 Social media mistakes fascinate me. That’s because, in part, the only people who don’t make them are folks who aren’t on social media.

Justine Sacco’s notorious tweet-heard-round-the-world seemed to corner the market on the sheer number of mistakes per word.

"Even otherwise smart, successful people can make some pretty big mistakes. And on social media, those mistakes are not easy to fix."

In case you missed it, she tweeted, apparently just before her international flight:

It appeared to insult an entire continent of 50+ countries, people with AIDS, African-Americans, white people, the medical community, the international travel business, people with an actual sense of humor, and more. Then came a huge social media backlash that ranged from funny to frightening, followed by cooler heads chastising the mob-like rush to judgment.

I believe her apology that she is in anguish over the tweet. Since social media gives us something new to learn every day, let’s count the “lessons learned” and move forward.

When I write social media policies for clients, the first rule is that you represent your employer and your community at all times, even with your personal accounts. Any work-related guidance covering your behavior also applies to social media. People will take your posts at face value – in this case, in black and white. Instead of being viewed as “shockingly insensitive” or “highly questionable,” it was reported and shared as “racist,” pure and simple.

Don’t screw up on a slow news week

Some wondered why a tweet from someone with only a few hundred followers created such an uproar, and questioned whether her employers’ competitors blew it out of proportion. I can’t address what the competition was thinking, but the number of groups it offended tapped a pretty big audience. And since it was the week before Christmas, a lot of news sites may have had more space to fill than content. Plus, the fact that she’s in PR for a media giant that owns several of the biggest online brands added irony — always a popular peg for a story — and raised the issue of her competence to hold that job during a time when so many people are looking for work. Finally, many PR people who just plain couldn’t believe what they were seeing, and the fact that she had a history of tasteless tweets that apparently went unchallenged, shared it many times on many platforms.

Jeff Bercovici at Forbes, who knows Sacco, wrote that she’s not a bad person, she’s just bad at Twitter. A few weeks before, she told him that the more outrageous the tweet, the more response it got.

In business, the people who set the budgets want numbers to show that the time and resources spent on social media are worth it. Because of the nature of the beast, the only spreadsheet-able facts most people can produce are the number of followers, tweets, retweets, etc. A TV news director in Atlanta recently said she uses Klout scores to decide who to hire.

But in trying to attract followers or increase influence, don’t get so close to the edge that you fall over it, or numbers may skyrocket for the wrong reasons.

When email was new, people realized that without facial expressions and inflection, quickly written words could be taken the opposite of how they were intended. Now we have so many emoticons that you can sometimes communicate without text at all. And many a Twitter hashtag reinforces intended, sometimes sarcastic, meaning.

If there were a real joke in there somewhere, it had more shock than value. If a writer pitched it as a gag for Jon Stewart or The Colbert Report, would it be taken as more sarcastic than caustic? Who knows…

Don’t drink and Tweet, and avoid FUI (Facebooking Under the Influence)

In the past, Sacco posted, “I can’t be fired for things I say when intoxicated, right?” Let’s say Twitter is the world’s biggest office party, with a studio audience. So yeah, you probably could. There’s no telling whether she’d “had a few” before the infamous tweet, but it would explain a lot.

Every minute — and hour — that ticked by without a response while she was unavailable on a transatlantic flight made things worse, the way each full point on the Richter scale for earthquakes increases exponentially. They say dogs age by seven years during every one people year. If Twitter Time were only measured in dog years, we’d be in good shape. In a crisis, time is not on your side.

Apologize. And mean it!

A few years ago I met someone who had been publicly embarrassed over a poorly thought-out tweet. He’d never addressed it publicly, but after talking to him for just a few minutes I finally had enough perspective to see where he was coming from.

I doubt I’ll ever meet Sacco, but she apparently knows now that she was insensitive. She’s lost her job and possibly her career. And that’s probably the biggest lesson — and one to remember going forward. Even otherwise smart, successful people can make some pretty big mistakes. And on social media, those mistakes are not easy to fix.