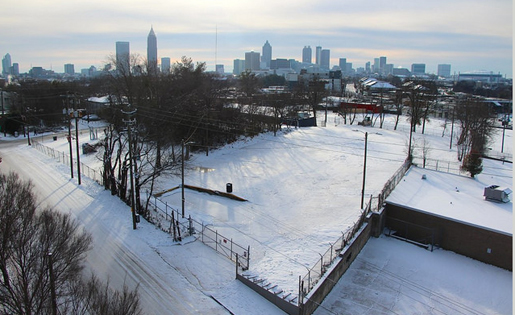 A view of Atlanta on Wednesday morning, photographed by Andrew D. Miller on Flickr Creative Commons.

Atlanta gets pretty hot in the summer, so people call it “Hotlanta.” But this week it’s more like Hoth — the ice planet from “Star Wars.” And so the hashtag “#Hothlanta” started trending. (A similar thing happened in the 2011 storm with its own #Hothlanta Flickr group.)

The sky was clear that morning — no gray clouds — but the forecast of snow was pretty clear too. I told a non-profit I work with that I couldn’t make a noon meeting. The first snowflakes fell shortly after noon Tuesday — right on schedule — bringing  the usual excitement that it might stick and be deep enough for sledding, plus the classic “Atlantans can’t drive in snow” jokes. I know — I’m an Atlanta native; I love finding a hill big enough to sled down every three or four years, and I’ve been making those bad driver jokes all my life. So I was safely in the home office when everybody else left work and school after lunch at the same time. Traffic backed up, ice formed underneath their tires on gridlocked roads, and suddenly it wasn’t funny anymore.

“It is important no one thinks there is some selfish motive involved in this as it might cloud the whole thing. Simply Pay It Forward please." -Michelle Sollicito

The map of Atlanta traffic at 10 p.m. Tuesday.

There were thousands of wrecks. People ran out of gas and abandoned vehicles while trucks and buses jackknifed, blocking major interstates and surface roads. Commuters were stranded without food, water and medicine for hours. Hundreds of children had what dedicated teachers did their best to turn into an overnight “snowcation” at school when it became clear that parents couldn’t reach them. More than 100 buses filled with kids from several school districts were stuck on the road into Wednesday. My son’s school district was one of only two where at least some students weren’t either stuck on buses or sleeping at school overnight.

People from every part of town clamored for help on dying cell phone batteries, but emergency workers could reach only a few. Luckily, one law enforcement officer was able to reach an expectant mother on I-285 and safely help deliver her child. But some first responders that intended to help, including ambulances, got stuck as well. A screenshot of a Google traffic map from 10 p.m. looked like a drawing of the circulatory system — except that nothing was circulating at all. A few of my friends made it home that night — some were on the road well into the morning.

SnowedOutAtlanta Page to the Rescue

But thanks to social media, people opened their homes and hearts. The biggest contribution, undisputedly, was a Facebook group called SnowedOutAtlanta. It listed shelters and posted maps and comments to help people find each other and provide help. When a friend linked to it Tuesday night, it brought a ray of hope not just to me, but to thousands of people trying to find or help loved ones.

Facebook user Michelle Sollicito says she launched the page because she was able to connect one friend with the husband of another who needed help. I — and thousands of other Georgians — watched the page and shared posts to try to use our six degrees of separation to help others.

“I thought, hmmm, people need to get in touch with each other to be able to help each other, so I set up a group to do that, and it just snowballed from there,” she explained in a phone interview with TV station Fox5 Atlanta.

Within one day, the group had more than 50,000 members. When Facebook told her it was getting too big to handle, she started separate pages for specific parts of town. Drivers reached out to others nearby who were out of gas — and therefore heat. People who lived near gridlocked roads headed out in SUVs and 4-wheel-drives — even on foot — to deliver food, diapers and blankets. They gave rides to the elderly, pregnant women, families with children, and people with medical conditions including cancer. Some made several trips.

Heart-wrenching posts by family members asked for help for parents, small children and others who would be otherwise unreachable. People (including me) helped spread the word that help was needed. Requests are still coming in as I write this, but many posts are being resolved.

Soon, in addition to requests for help, the page hosted expressions of gratitude. “Thank you Michelle Sollicito……because of your facebook group I just got home safely thanks to some nice strangers I met in your group,” a woman named Keeya Milner posted on the main SnowedOutAtlanta Facebook page. “I was stranded in Buckhead for over 24 hrs and I’m pregnant and had a child at home. God bless you!!!!!”

“There were hundreds of people who were helped, and lives were saved because of this woman’s quick thinking,” a woman named Kim Lostetter posted, asking the new media to take note of Sollicito’s work. “She truly brought a community together and the people showed an amazing spirit for their generosity … This has been one of the most amazing experiences I have ever been a part of and it makes me proud to call Georgia my home.”

“Because of the group you created I was able to help a family member who had been stuck in traffic for hours,” someone in New York posted on the page Tuesday night. “God bless you and everyone who has participated in this group this evening, and those who have extended their hands, opened their hearts and homes. It shows that love really does conquer all things.”

A grandmother posted her thanks for helping her son and his family find shelter. “Nothing warms a Nana’s heart more then getting a picture of a 2 year old sleeping grandchild on the cafeteria bench!!! You are my hero!!!!!”

‘I’m Not a Superhero’

Early Wednesday afternoon, a little over 24 hours from the start of the snowfall, Sollicito let group members know not to trust anyone who claimed to be collecting money on her behalf. “It is important no one thinks there is some selfish motive involved in this as it might cloud the whole thing,” she posted on her Facebook profile. “Simply Pay It Forward please.”

Last night she uploaded a video to YouTube summing up her thoughts and motivations.

“There were school buses that were missing and mothers desperate to find their children on those school buses, and it was a very emotional day,” Sollicito said.

“I’m not a superhero,” she said. “I couldn’t have done it without everybody else and it’s just basically showing the power of social media and the power of Facebook to help people, and it’s so nice to see Facebook used in such a positive way, and to see how many people’s lives we’ve made a difference to.”

A petition on the White House website to commend Sollicito jumped from one signature to hundreds in just a few hours, and is doubtlessly growing even now. Needless to say, there may be things Atlantans don’t know, but there’s one thing they do know — how to look out for each other. All we needed was vision, and social media.