How Data Journalism Can Play a Role in a Divided Venezuela 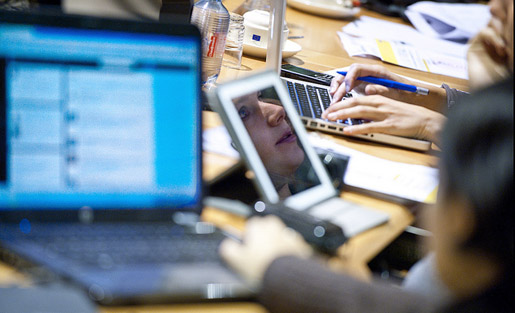 Image courtesy of the European Parliament and used here under the Creative Commons license.

In a country split by political polarization, what role can journalism and the use of data play in improving the quality of debate in the public interest?

This is an important question in Venezuela, a country in which President Nicolás Maduro claims to speak to the late President Hugo Chavez’s spirit through a “little bird” and has created a Ministry of Ultimate Bliss. Meanwhile, the most extreme opposition party burns Cuban flags and labels the president a new “Pinochet.”

Data journalism can play an important role there. It can provide new technological capabilities to journalists, programmers and designers, providing greater support for the facts and redefining how people in news work both collectively and individually.

Those were my takeaways from the first-ever Data Journalism Bootcamp in Venezuela in Caracas. About 100 professionals, chosen from 250 applicants, attended the three-day camp.

Widespread interest in the event can be explained by the need of applicants and participants to accelerate their skills and technological capabilities in using data and to integrate interdisciplinary work methodologies into their daily routines.

I helped organize the boot camp as part of my ICFJ Knight International Journalism Fellowship. The event was supported by the Carter Center Venezuela and the Institute of Press and Society (IPYS). It also had the unprecedented support of the country’s mainstream media organizations, including Bloque de Armas, Unión Radio, Panorama, Cadena Capriles, Globovisión and Banesco.

The intensive Bootcamp program covered all of these aspects. In more detail, it included an introduction to data journalism; a workshop on basic scraping using Google Spreadsheets, Scrape Similar and Fusion Tables taught by Juan Eduardo Hernández (chief developer of Poderopedia); a master class by Caracas academic María-Esther Vidal on Open Data in Venezuela and what Venezuela needs in order to advance in the field; an introductory workshop on data visualization by Alastair Dant (programmer at the New York Times and former interactive team leader at The Guardian); an inspiring chat about visual narration by interactive designer and ICFJ Knight International Journalism Fellow Mariana Santos, which started with a dance session. (Yes, dance.)

There was also a mini hackathon. Attendees proposed projects and became familiar, for the first time in their professional lives, with rapid prototyping techniques, visual thinking and tech entrepreneurship concepts like elevator pitches, minimum viable products and agile work organization. The 40 ideas proposed reflect the interest in using data to bring transparency to many of the current complexities in Venezuela. (You can check them all out on the event’s dashboard.) Of these, 10 projects were brought to life, using tools like:

Among the noteworthy projects were “Camino al 8D,” a chart and comparative timeline of ratings and mayors elected in Venezuelan elections from 2000 to the present. This project, created ahead of Venezuela’s municipal elections December 8, used a public database to plot the curves of growth and decrease in the number of votes for the official party versus the opposition party.

Another successful project, focused on baseball, the national sport of Venezuela, was “Chamos Peloteros” from the programming team of Cadena Capriles media group. The project extracted a database of information about Venezuelan players in minor league baseball in the United States and explored their demographic characteristics, such as average age, place of origin in Venezuela, signing bonus amount and the positions they play.

Thanks to the practice they received at the bootcamp, Cadena Capriles chief web developer Asdrubal Chirinos said, his team won the Venezuelan version of America’s Datafest and will advance to the global competition. (Review the pitch here.)

Other groups created projects that scraped and visualized the “migration of footballers”; made a map of marriage equality in Latin America; and revealed which models are the most-stolen motorcycles in Venezuela.

There were those who used the bootcamp to organize large databases, such as the thousands of unionized journalists at the country’s College of Journalists. Others used featured tools to perform basic prototypes that they’ll continue using in their jobs, to reveal patterns and connections in subjects like the influence of the Monsanto Corporation in Latin America; radiation therapy; the Bolivarian Armed Forces and Venezuelan migration.

The heart of the boot camp, according to the results of a survey sent to participants (in which the majority indicated that the activity “Exceeded their expectations”) was learning to work in interdisciplinary teams, learning new tools and developing an understanding of how to use large data sets to investigate and tell news stories, under the journalism aphorism, “If your mother tells you she loves you, check it out.”

During the present moment in the political life of Venezuela, “truth” seems to be the first victim of polarization. This polarization has permeated many areas of debate and analysis with concepts such as “economic war.” Into this atmosphere, the boot camp has served to promote and emphasize research techniques based on empirical verification of data and the practice of quality journalism.

Who is telling the truth? How do we check? What distinguishes the truth of an opinion coming from the highest echelons of power or a statement dressed in fact collected from gossiping opponents? How do we deal with opinions stated as fact and insist upon hard and verifiable data? These were open questions discussed during the meeting. This was especially true on the third day of the meeting, when a smaller group of professionals from the world of investigative journalism analyzed the legal limitations to the free exercise of journalism and learned in detail how to use Poderopedia to map the connections of the political and business elite in Venezuela.

Based on the interest we’ve encountered in the platform in Venezuela, we plan to launch a Poderopedia chapter in the country in the coming months.

Another great outcome of the bootcamp was an investigation into the companies authorized by the Venezuelan government to exchange bolivars to dollars in order to buy products for import into Venezuela.

Journalists in Venezuela frequently consult the government’s documents on how many bolivars a company has been allowed to exchange to dollars by CADIVI (Venezuelan Foreign Exchange Administration Commission, which is responsible for exchange control). But no one had yet taken a comprehensive look at which are the top 20 companies authorized to accept dollars and exactly how much money they are receiving.

Using what he learned at the boot camp, journalist Cesar Batiz took a hard copy of the file and turned it into a searchable database. With the help of María Esther Vidal, a professor at Simón Bolívar University, he made a ranking of the list of companies approved by the CADIVI to exchange bolivars to dollars over the limit permitted by the authorities. The investigation, published in the newspaper Últimas Noticias, highlighted the case of Tiendas Daka, a retail company the government has accused of illegally marking up the prices of imported appliances.

The investigation revealed the names of the company’s owners, information about its operations in Panama, as well as its electoral [official] address in Venezuela. The company was also among the top 20 companies that received U.S. dollars.

Thanks to the tools Batiz acquired at the boot camp, an important economic story is being told and new ways of getting answers from data are being used to reveal potential corruption to the Venezuelan public. I look forward to hearing about and sharing how other journalists are using their new skills in the months to come.

This post was originally written in Spanish and translated into English by Jessica Weiss.