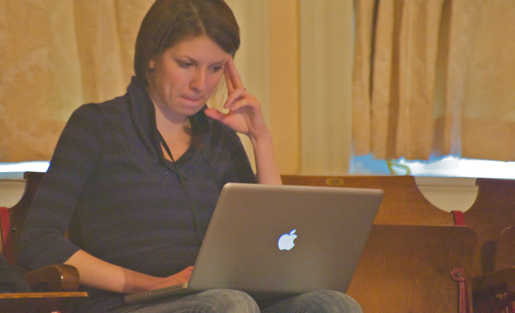 The news industry has been calling upon the savviest techies in the world to help make sense of how the explosion of digital technology is impacting the news business. Coders, programmers and data scientists are forging innovative ways of gathering, distributing and paying for news coverage.

But most of the technologists and tech-savvy journalists shaking things up in the news industry are men.

“When a large proportion of a company’s users or customers are female, it only makes sense to have a balanced demographic [within the company] that creates and caters to them." - ZeShaan Shamsi, BBC Television.

In part, this is because women are underrepresented in technology in general. Women make up just a quarter of the tech workforce in the United States and only 17 percent in Britain. In Africa, where women form a majority of the population and half of the overall workforce, they fill only about 15 percent of the tech jobs.

Forget the image of a lone-wolf reporter. Today’s most engaging and interactive journalism is created by teams.

Irene Ros, an open source JavaScript developer at Bocoup in Boston, believes wholeheartedly in a team-oriented approach to solving problems, including problems with code. And in her experience, the more perspectives and skills that make up a team, the better.

“A diverse group of people bring a diverse set of opinions and approaches to any task,” Ros told IJNet. “The harder the task, the more a group will benefit from that diversity.”

Having a diverse workforce is good for the bottom line and for customer satisfaction, says ZeShaan Shamsi, a senior recruiter at BBC Television.

“When a large proportion of a company’s users or customers are female,” Shamsi says, “it only makes sense to have a balanced demographic [within the company] that creates and caters to them.”

Tech is the next frontier

In 2013, the world’s most valuable company is a tech company: Apple. Technology is not only one of the world’s fastest growing industries — directly creating millions of jobs — but it is also a catalyst of social and economic development. According to the World Economic Forum, more people today have access to a mobile phone than to clean water or the electrical grid.

“Instead of looking at this stuff as something mathematical, if you see [the tech space] as the next frontier, women need to get involved now,” says Nicola Hughes, a data journalist at The Times in London and a 2012 Knight-Mozilla OpenNews Fellow. “In terms of a global democracy and freedom on the web, we will only have power with diversity.”

Across the developing world, nearly 25 percent fewer women than men have access to the Internet, and the gender gap soars to nearly 45 percent in regions such as sub-Saharan Africa, according to the Intel Corporation’s January “Women and the Web” report.

At India’s top engineering colleges, the entering class includes about 10 percent women every year. Anika Gupta, product manager for Citizen Journalist Digital at Cable News Network-Indian Broadcasting Network in New Delhi, says having more women in technology in India would address the fundamental imbalance of power between men and women and increase awareness of the problems that Indian women face that could be solved through innovation.

“Because tech jobs are lucrative and high-profile, having more women in these types of jobs will change the mindset that women can’t or shouldn’t work outside the home and alongside men,” Gupta says. “And it will provide role models for young women who want to pursue really demanding careers.”

One response to “Why Newsrooms Need More Women in Technology Roles”