Learn How to Become a Data Journalist with MOOC, Handbook from EJC 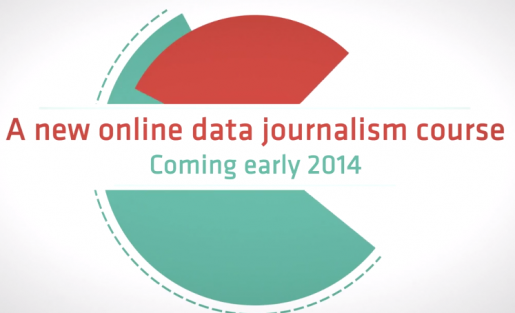 To help journalists to acquire these abilities, last month the European Journalism Centre announced its first MOOC (massive open online course) on data journalism. The course aims to give participants the essential concepts, techniques and skills to effectively work with data and produce compelling stories under tight deadlines, and is open to anyone in the world with an Internet connection who wants to tell stories with data.

The announcement was met with much excitement. Now, more than three weeks later, over 6,000 participants are signed up for the course. Almost half of those who have registered are journalists, and others include communications professionals, programmers, graphic designers and statisticians. So far, we have had course registrations from more than 170 countries all over the world — from Afghanistan to Albania, Bangladesh to Botswana, Cambodia to Cameroon. Registration is still open, and if you’re interested in joining, you can sign up here.

learn from the best

We want to give journalists interested in learning these much-demanded data skills the opportunity to learn from the best in the business, so we have assembled a group of course instructors and advisers from leading outlets and journalism schools, including the Walter Cronkite School of Journalism, the New York Times, ProPublica, Wired, Twitter, La Nacion Argentina, the Chronicle of Higher Education, Zeit Online, and others. The selection of instructors and advisers from four continents was also guided by the desire to create a course that is useful to journalists from any part of the world by recognizing the differences between media environments in different countries in our materials.

Given the large number of countries where course participants conduct their work, ensuring that the materials will be useful in these different contexts and keeping participants engaged in the course are two of the challenges that we expect to face. One of the ways in which we plan to address these challenges is by releasing the materials of this course under a Creative Commons license and by encouraging journalism schools and training organizations to use, adapt and integrate them in their own training programs and curricula. (If you’re interested to work with us on this, please do get in touch at [email protected])

The course has been inspired by and builds upon another resource that we produced together with the Open Knowledge Foundation last year — the Data Journalism Handbook. The handbook captures and translates the experience and expertise of over 70 of data journalism’s leading advocates and best practitioners in a collection of tips, techniques, stories from the field, case studies and tutorials. The book takes the reader through data journalism operations in various newsrooms around the world and through all the steps of the data journalism workflow, from getting data, to understanding it and presenting data stories to the public. Authors include experts from the New York Times, the Australian Broadcasting Corporation, the BBC, the Chicago Tribune, Deutsche Welle, the Guardian, the Financial Times, La Nacion, ProPublica, the Washington Post, the Texas Tribune, Zeit Online and many others.

One year and a half after its launch, the book is so far available in Spanish, Russian, French and Czech and translations in many other languages — including Chinese, Arabic, Portuguese, Georgian and Macedonian — are coming soon.

We hope that these resources will enable more journalists to use data in the service of journalism. As the practice of data journalism spreads around the world we also hope to see more collaboration on data-driven investigations across borders and the establishment of a global data journalism association, which would enable the exchange of datasets, experience and resources among journalists.

Liliana Bounegru (@bb_liliana) is editor of DataDrivenJournalism.net and project manager on data journalism at the European Journalism Centre (EJC). Her work at the EJC includes coordinating and co-editing The Data Journalism Handbook, coordinating the first edition of the Data Journalism Awards and running trainings and conferences. Liliana is also a researcher at the University of Amsterdam, where she works on the Digital Methods Initiative and on the collaborative project EMAPS (Electronic Maps to Assist Public Science), led by French sociologist of science and anthropologist Bruno Latour. She blogs at lilianabounegru.org

One response to “Learn How to Become a Data Journalist with MOOC, Handbook from EJC”