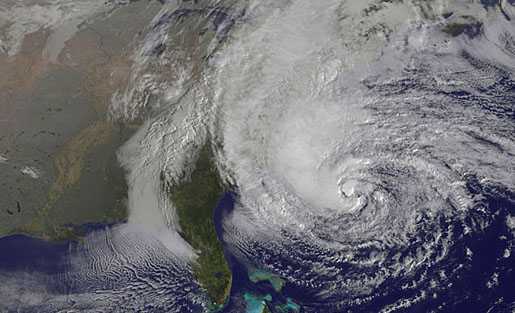 The wreckage of Superstorm Sandy, which a year ago blew through the East Coast of the United States, was not limited to the dozens of lives it took or the tens of billions in property damage it cost. Sandy also left behind a news media puzzling over how to provide sustained coverage of a complex, long-developing story like climate change, as well as of our society’s efforts to adapt to its impacts.

A local news experiment I’m working on is now attempting to figure out how that can be done. Digital platform AdaptNY is an attempt to combine deep curation and primary source documentation in order to encourage a fuller and smarter conversation about climate adaptation. We launched AdaptNY last spring at the City University of New York’s Graduate School of Journalism, where I am on the full-time faculty.

"AdaptNY came to life in the wake of the urgent need to prepare for future climate catastrophes."

The problem of sustained climate coverage with a public voice was not a new one to me. In fact, back in 2007 I won one of the first-ever Knight News Challenge grants for just that purpose — to create a citizen journalism-based climate change project, that time in Boulder, Colo., which had just passed the country’s first municipal carbon tax and we wanted to bring public input into how the money would be spent.

Many lessons were learned from that early experiment. But this time, the effort would be quite different. First, it would have to be on the bigger scale of a major metropolis. And second, it would come in the wake of Sandy’s destructive path, when it was clear that not only had the New York region encountered a natural catastrophe of historic proportion, but that given the realities of climate change (rising sea-level, higher risk of extreme weather, etc.), this might be just the first in a series of such threatening events.

It also became apparent at that time that New York Mayor Michael Bloomberg, who had long been proactive on the green front, such as with his 2007 PlaNYC initiative, was preparing a massive response to Sandy. What was less clear was how much of a community voice was being heard as the complex and expensive Bloomberg plan developed.

AdaptNY came to life in the wake of the urgent need to prepare for future climate catastrophes, and also conceived with the notion that input from community residents and other stakeholders in this critical process could be encouraged and captured using a series of experimental approaches in digital media.

AdaptNY started simply enough mid-spring, with extensive curation of the climate adaptation discussion via Twitter. I then launched a basic WordPress site in June, in time to provide deeper curational coverage of Mayor Michael Bloomberg’s 438-page report on how NYC could be made more resilient in the face of coming climate impacts. The report, which was offered in standard PDF form on the site, made more than 200 recommendations costing $19.5 billion. About the fanciest thing I did in those initial days was to work with a graphic designer to develop the site’s orange lifesaver logo.

Conceived as a one-person operation from its start, I kept the site and its social media platform highly focused on New York regional climate adaptation issues. In the course of daily curation work, our online followers were offered a diet heavy in social content drawn from searches, feeds and Twitter lists, with content ranging from straightforward link-heavy posts to Storify-fueled curation narratives. (Here’s an example.)

Given the highly curational approach, the site adopted a revolving front page: When curation was at its heaviest, I’d quickly switch to the use of a social front page, courtesy of the social curation tool RebelMouse. Then I’d switch back to a standard front page when I had our own content to feature.

In the first weeks, most of our original content came through a partnership and reprint agreement with news org Gotham Gazette, a pioneering online watchdog journalism platform here in New York. In return for their climate adaptation-related content, AdaptNY got front-page promotional space on the Gotham Gazette site, plus continuous sharing of our social media output.

That news partnership blossomed over the summer. AdaptNY led a full-blown investigative project together with Gotham Gazette’s editor and a top writer, plus a team of nearly a dozen past and current CUNY journalism students. Two months of research, surveying, dogged reporting and many late-night edit sessions yielded a multi-part special report that revealed evidence of a serious disconnect between City Hall and New York’s community boards (our most local level of governance) over how to plan for climate resilience.

The investigative package, which comprised four text pieces of some 10,000 words, plus interactive maps showing shifting flood zones in the city, and documenting the city-community disconnect, led the home page of both sites for most of the Oct. 21 week.

Most gratifying, however, was what happened to move the ball forward in the days following the AdaptNY investigation. In the wake of our reporting on community board criticism, City Hall announced it would reconvene two community advisory task forces on climate resilience and pledging “broad-based outreach” to some of the city’s hardest-hit neighborhoods as part of a Department of City Planning study.

Informing the conversation through reader annotation

Perhaps the most innovative, if still nascent, aspect of the AdaptNY project arose out of our desire to make the most of primary source documentation on climate change. We theorized that much of the often-poorly informed debate about climate could be improved if stakeholders had ready access to deeply researched, well-crafted reports on the subject. And we knew a big one was coming, in the form of a set of climate projections and policy recommendations from the Bloomberg administration.

But we wanted something more — not just an opportunity for our users to read the documents, but an opportunity for our users to rewrite them. To that end, we pursued a new partnership, this time with one of the premier developers in the world of primary source documentation online. DocumentCloud, a non-profit formed by staffers of ProPublica and the New York Times, has been used for the last several years by news organizations to internally annotate and organize documents and to publish them to the web.

What was new here was our desire to allow for public annotation tools. To foster public conversation around the soon-to-be-published Bloomberg climate change reports, we sought to use some of the same techniques already possible internally for DocumentCloud users for some time, but now for the first time available via social login to any reader.

DocumentCloud readily agreed to make us the test bed for this unique experiment. Working together over several months to develop the tool, we also hashed out use cases and possible follow-on improvements. By July, just a few weeks after the Bloomberg report hit, the DocumentCloud tool was ready. Our first experiment with it over the summer aimed at drawing in domain experts to comment on the massive document – in this case landscape architects with a large stake in how New York is to be rebuilt more resilient in the coming decades, and with a high comfort-level with technology.

In the end, our first trial was a bust. Despite a universal enthusiasm for the project on the part of these experts, their actual participation foundered on a combination of factors. Among the problems: what turned out to be the unrealistic expectation that as individuals they would weigh in on a voluminous document. Most, in the end, merely needed to scan it to look for opportunities, rather than to scour it for a policy critique. Also, good weather was our rival — many of our landscape architects spend summers working in the field, where their mobile devices are all but useless in accessing, reading or annotating such a huge report.

But undaunted, and still excited by the prospects of their still-unique tool, we’re taking a new approach that has already proven more successful. Rather than seeking out individuals, we’re using input from stakeholder organizations that have good reason to read the report thoroughly. Our first partner comes from within the vast CUNY system. CityAtlas, a unique, NY-centric web collaboration between the CUNY Insti­tute for Sus­tain­able Cities and Artist As Cit­i­zen, has just this week contributed some two dozen summary statements as annotations to the Bloomberg document, which we hope to disseminate in the coming days. Other, similar annotation partners are being sought as well.

A possible model for effective, efficient coverage of climate story

Looking ahead, the AdaptNY approach seems to have legs. Not only is the need in NYC still there as climate resilience mandates are handed off to a new mayor, following the end of Bloomberg’s long tenure this year, with the City Hall ready to spend billions and possibly remake much of the face of the city in preparing climate resilience. But nationwide, many communities are facing similar climate change-driven problems of coastal flooding or heatwaves, and having to consider adaptation and public planning processes too.

For AdaptNY, ongoing curation, additional original content with news partners and continued experimentation with reader annotation-driven conversation, is only the beginning. We’ve also got grant funding to bring together citizens in a guided workshop to look at the nexus of media and communities in fostering local news and information about climate adaptation, as well as for neighborhood-based resilience planning. We’re planning the workshop and related trainings for January in partnership with the Online News Association.

But more broadly, in the face of the climate challenge, we hope AdaptNY might serve as a model for how small local or university-based media can simply, quickly and inexpensively cover — in a way that involves community voices — what is shaping up to be the story of a generation.

A. Adam Glenn is editor of AdaptNY, associate professor at the CUNY Graduate School of Journalism, and a longtime digital journalist and media consultant. Connect with him on Facebook or LinkedIn, and follow his Twitter feed.