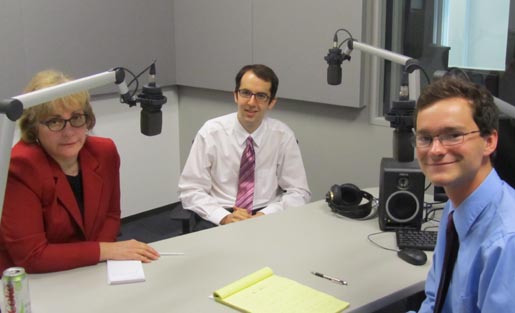 The Beacon’s Jo Mannies and Jason Rosenbaum (center) with St. Louis Public Radio’s Chris McDaniel during a taping of Politically Speaking. Photo courtesy of Beyond November.

Two non-profit news organizations in St. Louis are betting that a proposed merger will propel their revenue streams beyond the usual mix of memberships, grants and philanthropic gifts.

St. Louis Public Radio and the online-only St. Louis Beacon announced their intentions to merge last fall, and they hope to finalize the alliance in the coming months. The merger was a much-discussed topic recently at “Next Steps For Sustaining Journalism,” an event hosted by the Reynolds Journalism Institute at the University of Missouri. (Any merger must be approved by the university system’s board of curators, which owns St. Louis Public Radio.)

“Either organization separately would have to build out all these revenue streams as the way to a sustainable future...so doing it together just gives us a real head start in figuring that all out.” -Margie Freivogel

From a business model perspective, the angle I find most encouraging is the focus from both sides on generating more “earned” income from non-philanthropic sources, especially corporate sponsorships. Both news outlets have devoted followings, but both also realize that their long-term survival depends on earning new sources of financial support.

“Either organization separately would have to build out all these revenue streams as the way to a sustainable future,” said Margie Freivogel, the Beacon’s editor. “So doing it together just gives us a real head start in figuring that all out.”

Freivogel said St. Louis Public Radio’s large base of small donors (more than 5,000 contribute every month) nicely complements the Beacon’s roster of major donors (at least 20 of whom have donated at least $10,000). A consultant report last spring found there was little overlap between those donor bases. But that same report found the two organizations’ combined revenue from digital sponsorships — the non-profit equivalent of display advertising — was below $50,000, a missed opportunity that the consultants attribute to a lack of focus in that area.

Both sides are focusing on it now. Tim Eby, general manager of St. Louis Public Radio, said he has closely followed The Texas Tribune’s “aggressiveness without apology” in racking up revenue through events and corporate sponsorships, which generated more than $1.6 million for the Tribune last year.

Both the Beacon and SLPR have experience with events. But Eby and Freivogel said they hope the merger would spark an even more entrepreneurial approach toward corporate sponsorships and other sources of earned income.

“As we map out our future, we know that in the digital era, on-air pledge drives are not going to be as effective going forward,” Eby said.

The Tribune, by the way, has a content-sharing partnership with KUT, the local National Public Radio affiliate. That relationship, however, is far less extensive than the proposed alliance in St. Louis, which would effectively double the staff of each newsroom. J-Lab’s Jan Schaffer says it would be “the first time a public radio station with a staff of journalists has combined its operations with another daily-news producing outlet.”

On the air, St. Louis Public Radio must abide by Federal Communications Commission restrictions that govern corporate underwriting. Those rules don’t apply to digital platforms, but Eby said the merged organization would need to strike a balance between drumming up online sales while respecting the sensibilities of its audience.

“It’s that fine line you’ve got to walk,” Eby said. “I think there’s opportunity for us on the digital side. We’ve just got to find the sweet spot.”

One response to “St. Louis Merger Aims to Expand Revenue for Non-Profit News”