One Year Later, Medium Is Changing the Way Its Writers Write and Its Readers Read 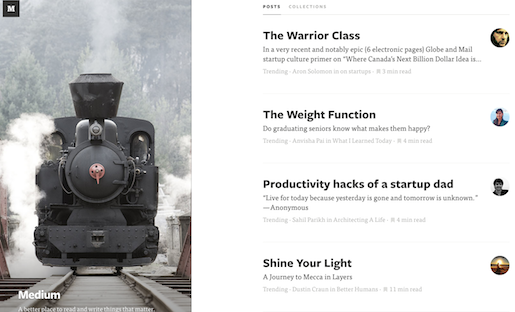 Medium, the publishing platform from Twitter founders Biz Stone and Ev Williams, is just more than a year old.

It was just more than a year ago that Ev Williams and Biz Stone created the publishing platform Medium.

The Internet officially met the site in August 2012, and since then, Medium’s popularity has grown enough for even the most skeptical media watchers to use the word “momentum.” Medium is still an enigma, however — in how it works (a mysterious algorithm “curates” stories for readers), in its business model, and in what it holds for the future of journalism.

"Part of Medium's allure is the fact that it encourages more online interaction and reflection, because there are times when a tweet is not enough."

But, as to Williams’ and Stone’s basic hope for the site — best described by the tagline: “A better place to read and write things that matter” — its readers and writers say it’s certainly changing things.

Blogger came from Williams’ company, Pyra Labs, in 1999. Seven years later, Twitter launched, and two of the three founders were Williams and Stone.

Now, the pair is focused on Medium. The site combines elements of their past projects, but remains in a league of its own.

Unlike Blogger, Medium is a collaborative space — posts are grouped together topically, creating a larger story. And compared to Twitter’s 140-character bursts of snark and commentary, Medium thoughtfully lends itself to long-form writing.

“We love tweets as much as the next person (probably more), but sometimes we long for something meatier,” wrote Williams in an introductory post.

Medium is certainly “meatier” — since its launch, the site has racked up a wide range of content from an even wider range of contributors. Though it’s still invite-only, Medium isn’t exclusive, and you don’t need to be a journalist to contribute.

Medium’s simplicity (the platform’s sleek interface is a far cry from other cluttered websites on the market) has drawn in writers of all kinds, from the occasional blogger to full-blown authors. Part of its allure is the fact that it encourages more online interaction and reflection, because there are times when a tweet is not enough.

Callie Schweitzer, director of digital innovation at TIME, has published three pieces for the site thus far. Each one has brought in a flurry of responses from readers and recommendations — Medium’s version of a favorite or like.

“I started writing for Medium because I was really interested in trying out a new platform,” Schweitzer wrote via email. “I was also looking for an outlet that let me have a longer conversation about the journalism and digital media ecosystems that I wasn’t having on Twitter, Facebook, or elsewhere.”

“You are what you share” was her first post for Medium, focused on how to be genuine online.

“I was really excited by the response it got,” Schweitzer wrote. “Specifically the emails people sent me, which felt like a much more engaging way to talk to readers than just a comment or an @ reply.”

Other writers are hesitant about Medium. Christina Warren, senior tech analyst at Mashable, has five drafts that she has yet to publish.

“Part of the reason I haven’t published to Medium is because I’m slightly intimidated. I know that is illogical and insane on the surface, but I feel intimidated and almost as if I have to rise to a higher standard on Medium,” Warren wrote via email.

Although Medium encourages contributors to write about anything, there is a standard to write up to: Editor’s Picks, a collection containing the best content on the site as determined by Medium’s staff team. These posts are highlighted on the homepage and shared across social networks, leading to quick web fame for the authors.

Of course, Medium isn’t meant to be a contest. Williams phrased it well when he wrote about the site’s intentions: “Medium is not about who you are or whom you know, but about what you have to say.”

These are the people that Medium learns about by using the top-secret algorithm designed to personalize the reading experience.

Few details are known about the formula that fuels the platform. Pete Davies, product scientist at Medium, said the team is constantly experimenting.

“We pay close attention to the time that people spend reading posts, together with how they scroll through them,” Davies wrote via email. “We think this can help us to understand how well a post resonates with a given user, and may be a better signal than the typical views/visits metrics that are generally used in online media.”

In an article for TechCrunch, Gregory Ferenstein put it like this: “Traditional news editors stake their reputations on having an intuition for what drives eyeballs to their sites. Editors don’t, however, know whether readers leave more informed.”

Medium’s algorithm seeks to change the history of consumption by adding up the amount of time users spend reading the posts. It’s more than page views and visits — it is a scientific approach that measures how we use the Internet. Medium knows which posts you’ve read and recommended, and with that information, it suggests new posts for you to check out.

“Medium’s new intelligent curator aims to improve the ol’ human-powered system of manually scrolling through the Internet and asking others what to read,” wrote Ferenstein.

A Better Place to Read and Write

At the heart of Medium is a sense of connectedness between those who create words and those who consume them, and the site’s future looks promising to technology experts like Warren.

“As a platform, I envision Medium becoming a curated magazine of sorts that lives digitally,” she wrote via email. “I think with a strong tablet app that is able to curate Medium’s content flipboard-style, the platform could actually also be a publication in its own right.”

For now, the site continues to guide readers through a consumptive experience unlike any other — and meanwhile, the writers are responsible for building up Medium’s content and shaping the site, post by post.

“We want to optimize for great interactions between writers and readers,” Davies wrote via email.

Melanie Stone is a journalism student at DePaul University in Chicago. Her work has appeared in several print publications and websites, including Crain’s Social, Huffington Post and The Daily Illini. Tweet her at @MelanieAlissa.

One response to “One Year Later, Medium Is Changing the Way Its Writers Write and Its Readers Read”