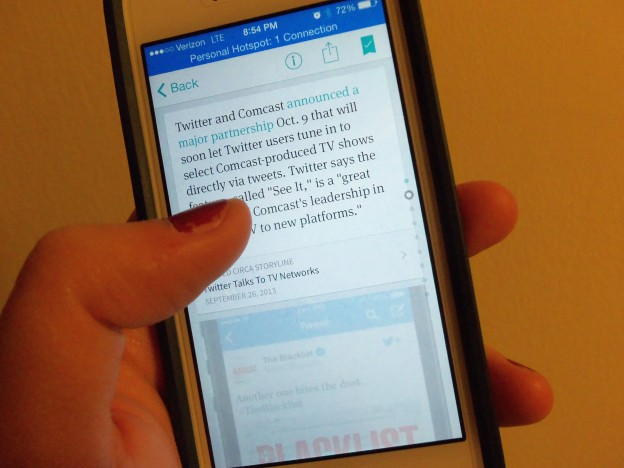 Circa News 2 breaks the top stories into atomized bits of news on placards that users scroll through on their phones. Photo by Paige Cooperstein.

Version two of the news app Circa launched earlier this month — on the same day as the Capitol Hill shooting. That turned out to be a good test of what the revamped app could do, said David Cohn, Circa’s co-founder and director of news.

On Circa, readers access the news as deconstructed, atomic parts including facts, quotes, photos and maps. The company has an editorial team of 12, scouring the news and breaking it down. They look everywhere from the BBC to Reuters to the New York Times, even incorporating tweets from the Iranian president. If users follow a story on the web, they can even see a list of articles the editorial team sourced to put together its atomized coverage.

"Circa is not an app company. We’re positioning ourselves as a news organization for the mobile lifestyle." -David Cohn

Since its early days, Circa has received a lot of attention and is backed by high-profile investors. (As TechCrunch’s Seth Fiegerman reports, Circa has raised $2.4 million to date.) As it evolved to Circa News 2, the app garnered even more attention for its integration of the desktop and mobile experience. Users can start following a story on one platform and pick it up from the same spot on the next. In addition to all that chatter, Circa news managed to hold onto a “Featured App” spot in both the App Store and Google Play store for weeks after its updated version launched on Oct. 3. Other updates to the app include a de-cluttered user interface as well as availability for the first time on the Android operating system.

David Cohn, director of news for Circa

I recently talked to Cohn about his strategy as director of news for the app and about the app’s updated system for pushing breaking news to users’ phones as a contextualized ranking. The following is an edited version of that discussion.

Can you tell us about what happened the day you launched Circa News 2?

David Cohn: The Capitol Hill shooting happened the day our app launched, and that was our first breaking news push. It took 11 days from the initial report until the time we reported a vigil at the burying of the woman involved in the Capitol Hill shooting. From the moment the story broke until the time the story came to a natural resting place, we had a relationship with that story and the readers. We don’t approach our readers as flyby eyeballs. We want them to follow the story.

How do you organize a story for mobile readers that’s different than other online news experiences?

Cohn: If you get breaking news in a push [notification on your phone], you just end up at a newspaper’s webpage with just a strip of a headline before the full story is actually written. Let’s take the Boston Marathon bombing as an example. First, the news went out: There was an explosion; it’s unknown how many were hurt. Every news organization pushes something to that effect. With Circa, people would follow a story. In the app, we keep track of what a person has or hasn’t read. As we get more information, we’ll push it to your phone. We can treat you with context from here on out. The Boston bombing coverage lasts all week long or more, so it’s up to the reader to follow it, and every story treats you like you’re brand new to the story. They all start with, “There was a bombing on this date and these brothers are suspected.” We know what you’ve already read on Circa, and we can build from there.

Our stories develop more contextually than chronologically. Once you’ve read that there was a bombing, you don’t need to read it again, so that information still hangs around your story thread, but it’s prioritized much lower. If you have three updates on your story thread since last time you checked Circa, those updates are prioritized based on importance more than time. We try and make it flow according to what you want to know about the story based on what you already know. It’s not a live blog.

Now the Circa app is available to Android users. What was that development process like?

Cohn: It was obviously something a lot of people requested. We hired an Android developer who’s been working on this for three or four months. The core of the app is the same [as on the iPhone]. We’re still breaking down the news. In the end, there’s slightly different features just because we tried to make it feel like a unique Android app and work with the Android vocabulary. You can flip left and right through the stories on the Android. Originally, we had a scrolling option within the iPhone where each atomic unit had its own card and no matter how much text we had, we made it take up the whole screen. But we experimented with making the card sizes fit the text. In the updated version, we highlight the point you’re on while the other units are grayed out until you scroll up to them. That was first tested on Android, and we got a great response so we translated that over to the iPhone experience. When you release an app in the App Store, Apple has to approve it. It’s a longer process to try something, get feedback, change it and resubmit it. With the Google Play store, the testing is quicker.

Circa redesigned the interface of its app. How different is version two from version one?

Cohn: There are some small subtle differences, but if you put version one and version two side by side the changes are stark. We made it a lot less cluttered primarily. We completely removed anything not part of the actual story. Before there was other metadata information in the story threads. We also flattened the design to match iOS 7 and made it all around more iOS 7 friendly. A lot of time, love and care went into the redesign to make it easier and friendlier to read.

What is the most important change between version one and version two?

Cohn: I think the most important change is not in the app itself, but just in the approach. Circa is not an app company. We’re positioning ourselves as a news organization for the mobile lifestyle. Even including things like Google Glass, we’re in a much better position to create content for those devices than any other guys because we started in the mobile language. For us, it’s not about an app, but the ability to think about the mobile news lifestyle.

What’s the response so far to the updated Circa app?

Cohn: We’ve seen a really great increase. The release came at a great time because a lot of people were buying new phones with the [iPhone] 5S and 5C coming out. It was also a boon for us to be a featured app in the App Store and Google Play store. But more important to me than gaining new followers is Circa’s retention rate. We have a history of retaining at least two times more users than other news apps, according to Flurry. If we can maintain that retention rate with our larger audience on the new iPhones and now the Android then we’re really in a good place.

What do you still want Circa to accomplish?

Cohn: We want to build out our desktop experience more, and we’re sort of seeing that already. If you go to the Circa Twitter account, our stories shared on Twitter have links that take you to the Web. It’s a very integrated experience so you can start following something on the Web, then pick it up on your phone or tablet. Again, we know what you’ve already read so we know what to add on the next device.

Paige Cooperstein is a MediaShift intern. She freelances as a culture reporter and has her master’s in arts journalism from the S.I. Newhouse School of Public Communications at Syracuse University. Paige has interned in New York City with Vanity Fair, and is fresh off covering the School of Art at Chautauqua Institution in Western New York. While not working, Paige holes herself up to watch marathon amounts of TV. She streamed seven years of Buffy the Vampire Slayer in two months.

One response to “David Cohn: Circa Goes Beyond App to Serve ‘Mobile News Lifestyle’”