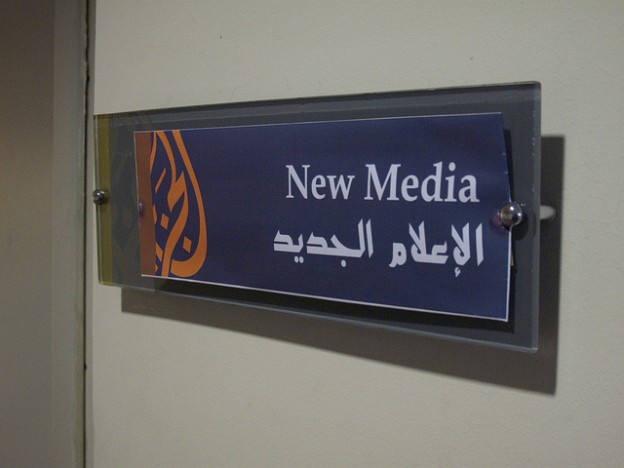 At the Al Jazeera broadcast center in Doha, Qatar. Photo by Paul Keller on Flickr and used here with Creative Commons license.

The German magazine Der Spiegel reported recently that the U.S. National Security Agency hacked into the internal communication system of Al Jazeera. If the report is accurate, the targeted hacking of a news organization represents an assault on press freedom qualitatively different from — and in many ways more disquieting than — the perils posed by pervasive, but unfocused, surveillance.

Details of the NSA’s alleged attack on Al Jazeera are sparse. Der Spiegel’s report relies on documents reportedly provided by former NSA contractor and whistleblower Edward Snowden. The weekly magazine said they do “not reveal to what extent the intelligence agency spied on journalists or managers of the media company, or whether the surveillance is ongoing.” The documents have not been made public.

"The decision [by the NSA] to compromise a news organization does enormous damage not only to the freedom of the press, but also to the integrity of the U.S."

However, what the available details do suggest is that the NSA successfully targeted the communications of a number of Al Jazeera’s sources — sources the news organization took pains to protect. This is not the first time it has been alleged that the NSA spied on a news organization: NSA whistleblower Russell Tice claimed in 2009 that the agency makes it a point to target journalists and news agencies. Al Jazeera News Director Ibrahim Hilal alleged in 2001 that the U.S. routinely monitored its communications between Kabul and Qatar, a charge U.S. officials denied.

The Difficulty of Defense Against NSA

The alarm about spying on journalists’ sources has been sounding for some time. We have also consistently shared best practices designed to militate against such threats via our own security guide, as well as through guides prepared by others.

With that said, if the NSA wants into your computer, it’s probably going to get in.

The newspaper said the documents show the NSA “has circumvented or cracked much of the encryption, or digital scrambling, that guards global commerce and banking systems, protects sensitive data like trade secrets and medical records, and automatically secures the e-mails, Web searches, Internet chats and phone calls of Americans and others around the world.”

Embedded in this reality, however, is an important principle: Because the U.S. commands such tremendous intelligence capabilities, it must take all the more seriously its obligation not to turn the machinery of government on those who gather and report the news. This principle is one with which the U.S. government would seemingly be familiar, as it has previously condemned hacking attempts by other countries, such as China, whose attacks on media companies are well-documented.

It is this disconnect that makes the NSA’s attack on Al Jazeera so disturbing, and so terribly disheartening. Whatever arguments may be made about the expediency of such exploits in the short term, the decision to compromise a news organization does enormous damage not only to the freedom of the press, but also to the integrity of the U.S. in the eyes of people at home and abroad.

Geoffrey King coordinates the Committee to Protect Journalists’ Internet and technology policy efforts. King, who is based in San Francisco, protects the rights of journalists through advocacy, public education, and engagement with policymakers worldwide. Prior to joining CPJ, King, an attorney by training, represented U.S.-based individuals in constitutional matters involving the freedoms of speech, press, and petition. King is also a documentary photographer whose work has focused on human rights and social movements. In addition to his work as an advocate and journalist, King teaches courses at UC Berkeley on digital privacy law and policy, as well as the intersection of media and social change. King holds a bachelor’s degree in Mass Communications, Phi Beta Kappa and with Highest Distinction, from UC Berkeley. He earned his law degree from Stanford Law School. His public GPG encryption key can be found here. Follow him on Twitter @CPJInternet