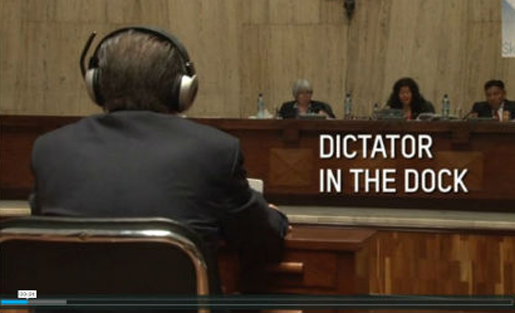 The producers of "Granito: How to Nail a Dictator" followed up with webisodes of President Ríos Montt's trial, where he was accused and convicted of committing genocide in Guatemala.

Webisodes, which have long been hyped as a new form of online entertainment (but rarely lived up to it), are expanding beyond Internet television and proving to be a valuable accompaniment to feature-length documentary films.

Whether webisodes are released before a film, as follow-up to a finished film, or as a standalone project, they are becoming a viable way of starting and continuing public discourse. Here are three ways filmmakers are utilizing webisodes.

Webisodes create a powerful tool to continue to engage and educate audiences when the story continues beyond the feature film.

Filmmaker Brigid Maher wants to flip the documentary model on its head by releasing webisodes before her feature film is released, not after, as tends to be the norm.

By pre-leasing the webisodes, she believes they can help creatively build the story, create outreach opportunities and connect with an audience particularly interested in the film’s topic.

Her film in production is “The Mama Sherpas,” which tells the story of midwifery in the United States, and her webisodes will be available (one per month for the entire year) on mybestbirth.com, a website started by Ricki Lake and Abby Epstien.

The webisodes are unique from one and other, telling a complete story in each segment. They use footage that is important in understanding the social issues raised in the film.

Maher is also finding that when subjects in her film are able to see the edited footage, they become less worried and more comfortable in front of the camera in future shoots.

While the pre-release of webisodes would make some filmmakers (and funders!) nervous about taking away from the impact of the final film, with the right subject and the right outlet, it is a unique and viable option that projects like Maher’s are proving to benefit from.

2. Continuing the Story After the Film

Skylight Pictures have produced and released two films on the genocide in Guatemala. The most recent, “Granito: How to Nail a Dictator,” premiered at Sundance in 2012.

The films recall the armed conflicts that took place over three decades with over 200,000 people murdered, displaced or disappeared and the State responsible for most of the cruelties. The conflict ended with a peace accord in 1996.

Fast-forward to the present, to the trial of de facto President Ríos Montt and General Mauricio Rodríguez Sánchez, which started on March 19, 2013, holding them responsible for the genocide.  Skylight Pictures has had access inside the courtroom and is posting short clips of the trials on their vimeo page under the title, “Dictator on the Dock.”

When the films were finished, justice had not yet been served to the Guatemalan people. By creating webisodes, the filmmakers are able to continue the story now as events unfold and in real time. Webisodes create a powerful tool to continue to engage and educate audiences when the story continues beyond the feature film.

Every now and then, it is in the best interest of a project to forgo the tenuous process of producing a feature film and instead to produce a series of webisodes.

In the case of Angela Tucker’s “Black Folk Don’t…”, short interview segments, produced solely for the web, was the best option.

Tucker and her team travel the United States and look at negative stereotypes in black culture by asking members of the community thought-provoking questions, all beginning with the phrase, “Black folk don’t.”

The web series that follows is provocative, insightful and often humorous. It makes a strong case that sometimes there is truth to why it’s assumed “black folk don’t go to the doctor, or do yoga” but also (as expected), many racial assumptions are in fact negative typecasts.

Tucker’s web series keeps people laughing and thinking, and is regularly updated with new segments and new interview questions to ensure audience’s come back for more.

This post originally appeared on the the site for the Center for Social Media at American University’s School of Communication.

Abigail is a media producer in Washington D.C. With a keen interest in the business of independent documentary filmmaker, Abigail gives astute attention to the partners and networks that surround film projects. She recently worked at the Center for Social Media at American University and is now a freelance producer.

One response to “3 Ways Documentary Filmmakers Are Making Webisodes Work”