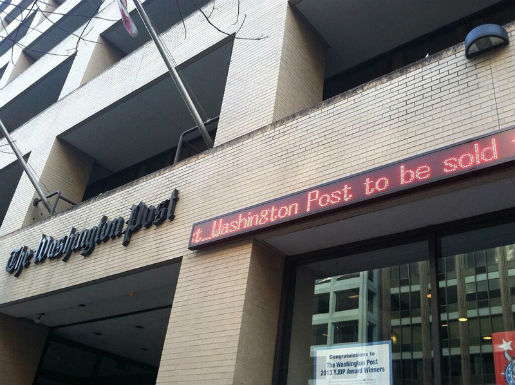 The Washington Post headquarters Aug. 5, featuring a ticker announcing its own sale to Amazon founder Jeff Bezos. Photo by Adam Glanzman and used here with a Creative Commons license.

D.C.’s hometown paper announced Aug. 5 that Jeff Bezos, founder of Amazon, bought the Washington Post and a number of other Post Co.-owned newspapers for $250 million. The Post has been controlled by the Graham family for 80 years. Here’s how journalists — at the Post and beyond — reacted to the news, as well as all the background on Bezos and his deal with the Grahams.

We’ll be updating the Storify over the next couple days as more news comes out, along with unique reactions. Check out these other stories about the sale on MediaShift and Idea Lab: