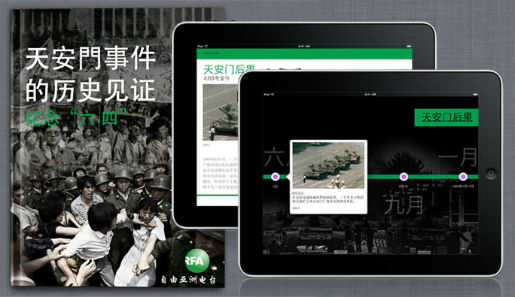 A new e-book by the Broadcasting Board of Governors and Radio Free Asia recounts the momentous 1989 events of Tiananmen Square, both in English and Mandarin.

E-books offer new channels for journalists to engage with an audience and tell great stories, whether it is with a serialized collection of text-based stories for small e-readers or an interactive audio/video/photo magazine for tablet devices.

On June 4, the 24th anniversary of the Tiananmen Square Massacre, Radio Free Asia (RFA) released an iBook of their own, recounting the 1989 protests in both Mandarin and English.

"A great editorial team must be paired with an excellent design team in order to turn previously published material into a meaningful new experience."

The heart of the book is an interactive timeline that allows the reader to navigate events chronologically, in addition to traditional chapter-based browsing.

Through the multimedia interface the viewer not only reads the narrative facts of events, but also experiences the sights and sounds of Beijing in the spring of 1989.

Here’s how it came to be.

As director of the Office of Digital & Design Innovation (ODDI) studio, I led the team that matched our creative and technical resources with RFA content and editorial resources. The two teams worked intensely and collaboratively over a three-month period.

Once an initial direction was decided and content was collected, the design and editorial team began to storyboard out what a book might look like. An interactive timeline was devised to anchor events in place and assist the reader in navigating the book.

The events of the spring of 1989 were also divided into five phases (The Protest Begins, The Politburo Splits, Tension Rises, Crackdown and Aftermath), each of which would constitute a chapter of the book and have its own section of timeline.

Decks of copy were needed to stitch the chapters together, along with an introduction and closing section. Video and photos needed to be at the higher qualities allowed on tablets. Chinese material needed to be translated to English and vice-versa.

At this point in the process, a diagram of Tiananmen was commissioned, as well as a map of central Beijing, since many of the actions happened in the surrounding area. Luckily, RFA had experienced editors who covered Tiananmen from the ground, including Dan Southerland, now executive editor of RFA but then China bureau chief from the Washington Post, and Feng Xiaoming, now the Mandarin service director of RFA who was a co-anchor for CCTV.

We used iBooks Author, as well as Adobe CS6 tools, to layout and create the book. Part of the power of iBooks Author is that it allows editors to quickly assemble an interactive publication with no coding and minimal graphic knowledge.

But this same functionality makes iBooks Author a mixed bag for graphic designers, since templates are more complex to adapt and change than one-off pages. We found that the existing templates were too generic.

Our designers created a set of branded templates to give all RFA iBooks a distinctive look. We also invested technical and design time to create the custom timeline.

The good news for designers is, once the template and custom graphics are done, a trained editor can make all the picky text corrections, changes and updates. This is a huge plus in a multilingual environment.

New devices create new challenges. While e-readers have been around for many years, tablet devices are relatively new. The iPad displays dozens of languages and a broad array of fonts, but iBook Author supports only a few languages in multi-touch format, and even fewer fonts. This currently results in real challenges in placing these native functioning books in iBook stores around the world. PDF and EPUB formats are more universally accepted, but far less functional.

The first rough draft that could be loaded on an iPad was a considerable milestone, since the entire team finally experienced how the book actually “felt.”

iBooks are meant to be experienced through multiple channels (and possibly in a nonlinear manner), and this working prototype generated a lot of crucial feedback on everything from how a slideshow was styled and how videos launched, to the size of touch targets on the timeline.

Tucked inside a phone, or concealed on a USB stick, e-books allow articulate, immersive, longform journalism to get around restricted Web environments and across closed borders. This trait is a very significant one for the BBG news entities.

What we have learned

A great editorial team must be paired with an excellent design team in order to turn previously published material into a meaningful new experience.

With all the multimedia components, an iBook is still a book, and good copywriting is a must. Edits need to be made to archival material to trim away elements that, with the passage of time, have become less relevant.

Readers expect high-quality graphics, interactive elements, video and audio to yield an immersive storytelling experience. It is also crucial to take advantage of the native storytelling and navigation attributes of any particular device, and to do this you will have to prepare different editions of the same book for various platforms.

“Remembering Tiananmen” represents the first foray for BBG into the iBook world of interactive storytelling. The Chinese edition is aimed at an audience that was not even born when these events happened, and because of censorship, may not have any idea that the turmoil of 1989 ever took place.

Will this iBook change anyone’s life? Possibly not, but it may start some very interesting conversations.

Steven Fuchs is the studio manager for UX and design with the Office of Digital & Design Innovation at the Broadcasting Board of Governors. He is a specialist in international design and user experience. His team is currently focused on exploring and developing emerging storytelling tools for journalists. A fine artist as well as a graphic designer, Fuchs’ drawings and paintings been displayed in numerous galleries and institutions in the Washington, D.C. area.