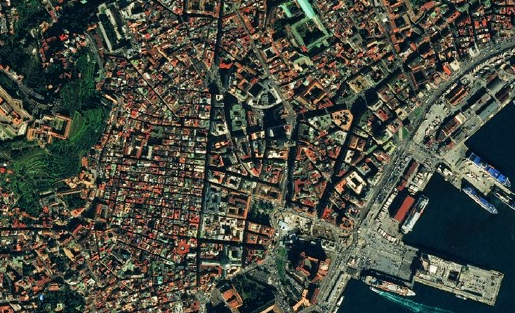 Timely images of a situation add a lot of context to the story, from showing flooding to capturing political demonstrations, to seeing deforestation. What if you could get imagery from a satellite, of any event, anywhere in the world, in real time? Traditionally this is not just expensive — imagery is really hard to process and publish on the web. This is now changing because of open-source tools and the media partnership we are launching as part of MapBox Satellite Live. Working with the major satellite companies we are building open-source tools to go from space to your map story really quickly.

Any point on Earth, everyday, with 50cm resolution

We are publishing all of our documentation in the open, like our last blog post about working with the super sharp European Satellite Pléiades. It’s amazing imagery. Pléiades is a constellation of two identical high-res satellites 1A and 1B on the same heliosynchronous orbit on opposite sides. This basically mean that Astrium, Europe’s leading space technology company, can capture any point on Earth in less than 24 hours, always at similar illumination angles. Their imager can produce a 20km ground footprint at nadir with 50cm resolution (2 meter Blue, Green, Red, Near Infrared and 0.5 meter panchromatic). Using open-source tools, you can publish this data on Mapbox in minutes.

"What if you could get imagery from a satellite, of any event, anywhere in the world, in real time?"

Astrium has set up an impressive service with Pléiades. Uplink stations can schedule acquisition up to three times per day. Satellites can rotate to maximize pointing opportunities with each pass. Downlink stations can collect up 1 million sq. km per day, per satellite. The processing pipeline can then create calibrated and orthorectified images in just 30 minutes. With the instructions of this guide you can have an online map like this one in minutes:

Head over to our blog for the step-by-step instructions, or check out the guides from other satellites, like RapidEye or Landsat 8 from NASA. Let me know if you have any questions on Twitter, [@brunosan]. And if you make a cool map, tweet [@MapBox] and have us send you a cool satellite sticker.

Bruno Sánchez-Andrade Nuño is the Chief Scientist at MapBox. He is a key part of the Satellite team with Chris Herwig and Charlie Lloyd and plays a major role on our big data projects across the company. Bruno has a PhD in Astrophysics from the Max Planck Research School. He has worked with NASA satellites and space rockets at the U.S. Naval Research Laboratory, and on Science and Technology Policy at the National Academies.

One response to “MapBox Satellite Live: Sharp Images From Space to Your Map Story. Fast.”