No Change? Jeff Bezos Will Turn the Washington Post Upside Down 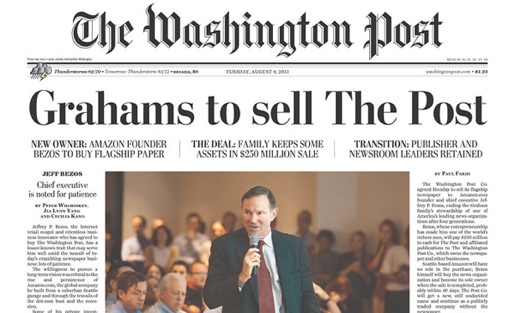 The front page of the Washington Post on Aug. 6. Photo from the Newseum.

The joke going around right now is that nothing will change at the Washington Post, but in two years you’ll only be able to read it on a Kindle.

After seven consecutive years of declining revenue, the Graham family has sold the newspaper to Amazon founder Jeff Bezos. As reported in the Washington Post, Post Company Chairman and Chief Executive Donald E. Graham explained that “The Post could have survived under the company’s ownership and been profitable for the foreseeable future. But we wanted to do more than survive. I’m not saying this guarantees success, but it gives us a much greater chance of success.”

"The changes in the offing will turn The Post upside down. It won’t even be the Post as we know it."

The Graham family bet on Bezos.

The Man from the Other Washington

Bezos and the Kindle

A changing of the guard is often accompanied by assurances that “nothing will change,” as it has been in this case. Bezos has left Katharine Weymouth in place as publisher and CEO of the Post,  and the editorial board and reporters are all still there. It was the only move to make, considering putting a new staff in place overnight is impossible — especially when Bezos doesn’t own a newspaper the size of the Post now.

But in terms of change, these pronouncements are the furthest thing from reality.

The changes in the offing will turn The Post upside down. It won’t even be the Post as we know it. That’s what disruptors like Bezos do — they change things with their ideas and with technology. Just take a stroll down to your neighborhood bookstore, or try to rent a videotape, or buy a vinyl record.

The first break to a new future starts with a new name. The company which owns the Post will be called something else, and it will be private. Bezos is the sole owner of the new organization. Another harbinger of change is that he didn’t buy the Post’s building, which he could have. Headquarters now has no real physical anchor, at least not where it is now. But many organizations don’t need large, expensive physical places to make things work anymore. They are virtual, outsourced spokes with or without a central core.

Whatever else the Washington Post is to Bezos, it is a black box. And what a nice black box to have. His plans have a very large playing field on which to take shape: form, content, power and influence are already in place. There are no boundaries, really. No walls to kick out. As reported in the Post, Bezos typically underplayed his hand. “I don’t want to imply that I have a worked-out plan,” he said. “This will be uncharted terrain, and it will require experimentation.”

I’ve covered Amazon and Bezos since the early days as an analyst for Gartner. Bezos has the money, but he doesn’t have much time. Whatever Bezos does with the Washington Post, including the remote idea of keeping exactly as it is now, it has to become a profit-making entity.

Bezos usually doesn’t reveal his plans. There is no separate reported expense for Research and Development for Amazon, so finding out exactly what financial efforts went into developing any particular piece is not possible.

Putting the Pieces Together

So what can we expect to change within the next five years and why? Here are some reasonable assumptions:

Can Bezos fail? Of course. Will he have to sell the newspaper? Maybe. Or worse, he may have to end the Washington Post if it doesn’t show a profit or fulfill other goals.

But at least the Grahams didn’t close down the Washington Post.

Poll: Which Tech Billionaire Will Buy a Newspaper Next? by Mark Glaser

Janet Asteroff is a writer and analyst in communications and technology. A former Gartner analyst for internet development and enterprise deployment, she covered Amazon and related companies. A consultant and writer for Merrill Lynch, IBM, Citibank and the Conference Board, Janet is a published author and speaker, and holds a doctorate in Communications from Columbia University. She can be reached at www.asteroff.com.

2 responses to “No Change? Jeff Bezos Will Turn the Washington Post Upside Down”