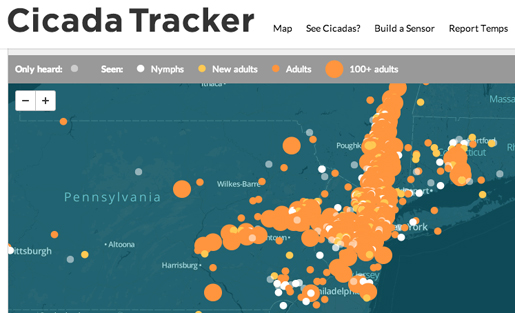 A new report examines WNYC’s ups and downs with partnerships and digital initiatives, such as this Cicada Tracker that included reports from home sensors.

Early in 2010, with the newspaper industry in precipitous free-fall, the president of the Charles H. Revson Foundation called on the head of New York Public Radio to see if the two could make common cause.

Revson president Julie Sandorf already had ventured into the future-of-journalism conversation the year before when Revson agreed to fund an academic report on the collapse of the newspaper industry’s revenue model and possible ways to counter its deleterious impact on serious local public affairs reporting. That experience pointed her to WNYC, the flagship public radio station under CEO Laura Walker’s watch. What other New York-based news and information outlet, Sandorf reasoned, already had embraced the ideal of high-quality local reporting, but also — and just as key — had in place an aggressive, successful fundraising apparatus that attracted revenue from multiple streams?

"The newsroom [at WNYC] is four times the size it was in 2001 with 14 of the 38 new newsroom hires since 2010 filling positions in the categories of digital, data or developer."

From there came Revson’s pledge of $1 million to WNYC, expressly to strengthen its capacity to report locally and accelerate its move into digital. (More significant funding from other sources has followed, but hat tip to Sandorf and the Revson board for this unusually open move from a legacy foundation.) Now comes an independent 55-page “warts-and-all report,” which WNYC commissioned me to do at Revson’s behest, to chronicle and document what the station has been up to since the funding announcement in October 2010.

The report examines WNYC’s ups and downs with partnerships and collaborations over the past 2 1/2 years, and its headlong move into digital initiatives and products, including the leadership role it has taken in the silent visual world of data-mapping. Plus, the report also looked at WNYC’s efforts to leverage mobile downloading for both user and membership growth; its particular struggles with metrics; and if and how well the station’s exponentially grown, now fully fused audio-digital newsroom is serving greater New York. There’s also a section on the station’s triumph in civic emergency reporting before, during and after Superstorm Sandy last fall.

To Walker, of course, that early conversation with Sandorf was music, but music familiar since long before the station’s desire to step up became imperative. In the tragic days after the Twin Towers fell on September 11, 2001, the leadership, editors and reporters of WNYC glimpsed a role they could aspire to play in providing serious metropolitan coverage. But at the time, for a newsroom staff of about a dozen serving a boutique-sized listening audience, it was a reach.

The ramp-up began. By 2005, WNYC put a strategic plan in motion that aimed to broaden its audience exposure with new platforms while remaining a “New York radio broadcaster and producer first and foremost.” By 2011, the station began an entrepreneurial, nimble approach to creating multi-platform content with ubiquitous digital products.

Among my report’s most striking findings, I think, are these:

The newsroom is four times the size it was in 2001 with 14 of the 38 new newsroom hires since 2010 filling positions in the categories of digital, data or developer. As a total aside, there’s been pleasant amusement at how enamored the digital natives on the staff become at producing great radio and how open the audio natives are to the benefits of producing for social media and the web.

Collaborations and partnerships almost always start from personal relationships -– data news teams are particularly good at this. But in the end, what matters most is perceived mutual benefits, common standards and expectations, a clear delineations of roles, a designated point person at each organization, a way to exploit the best of what each partner has to offer, and no pulling away of promised resources after the project gets underway.

Ideal collaborations, it turns out, have more “complement than overlap” in the audience or user-base each partner attracts and brings. Case studies of varying length examine both the huge successes and profound disappointments of WNYC’s experimentation in this area. Among the best have been WNYC’s work with New Jersey Spotlight for coverage of New Jersey; with ProPublica and Balance Media for data news projects; and with the consortium of public radio transportation reporters who comprise “Transportation Nation.”

Harder-earned lessons have come from the abortive collaboration with the New York Times for Schoolbook, which continues under WNYC’s watch; from an uneven distribution of burden in a project with Gotham Schools; from the low volume of production emanating from the New School’s Feet in Two Worlds and a difference in standards with CUNY’s Voices of NY.

Good and Bad of Data

WNYC’s data news chief, John Keefe, is highly persuasive in explaining why the silent visuals of data-mapping are “incredibly radio.” He demonstrates how the station’s big thrust into creating embeddable, open-source products has served to propagate the WNYC brand and increase the number of digital users while serving as a spark for some of the station’s award-winning reporting, from stop-and-frisk to Sandy. The tale of Keefe’s own path from WNYC news director in 2001 to self-taught coder/data-journalist a decade later, incidentally, is thoroughly inspirational.

Oh, the misery of metrics. What stats are meaningful or, more importantly, true? Arbitron and streaming data are separate, for example, so it’s impossible to know if WNYC’s boom in digital traffic represents new users or those shifting from live radio listening, where audience growth is flat. The embeddable data-mapping projects do appear to bring new users, some of whom WNYC clearly manages to retain, as it did during its extensive go-to reporting on Sandy.

Short, segmented podcasts — a digitally inspired adaptation of much longer scheduled radio programming — have also been a new plus. “RadioLab,” for instance, benefits from 5 million to 8 million podcast downloads per month. (For figures, graphics and charts of the various metrics prepared by Peter D’Amato, see the entire report here.)

And last, in this platform-agnostic era, the secret sauce of having origins in talk radio turns out to be — talk. The report is full of examples of how the station has made an ecosystem of live events it hosts and broadcasts as well as its regular programming and websites to lead and amplify engaged public conversations on everything from elections to the summer invasion of cicadas. These efforts grow out of the data maps (reporters almost always suggest what to map), tech innovations (like the cicada sensors) or significant street-level audio feature reporting. Like no other form of media, those digital darlings of the moment — crowdsourcing, conversation and community-oriented projects — are in public radio’s DNA.

Brooke Kroeger is a professor of journalism at NYU’s Arthur L. Carter Journalism Institute and the author most recently of “Undercover Reporting: The Truth About Deception” with its hand-curated, open-access database, undercoverreporting.org.