The Secret Behind The Turkish Protesters’ Social Media Mastery 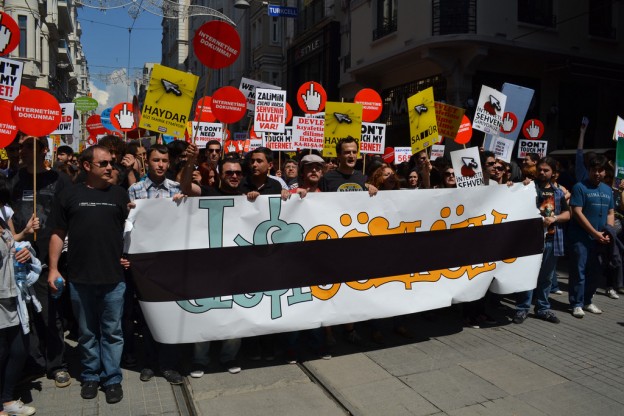 Since the end of May, thousands of protesters have taken to the streets across Turkey, using social media with great skill to propel their rebuke of Prime Minister Recep Tayyip Erdogan forward. Day after day, the protesters have leaned on Twitter and other social platforms to spread information and organize demonstrations, spurring the masses into action and regularly dominating Twitter’s list of worldwide trends in the process.

“We have seen one of the greatest media blackouts in Turkish press history. In this context, citizens could only rely on social media, especially Twitter, as news sources and also news making.” -Erkan Saka

In the age of social media, protesters often turn to social channels to push their cause, but rarely with the skill of those in Turkey. While the protesters’ widespread use of social media can be ascribed to many factors, the root of their social media skill and audacity can be traced back to a uniquely Turkish form of social media called the sozluks — a phenomenon that sprung up and thrived in Turkey years before Facebook and Twitter came into existence.

In Turkish, the word “sozluk” means dictionary, but the sozluks (there are many), while based off a dictionary format, are not what you’d expect from a merriam-webster.com. Instead, the terms on the sozluks are user generated, with many touching on current events, and the “definitions” often take the form of commentary, eyewitness accounts or links, tending to look a lot like a posts you might find on Facebook and Twitter today.

That said, after years of using the sozluks, Turks understood how to use Facebook and Twitter from the very beginning. Perhaps more importantly, the sozluks helped foster a free speech culture in Turkey which plowed the way for the fearless use of social media we’re seeing in the country today.

At some point in 1999, a Turkish web developer named Sedat Kapanoglu decided to act on an idea that came to him as he read “The Hitchhiker’s Guide to the Galaxy” two years prior. While reading the book, Kapanoglu liked how the “Hitchhiker’s Guide” functioned as “a standard repository for all knowledge and wisdom,” and figured he could turn that fictional concept into reality with the assistance of the Internet. After some thought, he set out to build it.

Kapanoglu’s goal was to make Eksi Sozluk a digital, user-generated, base of knowledge and he established a loose structure with minimal friction to help Eksi Sozluk achieve that goal. On the site, for instance, anyone could sign up with any username and add whatever topic they wanted to a scrolling list of entries along the site’s left hand side. Then, Kapanoglu let users append all types of descriptions to the topic, as long as they added some context to it.

Eksi Sozluk emerged at a time in Internet history, the late ’90s, where the most direct route to publish one’s thoughts on the web was to build a website yourself. When Eksi Sozluk launched, it turned that convention on its head, opening up a new channel where people could publish to the web with ease, in many ways pioneering the concept of Web 2.0 in Turkey. (Wikis were invented in 1995 in U.S., and Wikipedia launched in 2001.)

“I had no idea that I was creating such a big change in users’ experience on the web,” said Kapanoglu in a Skype interview, “And people adopted the experience quickly.”

The Rise of The Sozluks

Before he turned Eksi Sozluk into a functioning business, Kapanoglu held a job on the Windows team at Microsoft and, when his colleagues heard about the site’s success, they had a question: “Why is a dictionary one of Turkey’s most visited websites?” they asked.

The question was a fair one. Eksi Sozluk’s purpose — to define, and add context to, anything worth defining — was a bit unfocused and, despite its groundbreaking functionality, perhaps even a little unexciting. Nothing like it existed in the U.S., and for good reason.

But Eksi Sozluk filled a void in Turkey. Freedom of speech has always been a thorny issue in the country and the site became Turkey’s first open market for expression. When Eksi Sozluk was created, for instance, prosecutors had great discretion to bring action against people seen as violating Article 301 of the country’s penal code, which made it illegal to “insult Turkishness.” The law’s vagueness allowed prosecutors to imprison many of the country’s most prominent critics (an amended version remains in place today) and as a result, some viewpoints and information never saw the light of day.

When Eksi Sozluk came onto the scene though, it opened up the opportunity for anyone in Turkey to say whatever they wanted about any subject anonymously. They could now publicly express opinions about the government, the prime minister and their local officials in ways they never had been able to before. And they took full advantage.

“You could write anything on this website,” Kapanoglu answered his colleagues in Redmond. “They were really surprised,” he said of their reaction, “Because freedom of expression is so inherent or so natural in the United States, nobody expects that to be a benefit. It’s so embraced, so adopted by people already.” But, he said, that was not the case in Turkey, and Turks flocked to Eksi Sozluk to the point where Kapanoglu had to shut down new user registrations in order to still be able manage the website.

It’s worth taking a moment to note that the digital free speech culture Eksi Sozluk pioneered did not take off without opposition. In fact, the site is still under attack by Turkish authorities today. Kapanoglu said he regularly gets called into prosecutor offices and police stations and is made to answer for content posted to the site. Each time, he said, he works to explain that the content is user-generated and that he did not write or sanction it. “They still see it as a newspaper with editors,” Kapanoglu said.

At times, Kapanoglu revealed, the site even employs more lawyers than developers. But neither Kapanoglu nor the authors, who have been arrested at times, have been intimidated to the point of quitting. The site presses on.

As the wait to be accepted to Eksi Sozluk went from months to years, new sozluks popped up to give those shut out from Eksi an opportunity to participate in the Sozluk culture elsewhere. As a result, a thriving Sozluk author community built itself up in Turkey, bringing with it an understanding that when news would break, it would often surface first online before hitting the mainstream press, if it ever made it that far. If this sounds familiar, the same behavior can be found on mainstream social platforms today. Turkey, largely out of necessity, was just a few years ahead.

When Facebook launched in 2004 and Twitter followed in 2006, many Turks already understood how these platforms would work in their more mature stages and picked them up quickly.

“It’s not like Twitter is introducing some brand new ideas,” said Zeynep Tufekci, a sociology professor at UNC, originally from Istanbul. “There’s a generation that’s grown up with this stuff.” Twitter, she added, has not replaced Eksi Sozluk but the two have reinforced each other. A spike of activity around a topic on one, she said, often leads to a surge of activity on the other.

Ismail Postalcioglu, social media manager at McCann Erickson Istanbul, explained in an interview that parallels between the sozluks and newer social media platforms helped social media adoption surge in Turkey. The topics on the sozluks, Postalcioglu explained, acted as hashtags and the definitions were like the tweets. “When you give Facebook or Twitter to such a community, they already had that in 1999.” he said. “It’s just a newer version.”

For years, Turkey has ranked in, or right outside, the top ten global countries on both Facebook and Twitter and the sozluks, though discussed little outside of Turkey, are the unheralded force behind it.

The Sozluks’ Influence and the Gezi Park Protests

How Twitter is perceived in Turkey these days. From my FB feed, don’t know the actual owner. #occupygezi pic.twitter.com/RxqXRYXUAn

In the protests in Turkey today, many of the factors that led to Eksi Sozluk’s growth have come to the fore, so it’s no wonder social media has been used with such mastery. Instead of Article 301 keeping the mainstream media restrained, the Turkish mainstream press has largely censored itself out of fear of being hit by taxes and fees the government recently leveled against media organizations airing opposing viewpoints.

“I’ve never seen Turkish media so obedient to the government. Never,” said Erkan Saka, a new media professor at Istanbul’s Bilgi University in an interview in his office a week before the Gezi Park protests began.

The conformity showed days later as Turkish media chose to largely ignore the tens of thousands of protesters voicing their disdain for the government. In one widely cited example, CNN Turk decided to show a documentary about penguins instead of broadcasting live from the protest.

An “Offline Twitter” board set up in Gezi Park, showing the deep importance of social media there

In response, the protesters have taken to social media almost as a natural reflex. “We have seen one of the greatest media blackouts in Turkish press history,” wrote Saka in email after the protests began. “In this context, citizens could only rely on social media, especially Twitter, as news sources and also news making.”

With the mainstream media largely invisible at the start of the protests, the free speech culture fostered by the sozluks went into high gear. Photos of police crackdowns circulated furiously on Facebook and Twitter, as did criticism for the mainstream media. Social channels were viewed as a safe place to speak one’s mind, and also the best place to find out what was actually happening. Eksi Sozluk, meanwhile, served as a place to respond to disinformation and find context about the trending hashtags.

The images shared on social media propelled more and more people into the streets, and the fury intensified as the mainstream media only tepidly acknowledged the protests were taking place. Twitter, with little or no filter, played such a role in sparking the protests, that Erdogan declared it a menace, referring to social media as “the curse of society today.”

The Turkish government has now openly discussed regulating Facebook and Twitter and even requested the IP addresses of protesters it wants to discipline. But, just like the prosecutors who believe Eksi Sozluk’s Kapanoglu creates the content on his site, these actions are missing the point. The phenomenon they are trying contain emerged precisely because of restrictions similar to the ones they are trying to apply.

Note: This post has been altered to substitute a new screenshot of Eksi Sozluk. The previous one was a little off-color for our audience.

Alex Kantrowitz covers the digital marketing side of politics for Forbes.com and PBS MediaShift. His writing has previously appeared in Fortune and The New York Times’ Local Blog. Follow Alex on Twitter at @Kantrowitz.