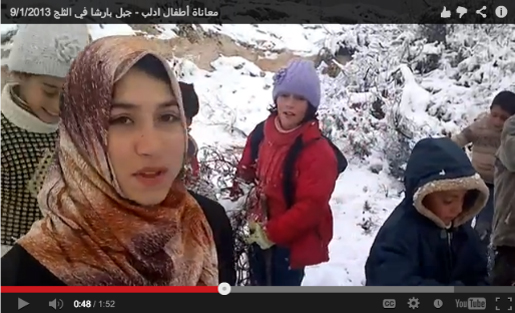 A screen capture from a video in the New York Times' "Watching Syria's War" project.

What a video doesn’t show is sometimes the heart of the story. Liam Stack, who curates citizen video at the New York Times, explains how he finds videos and tells the stories of the unknowns. “Watching Syria’s War,” a New York Times video project, presents the Syrian conflict through citizen video in a way that gives insight into everyday life during wartime and raises questions about what we’re not seeing.

"We may not know what happened to the survivors after the camera was turned off, but without citizen video we might never know that a bustling civilian neighborhood was hit with a missile at all." -Liam Stack

I interviewed Stack about the project. An edited transcript is below:

There are so many videos coming out of Syria every day. Whose videos do you feature on “Watching Syria’s War?”

Liam Stack: Our goal is to highlight videos that bring the voices of normal Syrians to our readers. The videos we feature generally come from either amateur filmmakers, a Syrian living his life in a conflict zone who may witness a bombing or atrocity and record it on his cell phone, for example; or activist videographers who put themselves in harm’s way to capture a moment of violence or a scene from combat. But there are limits to what we can know from this footage. Each video is a window into someone’s life that usually closes after a minute or two, and as such it is very hard to know for certain what we are actually seeing.

How do you find these videos?

Stack: The videos we feature come from a variety of sources. Some are YouTube clips that show footage originally aired on state media, which is becoming a more important source as the conflict moves into the heart of Damascus, territory where the government has remained in control.

The Facebook page for the Syrian Observatory for Human Rights, one example of an activist social media account that provides information and videos.

The majority comes from non-governmental sources, though. Syrian human rights and activist groups gather and disseminate video to international journalists and NGOs. Facebook is also a valuable resource, because different rebel groups, activist organizations and even cities and towns have their own Facebook pages where they post footage of events they may have witnessed (like this one, this one, and this one).

There is also a vast eco-system of citizen video on Twitter, where even a simple search for #Syria could return dozens of results on any given day. To deepen my search, I primarily use location names, like #homs and #damascus. For these searches and other research, my Arabic language skills are critical; without them, this entire world is inaccessible.

What qualities are you looking for in a video to help sift out a few telling ones from the rest?

Stack: The most effective posts on Watching Syria’s War are those that tell a story, however small. It is my great preference to post videos that feature people, as opposed to footage of damaged buildings or bombings filmed from a distance. There are a few technical considerations that factor into this equation as well: A video must be clearly and steadily shot so that viewers can actually see what is going on; it must be long enough to establish what is happening; and it cannot show extremely graphic violence.

In one video, a woman states that she is a prostitute and a spy. We don’t know if she was coerced, or what happened after.

I look for videos that highlight the uncertainties: If the viewer is left urgently wondering what happened to the people they have just watched once the video has ended, then I think the project has accomplished its goal for the day. There are a few posts that have really stayed with me. One featured the longest clip we have ever posted — 19 haunting minutes — and showed the men of a neighborhood in Aleppo frantically searching for the survivors of an airstrike that devastated their street. Another showed a young woman captured by rebel fighters who made her nervously confess on camera that she was a prostitute and government spy.

Both leave you wondering what chain of events led to the moments you see captured on film, and what happened to the people after the camera was turned off. In the Aleppo video there is a little boy with a gaping head wound pulled from the rubble — did he survive? In the video of the alleged prostitute — is her confession even true? How did rebels treat her, and is she still alive? These are things we simply do not know.

In those cases, when a video raises as many questions as it answers, what does it tell us? What is its value?

Stack: To go back to the 19-minute long video from Aleppo — we may not know what happened to the survivors after the camera was turned off, but without citizen video we might never know that a bustling civilian neighborhood was hit with a missile at all.

Men search for survivors among the rubble of an air strike in Aleppo.

Another real benefit is geographic scope. Citizen video enables us to get a glimpse of what life is like in a Zaatari refugee camp in Jordan, what it is like to ride into battle with the Nusra Front in Deir Ezzour and how internally displaced persons in the Idlib countryside are surviving the winter.

These videos provide us with so many things: evidence of atrocities committed by both the government and rebels; a chance to hear Syrians talk about the revolution in their own words; an opportunity to see rebel fighters in action and observe the weapons they use.

And how do you address the blind spots outside the camera’s lens?

Stack: One of the strengths of Watching Syria’s War is that it states that uncertainty very plainly. Each post outlines the many things that fall under the category of “what we don’t know,” alongside the things we do know, as well as any other videos that might complement or relate to the main video featured.

The most basic step is something that any journalist in any medium would do: Rely as much as possible on trusted sources who have a reliable track record. Another is to cross-reference videos; if multiple people are recording and uploading video of a bombing, then we can get a better sense of what happened. There are also international organizations like Human Rights Watch that closely monitor both the situation on the ground and the flow of citizen video from inside Syria.

How does social media play a role in your reporting?

Stack: Social media and YouTube have changed the way that reporters work across the industry, and that has been the case as well for foreign correspondents on the ground. When I was reporting in Cairo, it allowed me to identify and connect with possible sources, and it allowed me to learn about what was happening elsewhere in the country or city.

A child uses a water bottle and a pan to bail water out of a refugee camp.

That said, “Watching Syria’s War” is an entirely different way of using social media because, obviously, I am not physically based in Syria. In Cairo, if a YouTube video or series of tweets left me with questions, it wouldn’t be difficult to track down the answers, but reporting on the Syrian conflict from far away is another matter entirely. If I wanted to find out what happened to the injured little boy I mentioned earlier, it would be incredibly difficult. These social media tools are an incredible resource for journalists, but there are also real limits to what we can know about the world when we see it through the lens of Twitter and YouTube.

We’re seeing an increasing reliance on citizen reporting, including video, throughout mainstream media. What have you learned that you think all reporters could take from your process of finding citizen videos and using them in their reporting?

Stack: In Syria and elsewhere, the most important thing to keep in mind is that so much of what we know about the story comes to us mediated by someone else — a filmmaker who may have an agenda. It is essential for journalists to become comfortable with, and really fluent in, the various strengths and weaknesses of social media and citizen video, because the industry is only going to rely on them more and more.

Madeleine Bair curates the Human Rights Channel for WITNESS, a Webby-nominated collaboration with Storyful, hosted on YouTube. Follow her at @MadBair, and follow the Channel at @ytHumanRights.