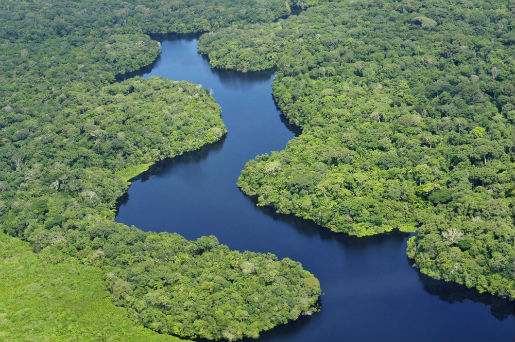 Aerial view of the Amazon Rainforest, near Manaus, capital of the Brazilian state of Amazonas. Photo courtesy of Neil Palmer with a Creative Commons license.

South America is home to the world’s largest rainforest, its greatest river, and some of its most challenging environmental problems, from pollution to deforestation.

Yet environmental issues are often overlooked by the region’s media, says environmental journalist and mapping expert Gustavo Faleiros. “In South America, environmental coverage is always a second-class issue. It only gets covered when there are extraordinary facts,” he said. “It receives fewer resources than more elite topics like finance and politics.”

"Let's give the right resources to these environmental issues, and see if their status on the coverage agenda rises" -Gustavo Faleiros

Faleiros and his partners at Brazilian environmental news website O Eco are working to change that. “We think it should be the other way around. Let’s give the right resources to these environmental issues, and see if their status on the coverage agenda rises,” he said.

With this in mind, O Eco recently launched its Environmental News Lab (EcoLab) to create tools to improve environmental coverage in Brazil and throughout the region.

A team of six is powering the EcoLab: Faleiros; O Eco journalist Giovanny Vera; Pixel, a web developer with São Paulo development firm Memelab; designers Luiza Peixe and Uiu Cavalheiro of the São Paulo firm Cardume, and Cardume senior developer Miguel Peixe. I talked with Faleiros, who is working with the EcoLab and O Eco as part of his ICFJ Knight International Journalism Fellowship.

Why is EcoLab needed? What problem or problems is it trying to solve?

Gustavo Faleiros: A lot of innovations that have already been practiced on financial reporting, political coverage and other subjects have not been applied to environmental coverage in South America — yet. We think there are appealing ways of telling stories about forests, oceans and many other natural resources by playing with data, infographics and maps. With the EcoLab, we are trying to improve reporting on environmental issues by applying new technology, and using heavily data-driven stories will help the public get more engaged with environmental news and policy.

Is EcoLab modeled on or inspired by any other projects?

Faleiros: Many of the concepts are coming from data journalism teams in newsrooms. You need to bring journalists, developers and designers together as we have seen at Brazil’s Estadao, Argentina’s La Nación, Texas Tribune and The New York Times in the U.S., and at many other media outlets.

We are also drawing on our own experience developing InfoAmazonia, where we learned a lot by working with Development Seed (the U.S. firm that created MapBox) plus Memelab and Cardume in São Paulo. I thought, and O Eco agreed, that this is the moment that we should create a space for more experimentation.

What are its goals?

Faleiros: In the next 12 months, we plan to launch at least five new or adapted applications to improve environmental reporting. These include:

Why are those relationships important to show in Brazil?

Faleiros: Documents and licenses are scattered among different government bodies. You need to show the connections between companies, governments and all the projects in which they have a shared interest.

Who is supporting this effort?

Faleiros: The project is supported by donors including ICFJ and the European Youth Press, which is training journalists on digital tools for environmental reporting. Internews’ Earth Journalism Network is supporting training activities as well and collaborating with the EcoLab on a geojournalism toolkit.

A lot of the ICFJ Knight International Journalism Fellows’ work focuses on spreading the use of tools and techniques and on building cross-border collaboration. Is that true for this project? If so, what is EcoLab looking for in potential collaborators or partners?

Faleiros: We want more partnerships and collaborators. That is why I believe it’s important to share what we’re working on. Then people with similar ideas can feel welcome to help or propose collaboration.

Some of these projects can grow with technical help from developers or insights from other designers and journalists. We are particularly interested in partnering with media organizations to see what products or content they can create with what we’re building. So we’re placing a lot of emphasis on distributing what we have done. We want other journalists using the maps of InfoAmazonia or creating their own mapping platform using MapPress.

Global media innovation content related to the projects and partners of the ICFJ Knight International Journalism Fellowships on IJNet is supported by the John S. and James L. Knight Foundation.