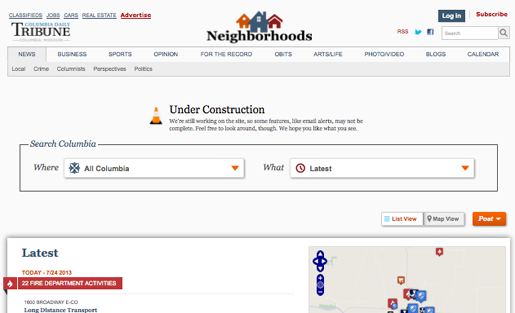 The Columbia Daily Tribune's new Neighborhoods site could excel where others have sputtered.

A little more than five months after NBC News shut down its hyperlocal product, EveryBlock.com, the original open-source application has been resurrected in Columbia, Mo. But although both products were born of the same Django codebase and Knight Foundation funding, visitors to The Columbia Daily Tribune’s new Neighborhoods site will see a different emphasis and a new hope for a project that has slowed under the weight of government disability and technical complexity.

The new site looks like it will excel where others have sputtered. Most importantly, it has an advocate at the top in General Manager Andy Waters, who has combined his own newsroom resources with the $90,000 he received from the Knight Foundation to give the site what seems to be a pretty good chance to live at least to see adolescence. The user interface is clean and smart, and the government data — which is the most difficult of any kind of data to mine — appears to be more current and complete than any OpenBlock installation has seen since the very early days before its code was made public.

"There’s a lot more that can be done with location-based and data-driven news and information -- both online and in print."

That kind of commitment is needed for OpenBlock to succeed, because pulling digital records out of all but the very most efficient and transparent government agencies is a tremendous drag on the expense side of the news business. That difficulty, though, can also create an opportunity for outsized revenue.

Chris Gubbels, the Web developer who’s been overseeing the project for The Tribune, said that unlike many jurisdictions, Columbia’s police and fire data were “pretty simple” to pull into OpenBlock. The police even provided The Tribune with an RSS feed of geocoded 911 response calls.

But the offerings of public government data are still short of what The Tribune hopes to have.

“We’re trying to get rezoning requests from the city; we’d like to do deeds of trust,” Gubbels said. Both Waters and Gubbels said that negotiations with government agencies have taken a significant amount of the resources needed for the project, and will require ongoing investment.

The New Business Cases for OpenBlock

The willingness to take on that kind of expense also means that OpenBlock organizations need leadership to imagine and execute a revenue strategy that is native to the product rather than using the application to merely drive up page views (and drive down demand for online display advertising space).

At one point, The Tribune was looking at making the OpenBlock service available to subscribers only. And, Waters said, they are still looking at whether the difficulty of obtaining some kinds of government data might actually provide an opportunity to charge for access to customers for whom certain kinds of public data are a critical piece of business intelligence.

None of that, though, means that the family-owned news company that reaches nearly 80 percent of the 130,000 adults in its market is sitting on top of the next LinkedIn or Google. Unlike all the other digital products The Tribune launches, it has set no benchmarks to measure the business success of the new Neighborhoods site.

“We’re not sure what the profit model is going to be for this yet,” Gubbels said.

At the OpenRural project, also funded by the Knight Foundation, we’re positioning OpenBlock as part of a multi-platform experience that local businesses can sponsor. Sponsorships will give a company permanent placement not just within certain data categories in OpenBlock, but also next to explanatory trend stories in the printed paper and at annual events about economic development, community health, education and public safety. This multi-platform approach is perfect for increasing engagement among a relatively small but incredibly loyal audience of rural newspapers.

The common realization that comes out of all the OpenBlock efforts so far is that the costs of launching the application remain high. The Tribune spent about $90,000. We’ve spent about the same … so far. The Tribune had to hire a computer science student to focus almost solely on the project all last summer. We’ve had to hire Django programmers at $135/hour.

Waters said that right now a newsroom that wants to launch an application like OpenBlock needs a Linux administrator, a Web designer and a Python programmer. But the biggest cost? Prying current and complete public data out of state and local governments.

“That’s not a technical issue,” Waters said. “That’s an issue that newsrooms need to tackle.”

In other words, you can’t outsource the very local job of helping your community understand how government decisions affect their lives every day.

Sometime in the next few months, The Tribune will open-source the improvements it’s been quietly and privately making to OpenBlock. The Tribune and I will work together to make sure their improvements and ours merge into a much stronger core. So the good news is that by the end of the year, the OpenBlock project is likely to see some new energy.

That’s good, because it needs broader use to unleash a lot of potential UI and financial creativity around location-based news. The Tribune, for example, has found a way to use OpenBlock to automatically generate print crime briefs on which a news clerk used to spend an hour a day retyping. If more civic hacking projects and news organizations and classrooms start using OpenBlock, innovations like that will come faster.

The Tribune has also moved away from thinking of proximity as the only important news value. It tweaked OpenBlock so that visitors can click on an arrestee’s name and see when and where else people with the same name have been arrested. The Tribune’s site relies on mug shots to help readers differentiate between multiple arrestees with the same name.

The OpenBlock Rural project here in North Carolina has developed improved coverage of geocoding and displaying events in unincorporated areas. That’s our personal itch, but The Tribune and others will soon be able to take advantage of our scratch.

There’s a lot more that can be done with location-based and data-driven news and information — both online and in print. And the best way to make it happen is to hop on to the OpenBlock discussion group and share the itch you want scratched in your community. We’re ready to help.

Correction: An earlier version of this story miscalculated The Tribune’s print circulation. The company reaches nearly 80 percent of the 130,000 adults in its market.

One response to “For OpenBlock, Big Improvements From Small Newsrooms”