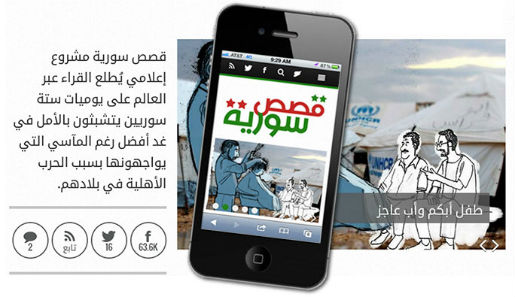 This article was co-written by Brian Williamson. It’s a first-person account of a project by the Broadcasting Board of Governors.

The news reports from Syria are dominated by casualty counts: 80 thousand… 90 thousand… 100 thousand people killed in the conflict.

"With parallels to other wartime diaries throughout history, the project was designed to share lyrical, poignant moments of despair and hope in Arabic from six civilians in the crossfire in real time."

Comprehension of Syria’s human suffering is desperately needed to keep the human cost in perspective. Journalists at the Middle East Broadcasting Networks (MBN) (part of the U.S. government’s Broadcasting Board of Governors) felt that a different approach was needed to give an Arab-speaking audience a deeper, personal connection to individual Syrians trying to survive.

Syria Stories is a new online documentary project from MBN that aims to tell the stories of the ongoing Syrian civil war on a very personal, human scale.

The mission was simple: Instead of focusing on ballooning death tolls or curating graphic video, we would focus on six — only six — individuals. We sought out people living inside and around Syria willing to share deeply personal, first-person stories with us.

With parallels to other wartime diaries throughout history, the project was designed to share lyrical, poignant moments of despair and hope in Arabic from six civilians in the crossfire in real time.

The initial release of www.syriastories.com (Version 1.0) was launched in March 2013 to persuade Syrians to securely nominate their friends and peers. In the meantime, MBN Digital partnered with the BBG’s Office of Digital and Design Innovation (ODDI) to design a responsive, secure website with an elegant display on any device (Version 2.0).

Syria Stories (Version 2.0) launched in June 2013 with a timeline and map of these diaries dating back to March 2011. Stories include how a famous actress divorced her husband because of her own political convictions; how a father spent hours looking for fuel and potable water to brew a meager cup of coffee; and a how a young man felt after his friend died in the hospital before he had a chance to apologize for a recent feud.

In three short months, the project amassed a Facebook community of more than 60,000 Arabs from the Palestinian Territories, Iraq, Egypt, Jordan … and of course Syria. These diaries are reaching the “walls” of more than 1.5 million Facebook users each week, according to Facebook Insights.

What’s more heartening is the compassion evident in the comments. Instead of the political polarization found on many Syria web pages, Arabs across the region are expressing signs of support for these Syrian characters with sentiment such as “God bless this writer.”

As the project moves forward, MBN plans to work further with ODDI to map the impact the project has in the next year as tens of thousands read, share, comment on simple yet insightful stories of survival and hope. And perhaps, if Syria witnesses a true solution to its conflict, we may have the opportunity to share the true identities of these six brave individuals with the world.

At the beginning, a list of several dozen Syrians was whittled down to six. MBN staff selected four men and two women from different ethnic and martial backgrounds. Louise, Furat, Waleed, Sindbad, Sasha and Basel.

We convinced them to commit to the project for a least one year. In order to do this, we had to protect them by concealing their true identities, faces and life details.

Sharing these ongoing personal stories creates an unusual challenge: We can’t use the participants’ names or photos as long as the situation on the ground remains uncertain and potentially very dangerous. Doing so would put the participants and their extended families at risk.

It’s easier to relate to a story if you have a face to connect with the storyteller. How do you help readers form emotional connections with the participants while protecting their identities?

Because we were thinking about the dispatches as diary entries, we decided to try using hand drawn sketches to illustrate the posts. There’s a tradition of using artists to illustrate the news that stretches from the 19th century reportage artists through Robert Weaver and Alan Cober to the comics journalism of Joe Sacco. We were also inspired by George Butler’s reportage drawings from Syria.

In order to help readers connect with the participants, we wanted to create a unique portrait for each author. As we experimented with a range of styles and possible portraits, we talked about cartoonist Scott McCloud’s spectrum of representation from photorealism to abstraction and the way that effects how readers relate to the character.

We wanted to strike a balance with the portraits — making them specific enough that they reflected the individual stories, but not so precise that they implied that they were literal representations of the authors. The final drawings are based on the general biographic information we were provided for each participant.

The Syria Stories project is being maintained by a very small editorial team. In order to illustrate the posts we needed to devise a system that would allow editors to easily repurpose drawings for new posts.

We decided to create an evolving library of sketches for each participant with different expressions and poses that can be layered over blurred out documentary photographs from the time and region described in the posts.

An illustration from the “Syria Stories” project over a November 2012 photo of a displaced camp, in the Syrian village of Atmeh, near the Turkish border with Syria. Courtesy of BBG

An illustration of the “Syrian Stories” project of a destroyed school is seen in Homs in July 2012. Courtesy of BBG

The drawings are saved as layered Photoshop files, separated into ink and paint layers that can be turned off or on depending on the background. In this way, we’re hoping to maximize the different illustrations that can be remixed from the library of drawings and photographs. As the participants continue to share their stories in the coming months, ODDI will provide ongoing design, illustration and development support to help visually tell their stories.

This story was originally published by the the Broadcasting Board of Governors’ Innovation Series.

Brian Williamson is the senior UX designer for the Office of Digital & Design Innovation. Follow him on Twitter: @drawinghands.

Davin Hutchins is editorial director at MBN Digital, the digital division of Middle East Broadcasting Networks that includes Alhurra and Radio Sawa. Before this, Hutchins was managing editor of Middle East Voices at Voice of America where he conceived of an Arab Spring social journalism site which won the Topical Reporting category in the 2012 Online Journalism Awards (ONA).  Follow him on Twitter: @HutchDC.

The Office of Digital & Design Innovation (ODDI) is a part of the Broadcasting Board of Governors (BBG), a U.S. government agency.  ODDI works with technology to improve US international media news and information. We look for the best solutions to the biggest problems in creating, distributing and improving news and information in multiple languages around the world.  Our job is to find those journalists most able to apply innovation in digital media and get them what they need to implement. We spend an extra focus on opportunities that engage and catalyze audiences to participate in the improvement of our journalism.  Our [email protected] blog documents and facilitates a worldwide conversation about media innovation.