Collaboration Is a Key Pillar to Keeping Investigative Journalism Alive 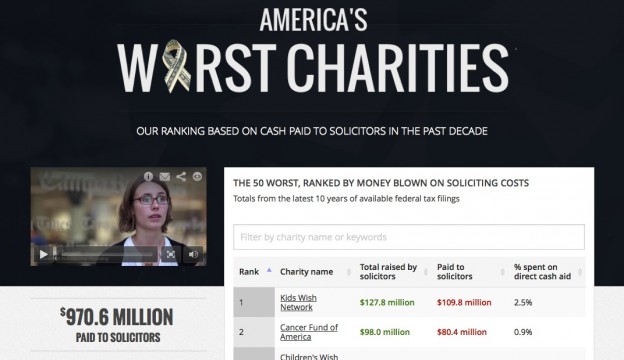 The America’s Worst Charities project brought together the Center for Investigative Reporting and the Tampa Bay Times.

Collaboration is more than just a buzzword.

It could be one of the pillars that keeps investigative journalism standing.

"Sure there is still competition in local markets and some scoops too good to share, but in many cases we no longer hoard ideas, sources and institutional knowledge. Collaboration is the new reality."

Look at some of the most recent examples of investigative projects that are making a difference:
The International Consortium of Investigative Journalists worked with 86 investigative journalists from 46 countries to shine light on the seedy underworld of offshore tax havens.

A congresswoman has asked for a Department of Justice investigation into 50 charities in the wake of the America’s Worst Charities project by the Center for Investigative Reporting and the Tampa Bay Times.

I could go on, but I’m sure you see the point: The traditional walls that once stood between media organizations are crumbling. Sure there is still competition in local markets and some scoops too good to share, but in many cases we no longer hoard ideas, sources and institutional knowledge. Collaboration is the new reality.

The America’s Worst Charities project by the Center for Investigative Reporting and the Tampa Bay Times.

That doesn’t mean working together is always easy; in fact, it rarely is. All of us have seen how hard it can be just to get two people in the same newsroom to collaborate. Now, in the new journalism landscape, organizations are working with others scattered across the country to turn investigative projects.

People from those organizations might have different skill sets, backgrounds, priorities, and, not least of all, schedules. Collaborating on a project can add weeks or months to the timeline, but that’s better than a project sitting uncompleted because one organization is stretched too thin.

Collaborative projects also need to have a clear chain of command — it’s far too easy for tasks to fall by the wayside or for the project to lose focus if there is no clear leader. That leader needs to be sure there is a strong vision, an effective working structure, and frequent communication among the group.

All the members of the group also have to buy-in to the project. For journalists, that means these projects have to be relevant to their organization and to their audience.

The International Consortium of Investigative Journalists worked with 86 investigative journalists from 46 countries to shine light on offshore tax havens.

If it can be difficult or complicated to work together, why is it becoming so common?

The quick answer is, because many times there is not a choice. As news organizations trim budgets and staff, these investigations are simply not going to get done any other way.

Let’s look at the ICIJ tax haven investigation as an example. That took 86 people in 46 countries. No one except the very largest media organizations might have the staff or budget to produce a project like that on their own. But working together, these smaller newsrooms were able to produce an important data- and document-driven story.

As it did for ICIJ, collaboration can cut expenses for travel and help broaden the scope and context of a story. It can also bring new skills and more diverse thinking to newsrooms.

While, yes, it’s a challenge to bring together people with different backgrounds, skills and priorities, that diversity is also one of the biggest arguments for collaboration. Newsrooms without a trained data reporter can get help from another organization. Reporters can partner with ethnic media to work on a culturally sensitive issue. And a health reporter on the East Coast can team up with an environmental reporter out West to do a project on a public health issue.

The two organizations have teamed up to hire an INN/IRE director of data services, a position for which I was lucky enough to be chosen.

My job is to help the INN members gather and analyze data, and complete projects that make an impact. I also will act as a liaison to help INN members plug into the resources at IRE to guide our analysis and reporting.

In fact, one of the main goals of this position is to widen the use of the IRE Database Library, which houses dozens of federal databases that have been cleaned and standardized and are ready to be used in reporting. Some of those databases are widely used, such as the bridge inspection database that became well known among newsrooms after the Minnesota bridge collapse in 2007. Other sets might be underutilized, and it’s my job to help INN members tap into some of those.

Likewise, some of the INN members might work together on a regional or national project for which we put together a new dataset at the library. After the INN project, that database would become available in the library for IRE members to use.

INN also will be searching for funding for some of the projects, providing another resource for members who are all working toward finding a sustainable model for non-profit journalism.

Our hope is that this collective power will become the new normal and that news organizations working together truly are stronger than one.

Denise Malan became the INN/IRE director of data services in June. She will provide occasional updates on INN data collaborations and lessons learned for MediaShift.