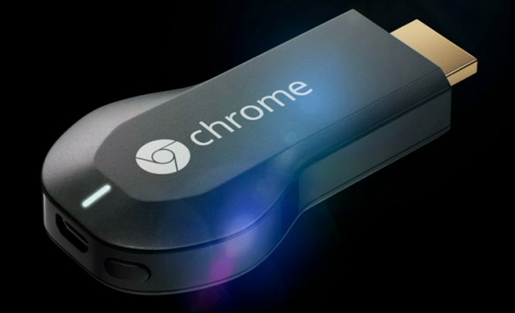 Could the cheap $35 Chromecast device shake up the world of TV?

Google Chromecast will break open the TV ecosystem unlike anything we’ve seen in years. Forbes calls it a game changer, but mostly because it has functionality similar to Roku and AppleTV, but costs only $35 (and with 2 free months of Netflix right now, it’s a net cost of really $11 if you don’t have that service already).

They are missing what’s most compelling about Chromecast and what it will mean for multiscreen programming, TV, mobile and tablets.

"Google TV and Nexus Q were poorly conceived products with even worse execution - but Chromecast is different."

Aside from the low price and the core functionality — the ability to beam audio and video from companion device to a TV — Chromecast is significant because it is the first solution in the category that will be cross-platform and have scale. Cross-platform once meant Windows and Mac, but now it means desktop (via Chrome browser), iOS and Android. This means that developers and publishers will be able to create apps for mobile or tablet, or websites in the Chrome browser, with identical functionality. This will affect the most popular media apps, such as Netflix, Hulu, Pandora and Spotify. Assume every one of the big apps will have this functionality. Every app you see on Roku or AppleTV. This also levels the playing field for a smaller and more diverse set of publishers and media companies. Chromecast will be a trivial purchase to bring even niche channels to the TV.

Despite the presence of native apps on Apple TV, the killer feature — AirPlay — showed us all that the “companion” device (mobile, tablet, laptop) is actually the main device. And the TV is the companion. It’s just a display.

Furthermore, Google appears to have taken a very open, developer-friendly approach to its Google Cast Software Developer Kit, which, along with the low price for consumers, should foster quick and early adoption.

What does this mean?

Google TV and Nexus Q were poorly conceived products with even worse execution — but Chromecast is different. Both were overcomplicated. Chromecast leverages demonstrable consumer behavior with wireless media receivers, and marries that with the mobile ecosystem.

Roku has sold 5 million devices, and Apple has sold 13 million AppleTV devices. Those are good baselines. Chromecast devices could easily outpace that 13 million.

4. The set-top box as we know it gets closer to death.

Those devices, even as advanced as Comcast’s gorgeous new X1, won’t be able to keep pace with innovation in the open consumer electronics world. And they shouldn’t have to keep up.

5. Walled gardens will be broken.

This will make it harder for programmers and operators to treat streaming video to the TV differently. HBO Go embraced Apple TV after a long holdout, yet Showtime Anytime continues to block AirPlay support. Chromecast, widely adopted, will make it more difficult to preserve these artificial barriers without creating friction and frustration with viewers. If it can play in Chrome it should be able to play to Chromecast.

6. A tipping point for streaming media.

This gets us closer to a tipping point in which more programming to the TV comes through Internet streaming than traditional means. In the AirPlay-enabled homes that I know, behavior has shifted. Netflix’s kids shows beats cable video-on-demand every time because of the amount of choice, personalization and ease of use. Apps beat channels.

Another fun side effect will be in meeting rooms. We are already seeing Apple TVs pop up in many conference rooms, as an easy cordless way to deliver presentations. Chromecast, because of its cost and the developer-friendly approach Google is taking, will make inroads into the business world as well. Consider that a bonus.

Google’s Chromecast Could Cause Surge In Subscribers For Netflix, Other Streaming Providers (Forbes)