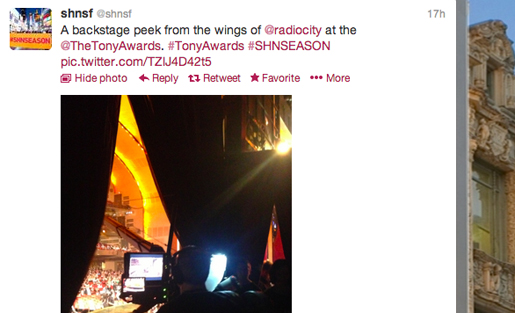 Sunday night wrapped up another year on Broadway with the 67th annual Tony Awards hosted by Neil Patrick Harris, showcasing some of the best theater of the 2012-13 season. And while the East Coast and Midwest watched and tweeted away, the West Coast was left to wait three hours for the exact same show to begin, leaving many to wonder: In today’s social media-driven times, why does an event like the Tony Awards still air on delay?

To help alleviate the problem for people on the West Coast watching a tape-delayed show on TV, the San Francisco theater company Shorenstein Hays Nederlander (SHN) actually ran “tape-delayed” tweets so that people could follow along on social media as if the event were live.

"In today’s social media-driven times, why does an event like the Tony Awards still air on delay?"

With nearly 70 percent of the U.S. population being on at least one social network, according to a recent Pew Internet Social Networking Study, it’s becoming increasingly difficult for West Coast viewers to avoid spoilers for big events like the Tonys, not to mention the more widely viewed Grammys and even popular television shows like “Shark Tank.” Countless tweets throughout the night confirmed this.

Ironically, even the LA Times, one of the West Coast’s most prominent media outlets, couldn’t resist posting spoilers to their Twitter feed, stating: “All our #TonyAwards coverage in one…(Spoiler alert to West Coasters: We are reporting live.” To which one follower replied, “The LA Times is announcing the Tony winners, making it somewhat moot to watch on the West Coast.”

Beyond just spoilers, West Coasters tend to miss out on real-time event coverage too. As stars walked the red carpet and mingled backstage at this year’s awards, a steady stream of updates could be found on Facebook and Twitter from various press outlets. But by the time the Tonys aired out west, most major news outlets were done posting for the night.

Even the Tony Awards’ second-screen experience, while an innovative addition to this year’s show, was catered to the East Coast audience. Viewers could follow along to get trivia, facts, and other fun updates that ran in tandem with the 8 p.m. Eastern Time show.

“LIVE” TWEETING ON THE WEST COAST

One theater company out west, Shorenstein Hays Nederlander (SHN) in San Francisco, recognized the challenge for West Coast viewers and came up with a plan to provide a special “live” experience for its community.

“When it comes to being a part of the live experience at major events, West Coasters are frequently subjected to the dreaded ‘previously recorded’ message,” said Scott Kane, chief marketing officer at SHN. “We felt it was important to give Bay Area Broadway fans a reason to watch the show on Pacific Time, and not follow their Twitter feed during the live version.”

To do this, SHN worked with the Tony Awards to become a credentialed media outlet, giving them behind-the-scenes access to all things Tony. “This gave us the opportunity to collect content in our voice and create content specific to the San Francisco Bay Area,” Kane said in an interview. More impressive, SHN was the only theater company outside of New York to be given complete access to the Tony Awards this year.

Throughout the West Coast broadcast, SHN posted and tweeted ongoing coverage, giving social media fans and followers the feeling that they were watching the show live, getting their own special sneak-peek. Beyond just posting the winners and reactions to speeches, SHN provided unique clips that they had taken and edited throughout the day, some of which included Q&As with Neil Patrick Harris, and moments from dress rehearsal. When Patti Lupone presented, SHN comically tweeted: “We love Patti Lupone! She’s so much better than fake Patti Lupone during rehearsals,” with a video link to the stand-in from that morning’s dress rehearsal.

SHN also used the delayed live-tweeting to announce its fifth show of the season, “Pippin,” at the end of the night.

While showing the Tony Awards at the same time across the United States would be ideal, it is far easier said than done for a number of reasons.

As an LA Times blogger stated in a 2012 piece about the tape-delayed Grammys:

“As for the argument that keeping the Grammys on tape delay is an outmoded way of thinking in the age of Twitter and Facebook, a CBS insider counters that people tune in to the Grammys more to see performances than to see who wins…Some at CBS think the social network chatter actually helps promote the show for the West Coast.”

So in the meantime, while the Tonys continue to be delayed, it will be interesting to see if other news outlets, or even the Tony Awards themselves, follow in SHN’s footsteps, providing unique “live” tweeting for the West Coast community.

With the increase in new social media channels – the latest being Twitter’s new video app Vine  – viewers are going to expect to receive more updates year-over-year across multiple platforms regardless of time zone.

Amanda Bohan is the founder and president of Amanda Bohan Marketing, a digital marketing & social media strategy company that works with arts & entertainment clients, as well as a variety of growing businesses and start-ups. Follow her on Twitter at @amandabohan.