How Student Newspapers Can Survive (and Thrive) in the 21st Century 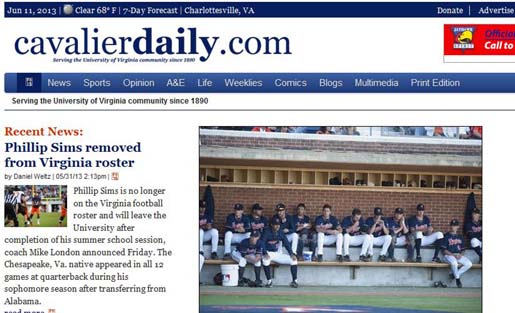 Matthew Cameron, a recent University of Virginia graduate and Cavalier Daily staffer, put together a 136-page thesis on the current state of college newspapers.

During his senior year at the University of Virginia, recent graduate Matthew Cameron put together a 136-page thesis on the current state of college newspapers.

Here it is, in seven words: Student papers are hurting, but there’s hope.

"At this point, daily printing is not necessarily the best way to reach the student audience and certainly not the most cost-effective way on a lot of campuses." -Matthew Cameron

That’s summing it up — not selling it short. Cameron’s scholarly effort provides a fascinating glimpse into the big-picture challenges and opportunities college media face.

Atop this outside research, he drew upon his firsthand experiences.

While at UVA, he was a dedicated staffer for The Cavalier Daily, the school’s 123-year-old student newspaper. Beginning in January 2012, he also oversaw its operations for a full year as editor-in-chief.

In a recent interview about his thesis, Cameron laid out three main suggestions informed by his research aimed at helping campus media adapt, survive, and thrive in the current press landscape — what he calls “the new news.”

“I think student newspapers will continue to serve their campus communities,” said Cameron, who will soon begin communications consulting work. “But there is a different way for them to fulfill their missions that is cost effective and sustainable for the 21st century.”

In his words, “Student newspapers can do a lot more with different types of technologies and different ways of distributing their content that don’t entail the heavy costs associated with daily printing, delivery, and paying large numbers of staff people.”

In his view, student journalists need to adjust, at least temporarily, to the realities of the current climate. “Student staff shouldn’t expect the same compensation they did in the past,” he said. “You can do a lot with just using a website, social media, and a small staff of engaged reporters working to produce content — content that is then distributed in lower-cost ways than the traditional print-first model.”

Over the past few semesters, there have been public fights started by individuals at a number of high-profile universities aimed at keeping their schools’ student newspapers in print daily. One irony Cameron came across in his research: This “daily fight” in many cases was over long before it began.

“Papers today tend to think of their daily print presence as fundamental to their existence,” he said. “But on a lot of campuses, it hasn’t always been like that. For a majority of some papers’ existences, they actually haven’t been daily. During World War II, for example, plenty of papers cut back to printing once a week and continued to produce news for their campuses and fulfill their mission. During the ‘70s, ‘80s, and ‘90s, it became financially feasible for some college newspapers to print five days a week … We’re seeing now that the economics have changed. At this point, daily printing is not necessarily the best way to reach the student audience and certainly not the most cost-effective way on a lot of campuses.”

Cameron’s second suggestion: Conduct regular surveys or focus groups of student readers about what they want or need in a news outlet.

His research revealed that a surprisingly high number of student newspaper editors and advisers are not aware of how, how often or how much their publications are being read.

“That to me is a red flag,” he said. “Each student newspaper should carry out its own market research to determine how much it is being picked up and what an audience looks for in terms of news. Is it gathering it through social media, mobile apps, a traditional print product? Only once that process takes place can informed decisions be made about how often college newspapers should be printing and how much money they should be spending on the legacy format of media.”

The survey answers were enlightening this past year at the Cavalier Daily. “We found that people were becoming less interested in the print paper,” he said. “Then when we looked at our pick-up rates [the amount of copies grabbed from newsstands around campus], the numbers we found confirmed the papers weren’t being picked up as much as they used to.”

Cameron’s final suggestion: Remove the administrators, but keep the professionals.

Based on his research findings, Cameron said student newspapers should ideally be structured as 501(c)3 non-profit organizations so they can maintain a greater degree of financial and operational independence.

“We’ve seen time and time again, dating back to the ’60s and ’70s, that when student newspapers either investigate things that may cast their university in a bad light or make business decisions the university doesn’t like, it can lead to [university] presidents or boards of regents meddling in the newspaper’s affairs,” he said. “Being a 501(c)3 isn’t the only way to address that issue, but it is something that has worked for a number of the organizations I’ve studied.”

While pushing for minimal administrative involvement, Cameron does recommend that papers have professional staff in place to support students and provide institutional knowledge.

“With things like graduation and study abroad, there is a ton of turnover at college newspapers,” he said. “With so many student staffers coming and going, it’s tough for papers to maintain the expertise they need to carry out long-term projects or innovative digital newsgathering work. That’s why I recommend professional involvement. If you can hire somebody who’s on staff for multiple years and can offer a source of institutional memory and also some expertise in financial and technical matters it can be very beneficial to an organization whose staff is otherwise turning over every other year and not consistently executing long-term projects.”

Amid the high staff turnover rate, declining print pick-up rates, and decreased pay rates, Cameron is ultimately optimistic about the future of the student press.

“The passion that exists among a lot of students for their papers is really the biggest asset they have,” he said. “The fact that you have a lot of people still flocking to them, and in some cases volunteering their time, a lot of their time, to produce them is a big plus. Those people will be the problem-solvers, the ones who find solutions for the organizations. My optimism is tempered somewhat by the bureaucracies a lot of student newspapers have to deal with. At the end of the day though, students can and will innovate.”

Dan Reimold is an assistant professor of journalism at the University of Tampa. He writes and presents frequently on the campus press and maintains the student journalism industry blog College Media Matters, affiliated with the Associated Collegiate Press. His textbook Journalism of Ideas: Brainstorming, Developing, and Selling Stories in the Digital Age was published in April by Routledge.