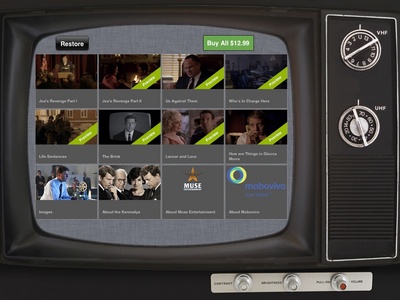 The purchasing screen for The Kennedys app from Mobovivo.

The second screen is a new and exciting place for the media. Everyone is scrambling to figure how to best utilize it and engage users there. Research shows that a growing number of people are using multiple screens at once. The entertainment industry has latched onto this idea. Movies, television shows and live broadcasts are all creating second-screen experiences to engage the audience.

As the news media, though, we are not there yet. So during pitch week, our team at Reese News Lab became interested in creating a product that would solve this problem. We had several ideas but no clue which ones were viable. This led to some basic user testing to help us determine which products were worth pursuing for the summer.

We knew that we wanted to present information beyond what was on the broadcast on a second screen, but we weren’t sure what kind. Our research showed that social media and sharing was also popular for second screens. We also needed for it to be profitable, so we looked into the following:

"Our users had to dictate our product. It would be worthless if people weren’t interested in using it."

So we set out into the world doing random, brief tests with people around campus to test these ideas. We also sent out surveys to collect data regarding people’s behavior regarding news and second screens. To make a long story short, we are not actively pursuing any of these ideas.

We quickly found that users treated the second screen as their space, and they wanted to control it. The supplemental information was overwhelming. People often went to their second screen as a cure for boredom when they were watching the news. It wasn’t more information that they wanted; it was engagement. Location augmentation was met with similar results. Although it seemed like a cool concept, people weren’t really interested in exploring locations, and it just distracted from the onscreen content.

While we didn’t completely rule out interactive ads, they have been “parked” for now. Our test users didn’t like their interactions with a second screen being interrupted. While the concept of a game ad was fun, it reminded people of pop-ups. As for sharing, people were not looking for another platform to share and interact with others. They preferred sharing using social media options or in-person conversations.

While we don’t have any definitive data to prove that these ideas aren’t viable, we were definitely met with more resistance than we had time to overcome in the 73 remaining days. This brought us to problem two: We were two weeks in and had only decided on one of the two required products.

Time for a change-up

We had established that we wanted to pursue a second-screen product, and we had collected a lot of data and articles about the new, growing phenomenon. As a venture capitalist told us, though, our users had to dictate our product. It would be worthless if people weren’t interested in using it.

We headed back to the drawing board to look at our other ideas. There were actually a few ideas that we had “parked” earlier that began to intrigue us more. What could we do for the Hispanic population in the United States? We couldn’t put ourselves completely in their shoes, though, so we watched a Spanish news broadcast. We began brainstorming ideas and learning more about Latino culture from our Hispanic coworker.

We finally had it. We would try to build an app for Spanish-speaking viewers that provided basic information about each story. It would be only the basic content from the broadcast in order to compliment and clarify the stories. Our hope was that this would allow viewers not fluent in English to better understand the broadcast.

While we are currently designing our first prototype, this is what we will be pursuing for the rest of the summer, and we are receiving a lot of positive feedback. We’ve talked with potential users and with broadcasting companies who are interested. I can’t say what this will look like come August 8 (Pitch Day!), but this is definitely an idea that we are more confident in building.

Oh, and did I mention that we did all of this in 24 hours? But we’re back on track, and you can test it for yourself … just give us some time to build it!

Lincoln Pennington is a freshman in the journalism school at UNC Chapel Hill with a second major in political science. He works as a staffer for reesenews.org and tweets from @Lincoln_Ross. He is a politics junkie interested in the future of the media and hopes to work in D.C. upon graduation in 2016.

One response to “Reinventing the Second Screen: Let’s Try This Again”